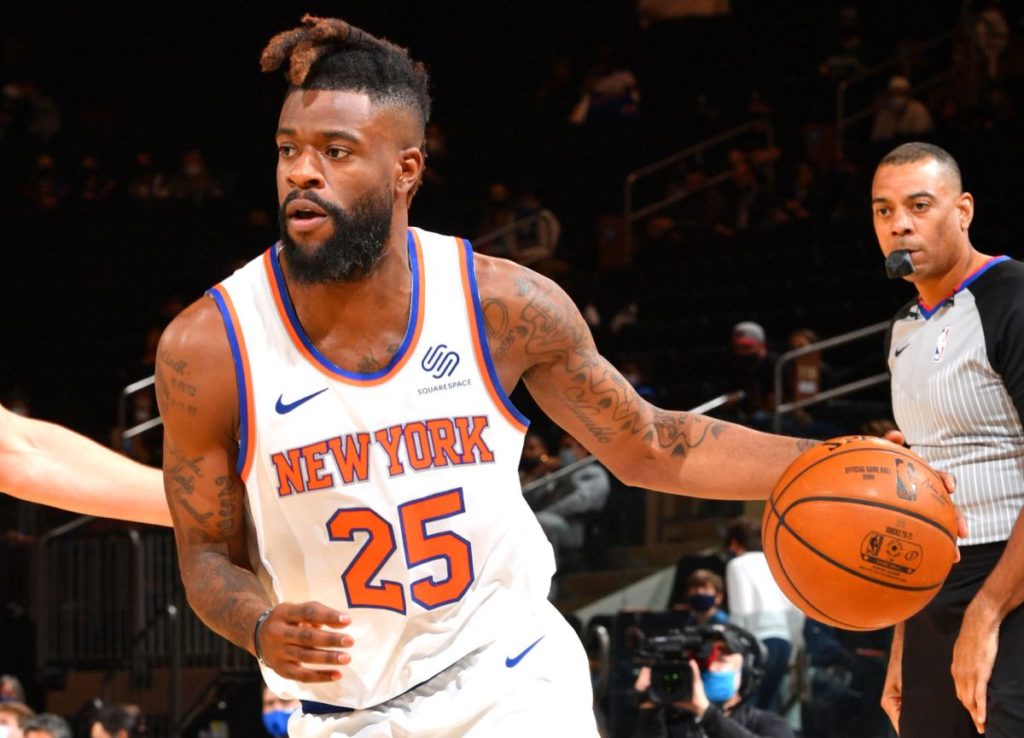 America is the land of free expression. You’re free to say what you want, act like you want, and rock any kind of hairdo you choose.

But now we’re seeing the boundaries of hairdo liberation being pushed to their aesthetic and psychological limits in the NBA playoffs. As I was watching last night, I could not stop wondering about what a bunch of the players were doing with their hair. The games themselves could not be focused on with enough analytical intensity because the hairdos were getting into the way of my basketball thinking.

Let’s start this intellectual journey with New York Knicks player Reggie Bullock. He’s got what looks like three dog poop logs hanging forward on the top of his head, and another one laying forlornly and alone in the other direction. It’s like a dog poop meadow or pasture or something outdoorsy.

Last night I studied this guy’s hairdo while watching with a friend of mine. We tried to figure out what was on the guy’s head, threw around several different possibilities before I said it’s dog poop and we settled on that.

At first, we thought it was a rhinoceros horn look of some sort. We did some Google searches looking for something to compare the guy’s hair to. In the end, we came up with nothing tangible besides a picture of some snail’s whiskers or something. Besides the dog poop motif, nothing else made any sense. There were no analogies, no real-life comparisons, nothing we could grab onto.

Which made this cat’s hairdo a bona fide enigma. It’s as if he woke up in the morning and said to himself “I’m going to get my hair done up today in a way that no one will ever understand and in a way no one has ever gotten a hairdo not even in the time of the dinosaurs.

“No matter how hard they try, they won’t be able to figure out what it is,” his thoughts continued. “It will puzzle them and confuse them and confound them. They’ll take pictures of my hairdo and put them in the Natural Museum of History for people to come and look at for centuries to get themselves really baffled. That’s the hairdo I’m going to get.”

Now I’m all for messing around. One time I spray painted the word “Wednesday” all along the right side of my chocolate brown Chevy Impala; on the other side, I pained “pie R squared” – that algebra formula or whatever.

So I get doing things that don’t make sense so that people will wonder about you. So maybe that’s what this guy Bullock was doing. Or did he want his head to look like it had three dog poop logs on it because he likes dogs? But really, who has ever had that thought? Uh, no one. Ever. Maybe he’s just messing with our minds.

Whatever his reasoning, he wins the award for the most insane hairdo in the NBA right now. That’s saying a Grand Canyon when you consider one guy, Willie Cauley-Stein, had teal-colored tinsel sparks at the end of his hair strands last night in his playoff hair show for the Dallas Mavs.

But let’s stop mucking around in the dog poop. There were other less conceptually disgusting – though equally disconcerting — hairdos worth noting in last night’s playoffs.

Did you check out Danilo Gallo Gallinari? He’s rocking his perfectly shaven, ugly as a horseshoe crab playoff mohawk. No doubt he got the inspiration from Clubber Lang, who in Rocky III had the all-time largest, most bushy, and most scary-looking mohawk in the history of mohawks.

Gallo’s mohawk unsettles you. So you have to ask: “Why Gallo, why the scary mohawk? It doesn’t make you look better? It makes you look kind of crazy? You think by looking crazy you’ll shoot a higher percentage from behind the arc? You think other guys will be afraid to guard you? You think there are some women in the stands who’ll be attracted to a guy with a batnuts mohawk?

Gallo’s reasoning could be any number of things. Most of those reasons probably aren’t very good ones especially if he’s looking to generate more endorsement deals and get married and settle down.

But Gallo did what Gallo had to do. Personal branding gone awry.

Speaking of going awry, did you check out Kyrie Irving’s look? While the rest of the league has gone psychedelic and insane asylum with their hairdos, Kyrie the basketball genius has taken us back to the days of Freddie Boom Boom Washington on “Welcome Back Kotter.”

Kyrie, who didn’t play much during the regular season because he was focused on his hair and other things non-basketball-related, sports the large round mound of hair that’s been perfectly groomed. We used to see hundreds and thousands of guys wear the Kyrie hairdo in the late 60s and 70s. So it feels like some sort of time warp looking at Kyrie’s new look.

Kyrie goes back forty years while other guys in the NBA go all Star Trek Enterprise 2002 Space Galaxy Trip To Netherworld cow pastures. How are we so supposed to know what age we’re living in?

While watching the NBA playoffs, we’re not watching basketball as much as a hairstylist art show about how people will look 3,000 years from now.

What does this all mean? Is hair becoming the ultimate form of self-expression and freedom from all laws and government overreach? Are we in a big mind game with each other trying to make each other not understand what we’re doing with our hair? Is how you wear your hair becoming some sort of psychological power play?

I’m not sure. But that dog poop hairdo sure doesn’t make any sense to me. How could it? Who does that? And for what purpose?

Dog poops, scary mohawks, Boom Boom Washington – it’s too much to process. It’s a vast wasteland of wonderment and hysterical confusion. There are no answers. Only questions.

So here’s my question for you. When I go to the barber today, should I have him shave “Wednesday” across the top of my head or “pie R squared?” Or should it be an intersecting blend of the two, like two railroad tracks crossing on the top of my noggin riding into the sunset?

It’s a hairy question. I know. But doesn’t it feel good to let your hair down once in a while?