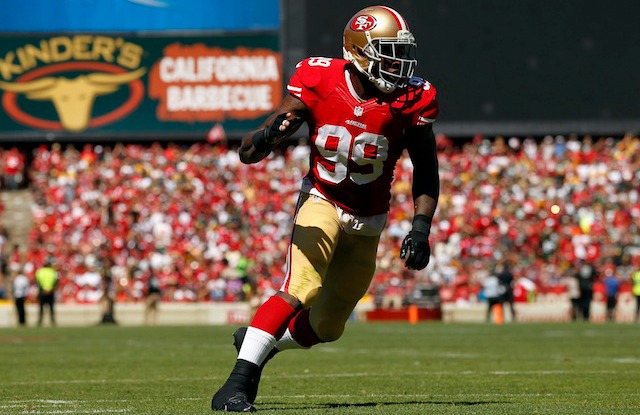 There was no doubt that the Dallas Cowboys needed to upgrade their defensive front after losing key players such as Robert Quinn and Maliek Collins to free agency. They shocked the world when they signed former All-Pro Aldon Smith back in April in an attempt to somewhat offset those departures and give another former All-Pro, DeMarcus Lawrence, some much-needed support coming off of the opposite edge.

Smith has been working with Jay Glazer of FOX Sports on not only building up his body for his return to NFL action for the first time in five years but also his emotional and inner strength. Glazer also runs an MVP foundation to help veterans get back into society. In his recent mailbag with The Athletic, he touched on it when asked if he thought Smith could contribute immediately to the Cowboys defense.

“I do, and I know firsthand how strong he is,” Glazer said. “We got Smith up to 287 pounds. He’s so incredibly strong, and the best part is he’s a lot stronger behind his rib cage. We helped him build himself up from the inside out. We didn’t just want to make him physically stronger and faster. We really wanted to build up his emotional and inner strength. He’s vulnerable now. Vulnerability is real strength — not muscles but vulnerability. He has a new purpose in life. He wants to use his experiences to help others, so he has a different motivation. He came to two different MVPs in the last week to tell all of our combat veterans he was reinstated. He wanted to share it with them and thank them and tell everyone how grateful he is.”

Smith has also seemed very humbled thankful for his new opportunity to play football again and inspire others.

“Gratitude is a big thing, folks. Do not take it lightly,” said Glazer. “For Smith to come on and continue to tell everyone how grateful he is empowered a bunch of combat vets who really needed it going into Memorial Day. I think Smith is a lot happier on the inside, which allows him to do his job better. On the outside, I’ve trained over 1,200 pro athletes in my MMA program. Smith is probably in the top five as far as guys who have put their hands on me. He’s had four years off so you can look at that as he’ll be rusty or you can look at that and say his body has been saved from four years of impact. I am really excited to see what he can do with the Cowboys. Nothing would make me happier than to go down to Orlando to the Pro Bowl with him in January. That would be quite the feat. By the way, Smith is a beautiful soul. When he got his contract with the Cowboys, he called me and asked me if he could sign it at my house, asking if my son was there. He wanted to sign it in front of my son so my son could understand what his dad helped make happen. That’s pretty damn special and beautiful for a guy to do that and to think about my son. That’s gratitude back. That’s beauty. If I’m an offensive lineman, I wouldn’t want Smith putting his hands on me this year, nope. But regardless of what he does on a football field, he’s already had an amazing journey back.”

Athletes usually don’t get another chance to redeem themselves after a five-year hiatus. Now with a clear mind and revamped physique, Smith will get his shot to rejuvenate his NFL career.