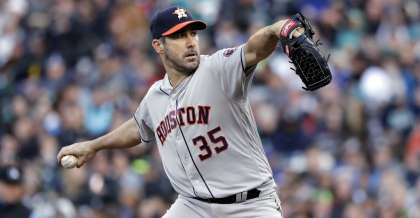 Houston Astros starting pitcher Justin Verlander added another memorable moment to his career as he tossed the third no-hitter of his career yesterday afternoon against the Toronto Blue Jays.

He is the first pitcher ever to throw two no-hitters in the same road stadium (Rogers Centre), per MLB Stats.

.@JustinVerlander is the first pitcher ever to throw TWO no-hitters in the same road stadium (Rogers Centre). pic.twitter.com/9Iqw2hSOzx

Verlander made more history as he is the sixth pitcher with at least three career no-hitters, per Sarah Langs of MLB.com.

Justin Verlander is the 6th pitcher with at least 3 career no-hitters.

He’s the third player in MLB history with two no-hitters against the same opponent (Tim Lincecum vs. the San Diego Padres; Addie Joss vs. the Chicago White Sox), per Stats By Stats.

Justin Verlander pitched his second no-hitter in Toronto, becoming the 3rd player in MLB history with 2 no-hitters against an opponent (Tim Lincecum vs. SD; Addie Joss vs. CWS).

Verlander is the first player in MLB history with 2 no-hitters at a visiting ballpark.@astros

Verlander struck out 14 batters and issued just one free pass while throwing 120 pitches to complete the spectacular feat.

The incredible part was his 120th pitch was at 97 mph.

The ability to maintain his velocity from the first pitch until the last pitch is something that makes the right-hander a rare breed.

Snell threw a bullpen session of 15 pitches a couple of days ago and said he that he felt “really good” after throwing fastballs and mixing in some throws with a changeup grip, per Juan Toribio of MLB.com.

#Rays Blake Snell said he felt “really good” after his first bullpen session and wants to return sooner than you probably expect: https://t.co/bvDQXl3v8g

Snell is recovering from arthroscopic surgery to remove loose bodies in his left arm and is set to have another bullpen session before throwing live batting practice.

He’s planning on returning Sept. 13 when the Rays will be facing the Los Angeles Angels.

Snell expects to throw around three innings and have a pitch count once he returns.

Snell has struggled to find his Cy Young form from last season but was throwing the ball exceptionally well in four outings (22 innings pitched) before having the surgery, as indicated by him authoring a 1.64 ERA and holding teams to a .184 batting average.

The Rays are fighting for a spot in the postseason, they currently occupy the top spot in the American League Wild Card standings.

The addition of Snell would be a significant boost to the Rays’ pitching staff.

The Los Angeles Dodgers have placed infielder Max Muncy on the injured list with a fractured wrist, per a team announcement.

The fracture is small, and Muncy believes he can return in two weeks, per Bill Plunkett of the Orange County Register.

MRI on Max Muncy’s wrist this morning revealed a small fracture. “Its average news. It’s not good news or bad news,” he said. Optimistic that he can return in 2 weeks. Adamant that he will be back for playoffs #Dodgers

The loss of a hitter like Muncy would be a significant blow to a typical team fighting for a playoff spot at this juncture of the season.

However, the Dodgers are anything but typical as they have an enormous lead in the National League West and aspire of returning back to the World Series.

The key for the Dodgers is ensuring that Muncy is healthy when the playoffs begin.

New York Yankees starting pitcher CC Sabathia was forced to leave his last start early a couple of days ago against the Oakland Athletics due to an issue with his right knee.

The Yankees placed him on the injured list Saturday.

Prior to today's game, the Yankees placed LHP CC Sabathia on the 10-day IL with right knee inflammation and recalled RHP Jonathan Loaisiga (#43) from @swbrailriders.

Sabathia mentioned to reporters that his pain level was at “a 10” during his last inning, per Mark Feinsand of MLB.com.

Even with his pain level at what he called “a 10,” Sabathia retired Semien, Chapman and Olson in order in the third. Judge: “They wanted to take him out after the first inning and he said, ‘No, I'm not going to do that. … That was pretty impressive."

Sabathia who has been on the injured list several times this season is hopeful to pitch again this season.