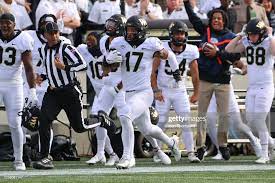 As we all gather around our Thanksgiving tables tomorrow, we’ll have the opportunity to reflect upon what we’re most thankful for: good health, being with family, and, of course, the 2021 Wake Forest football team and community of fans.

The Duke game was nearly sold out and a big reason was because of these local Winston-Salem fans who love their Demon Deacons. The NC State game was even closer to full capacity. The stadium vibe has never been better. Thank you, all of you out there rooting for Wake Forest this season.

There are plenty of other Wake Forest football season things to be grateful for. At the top of that list has to be the music track guy who puts on the tunes on the Truist Field Jumbotron while refs go under the hood to decide if the player caught the ball or not and during TV commercials.

Midway through the fourth quarter as Wake continued to dominate Duke, this tuned in tune person fired up “Sweet Caroline” It was the perfect time to get the fans, including me, dancing in the stands. The tune person also cranked out Bon Jovi’s “Livin’ on a Prayer” during the NC State game that inspired the crowd to sing all the words as we thought about how this entire season has been about ‘livin’ on a prayer.’

We also need to thank the offensive lineman for Syracuse who jumped early when the Orangemen were going for the two-point conversion to win the game against Wake. Had that guy not jumped, Syracuse would have scored two and won. But instead, the penalty moved the home team back five yards and they decided to kick a one-point extra point for the tie in regulation.

In that same game, we have to thank A.T. Perry, who snagged a 22-yard acrobatic catch from Sammy Hartman to win that game. The pressure throughout that game – with Wake Forest losing most of the contest – was so intense and difficult to cope with that we have thanked A.T. for holding on to that ball and ending one of the biggest stress tests any of us have ever experienced.

We then have to thank Traveon Redd. With Wake Forest and Army trading touchdowns for three quarters, Redd broke that mojo with an interception on a fake field goal and took it back 83 yards for a touchdown that gave Wake a two-touchdown lead and propelled them to the 70 to 56 victory. You saved us that day, Traveon, and we’ll be grateful to you forever.

In that same game, we saw somebody else who deserves our thanks. That somebody was Sammy Hartman who in that game fired passes for touchdowns at a rate and for distances that none of us had ever seen before. He chucked it for 458 yards and five touchdowns and those stats don’t even begin to explain how great he played that day. We were all thankful to escape from Army with the win and it would not have happened had Sammy not been Super Sammy.

We also have to be thankful to the entire Bojangles corporate enterprise. At tailgate after tailgate that fast food powerhouse fortified us with crispy fried chicken breasts. To have the energy at high octane levels, we needed to have our proteins and Bojangles got us that chicken several hours before kickoff so we could dance in the stands. Thank you, Bojangles.

We also should be grateful for the Wake Forest marching band that cranked out tunes before games in front of Truist Field. And we should be thankful for the Wake Forest clothing tent that sold winter hats, scarves, and blankets – all adorned with Wake Forest logos – during the Duke game that got frigid. And we need to thank the concession stand menu director for continuing to sell nacho chips with cheese. Thank you for sticking with what works.

We also need to single out one person for a huge thank you. You may not recognize his name but you’ve enjoyed what he produces. His name is Warren Ruggerio, the offensive coordinator for Wake Forest who thinks up all the delayed RPO (run-pass option) mesh concocted plays that have been baffling teams all season long.

Warren has some secret sauce in this delayed mesh RPO. His clever offensive schemes have catapulted the Deacs to one of the most prolific offenses in the United States. We can credit him for making Wake Forest football more exciting to watch than ever with long bombs for touchdowns a regular thing.

And last we need to be thankful for the entire Wake Forest football team that as we gather around for Thanksgiving our team is still in the hunt to win the ACC championship and go to a big bowl game. So late in the regular season, the games still matter. That’s sweet.

This is the happiest of Thanksgivings because of what you’ve done for us.