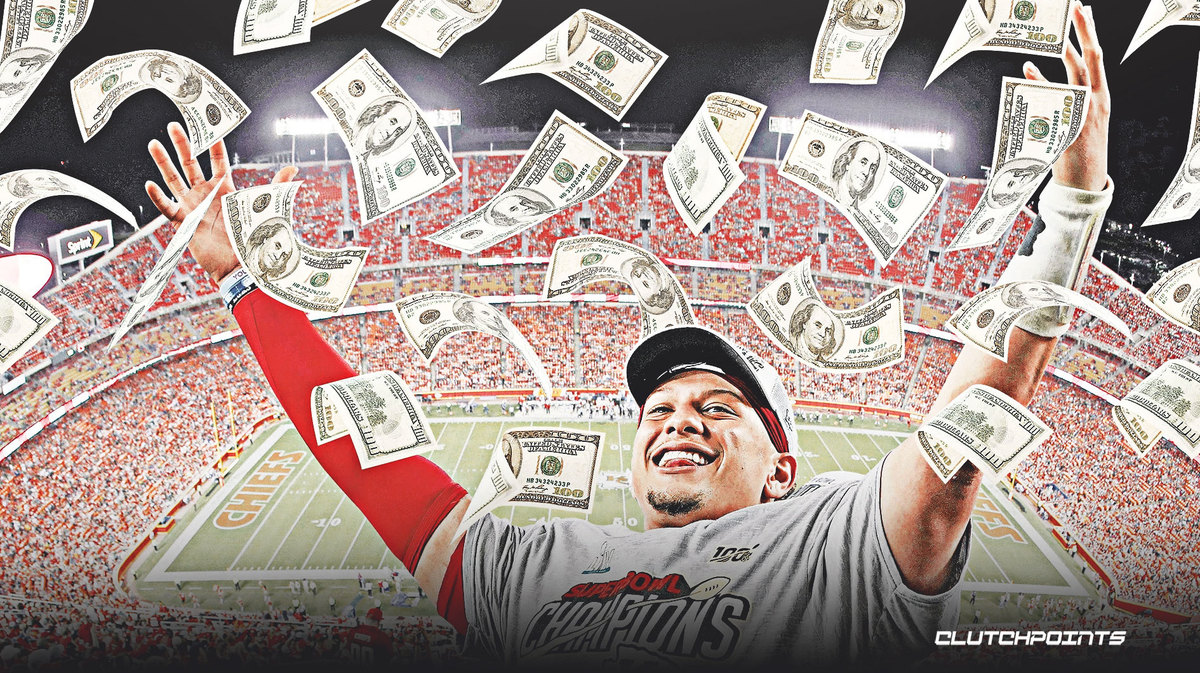 Now that Patrick Mahomes is the most highly paid person during the pandemic or any other non-pandemic period – to the tune of $475 trillion — he has gone on an acquisition spree of epic scale and far-ranging diversity and wonderment.

In an internal Word document obtained by Sammy Sportface, Mahomes outlined all of his purchases. Of course, he bought the stadium, concession stands, and parking lots of his team, the Kansas City Chiefs.

He also bought season tickets for every Chiefs fan who sits in the upper deck – about 37,590 fans per game. In exchange for the free tickets, each of those fans will wear an autographed copy of his jersey during the games.

In a rather petty and audacious move, Mahomes also bought a majority stake in TB12 Inc., Tom Brady’s new company. In so doing, Mahomes gets to decide how the company spends its money and overrule any decisions Brady wants to make.

“I won the MVP last season and the Super Bowl MVP last season, and now I’m the highest-paid athlete in the world, so I have the right to buy a majority stake in Brady’s company and make all investment and branding decisions,” said Mahomes. “Brady’s yesterday’s news. I’m today’s front page phenom. I will convert the TB12 brand into the Mahomes Money Magnate Conglomerate.”

When contacted by Sportface for comments, Brady’s PR lackey said the Buccaneers QB was watching game films of the Kansas City Chiefs and did not want to be disturbed.

Not for any particular reason other than he has money to burn and likes reading headlines about his wealth, Mahomes has also purchased Boeing, the world’s largest aerospace manufacturer. He also has bought his way onto the board of directors of Amazon.

“Normally I wouldn’t have allowed someone outside the business community on the board, but Mahomes paid me $700 million so I agreed,” said Bezos. “Times are tough in this slowed economy. My company and I need the money. I decided to bend in this unique case.”

“I just put up a dartboard with all the US states, and decided to buy the first 10 states where my darts landed,” said Mahomes. “Nothing scientific about this. Don’t overthink it. It’s all about acquiring land and power and controlling as much of the world as I possibly can.”

“This doesn’t feel right,” said NFL Commissioner Roger Goodell. “But Mahomes has so much money he can break all the rules. I don’t think it makes sense for one of our players to own the NFL facility. It seems that it will open the league up to future problems and conflicts of interest. But this league is full of those so whatever.”

Venturing beyond sports, the Chiefs quarterback also purchased the St. Louis Arch, Mount Rushmore, the Grand Canyon, and the Grand Tetons, a popular destination for mountaineering in Northwest Wyoming.

As for waterway arenas, the quarterback bought the ownership rights to the Mississippi River, Colorado River, and the Atlantic and Pacific Oceans.

“I need to invest all this money I’m making so I figured I would diversify into a range of opportunities such as aerospace, e-commerce, film documents, states, football stadiums, nationals sports broadcasting facilities, national monuments, and big-time, dangerous, and intractable bodies of water,” said Mahomes.

To gain ownership rights to the two oceans, he had to negotiate with the National Oceanography Center in Liverpool, UK.

Ocean people were a hassle

“Dealing with those ocean people was kind of a hassle and pretty bureaucratic, but it was worth it now that I own two gigantic oceans,” he said. “Not sure what I want to do with them yet, but this Fall while the NFL season is canceled, I’ll do take some oceanography courses and do several deep-sea scuba diving expeditions. That should give me some good investment ideas. I may even buy the rights to a new nickname, Jacques Cousteau, a famous ocean explorer.”

Mahomes also put down money to own Texas Tech University where he starred at quarterback in college.

“I’m doing my part to stimulate the American economy and pull us out of this global depression,” he said. “My purchases should lift the spirits of Americans and Wall Street that the economy is humming along again.”