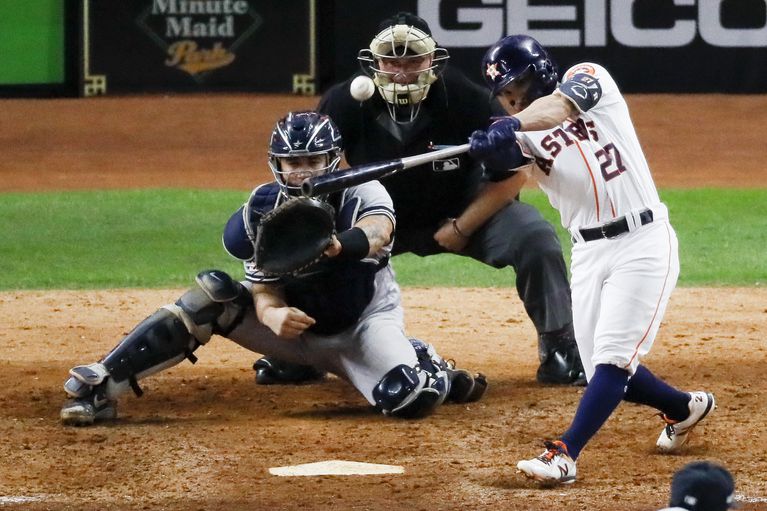 The Houston Astros are headed back to their second World Series in three years as they defeated the New York Yankees by a score of 6-4 in Game 6 of the American League Championship Series Saturday night.

The primary reason for the Astros returning to the Fall Classic is due to the heroics of their second baseman Jose Altuve.

ALTUVE SENDS THE @ASTROS TO THE #WORLDSERIES! pic.twitter.com/NYx1yzRFDY

The small infielder was selected as the ALCS MVP, per MLB.

No doubt about it.

Altuve winning the MVP was logical as he was the best player for the Astros during the series, by compiling a .348 batting average and two home runs, including the walk-off during the six games.

Altuve made some history with the home run, as he joined Bill Mazeroski (Game 7 of the 1960 World Series) as the only players to hit a walk-off home run to end a postseason series after their team had blown the lead in the same inning, per MLB Stats.

From @jaysonst: José Altuve joins Bill Mazeroski (Game 7 of the 1960 WS) as the only players to hit a walk-off HR to end a postseason series after their team had blown the lead in the same inning.

Both came against the Yankees. pic.twitter.com/Uy4pe2usId

He’s also the first second baseman ever to win both a regular-season MVP and a postseason-round MVP in his career, per Sarah Langs of MLB.com.

José Altuve is the first second baseman ever to win both a regular-season MVP and a postseason-round MVP in his career.

Altuve is a great player and got to share a special moment with his daughter at the end of the game, per Jeff Passan of ESPN.

Jose Altuve the moment he saw his daughter is just too much. pic.twitter.com/mqq3L4xEEF

The Astros will now focus on their opponents for the World Series in the Washington Nationals. The Nats boast a formidable starting rotation and have a solid lineup.

The Los Angeles Angels have hired Joe Maddon to be their new manager, per a team announcement.

The terms of the contract will be about three years, and he’ll earn between $12-$15 million, per Jesse Rogers of ESPN.

Joe Maddon deal with Angels likely to be for 3 years. In the 12-15 mil range.

Maddon was the favorite to become the next manager of the Angels when they interviewed him last week.

The interesting aspect is that former manager Buck Showalter was the runner-up for the job, per Bob Nightengale of USA Today.

Joe Maddon’s 3-year deal with the #Angels is nearly finalized, as @JonHeyman and @ESPNChiCubs reported, and will be announced before the World Series. Buck Showalter was runner-up

Before helping those two clubs achieve success, he spent 30 years in the Angels organization in several roles, including two stints as interim manager in 1996 and 1999.

Maddon faces a tough task trying to turn the Angels around as they have four straight losing seasons and haven’t made the postseason since 2014.

He’s the right person for the job, as indicated by him leading all MLB managers in regular-season wins with 917 and postseason appearances with seven from 2010-19, per MLB Stats.

The surgeon removed three fragmented loose bodies and cleaned up multiple bone spurs from his elbow during the operation.

The first baseman played through the injury during the playoffs, and it had an impact as he posted a .200 average and .673 OPS with one home run in five games against the St. Louis Cardinals during the National League Division Series.

The Braves will need Freeman healthy to win the NL East division next season.