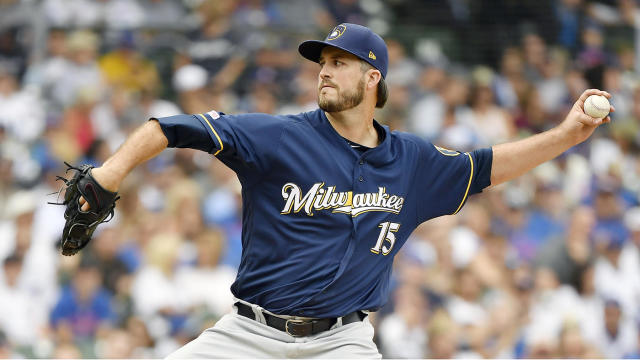 The previous week in MLB was about a team in the National League signing a pitcher to a multi-year deal, starting pitcher signs a contract with an American League club, and an NL team hire a manager.

The San Diego Padres have agreed to a deal with free-agent pitcher Drew Pomeranz, per an announcement by the team.

The #Padres have signed LHP Drew Pomeranz to a four-year contract: https://t.co/WuKCRWzwSs pic.twitter.com/TiQLTGDZo2

The contract is worth $34 million over four years, which includes an $8-million signing bonus, per Joel Sherman of the New York Post.

However, the left-hander flipped the script pitching out of the bullpen for the Brewers.

Pomeranz was a member of the Padres’ roster in 2016 before being traded to the Boston Red Sox.

The addition of Pomeranz was a smart move by the Padres, as he was terrific last year pitching out of the bullpen.

The bullpen for the Padres was a strength during the 2019 campaign, and Pomeranz provides more depth.

The Texas Rangers have signed starting pitcher Kyle Gibson to a three-year, $30 million contract, per Jeff Passan of ESPN.

Right-hander Kyle Gibson and the Texas Rangers are in agreement on a three-year, $30 million deal, sources tell ESPN.

It’s the first move in what’s expected to be a very busy winter for the Rangers as they head into their new stadium. They need pitching. Gibson is first step.

A silver lining last year is the right-hander had eight starts in which he pitched at least six innings and allowed three runs or less.

The potential is there for Gibson to be a reliable third starting pitcher in a starting rotation, and this is what the Rangers are seeking.

They already have Mike Minor and Lance Lynn anchoring the staff, and, hopefully, Gibson gives them a solid trio in the rotation.

The Rangers will face an uphill battle challenging for a division title, but it wouldn’t be shocking if they’re in the mix for one of the two MLB American League Wild Card spots if the rotation performs well.

The Pittsburgh Pirates announced several days ago they have hired Derek Shelton as their manager.

The Pirates have hired Derek Shelton as our 41st Manager of the organization.

Shelton has 15 years of coaching experience and spent the last two seasons as the bench coach of the Minnesota Twins. pic.twitter.com/nbm6Es4Qoc

Shelton becomes the 41st manager in the club’s history.

He replaces Clint Hurdle, who was fired in September after having a bad 2019 season in which there were issues on and off the field.

Shelton spent the past two years as the bench coach of the Minnesota Twins and has 15 years of coaching experience.

The hiring of Shelton was a step in the right direction as he’s expected to provide stability in the clubhouse.

The Pirates may struggle during the 2020 season as they might deal their best players to acquire young talent.

Stay tuned next week for more from MLB.