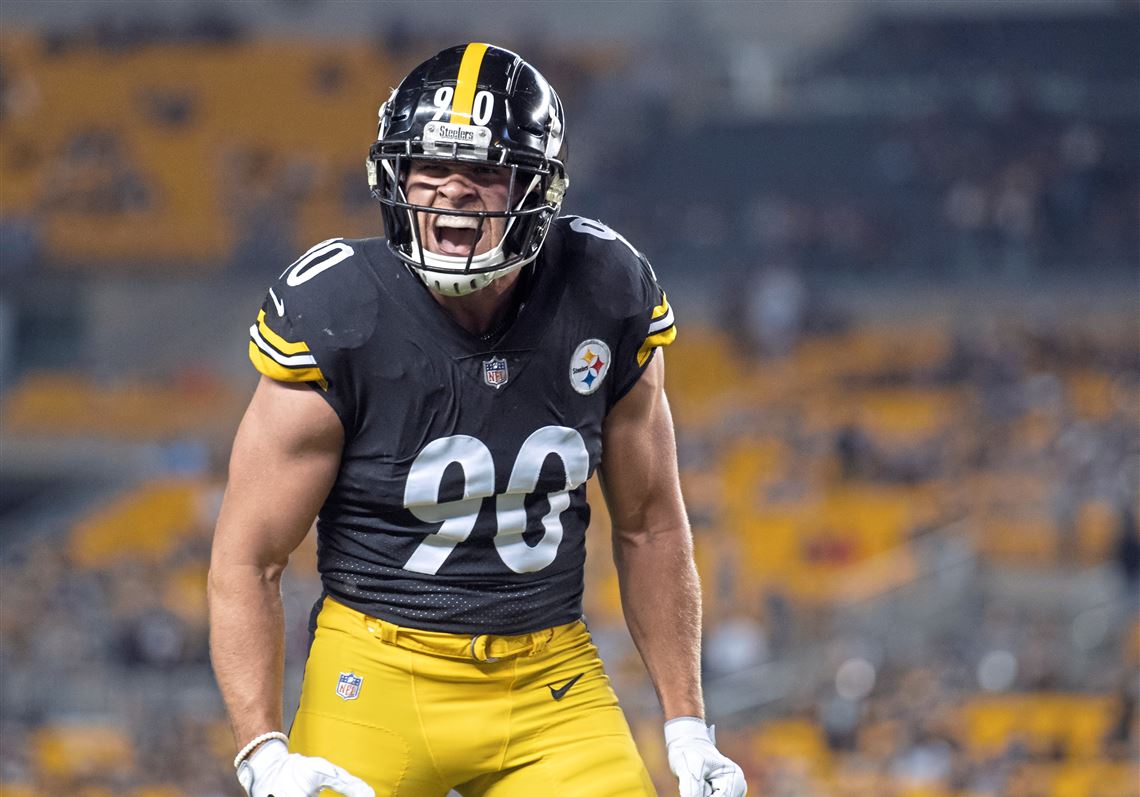 Steelers defense looking for a little payback vs Browns

When mentioning the word “rivals” the Cleveland Browns have been pretty far down the list since the mid-90’s.

Yes, there is no love lost between Pittsburgh and Cleveland, but it’s kind of hard to call someone a rival when you thump your opponent over, and over, and over again. Since 1999, the Steelers are 34-7-1 vs the Browns.

The bug does not have a rivalry with the windshield… and the Steelers, like the windshield, always wins when it comes to the Browns.

On November 14th, the bug finally put a crack in the windshield, as the Browns defeated the Steelers 21-7. All it took for the Browns was the Steelers to be minus Ben Roethlisberger, Stephen Tuitt, and Benny Snell. Lost during the game was Juju Smith-Shuster and Diontae Johnson to head hunting hits by the Browns defense. James Conner re-injured his shoulder within a few series. Oh, and Mason Rudolph has his worst game of his career, tossing four interceptions.

Yet, there were the Steelers, only down a score for much of the 2nd half.

Their resiliency has been amazing, to say the least.

Oh, and lest we forget the whole Myles Garrett vs Rudolph incident at the end of the game.

Last week vs Cincinnati, Rudolph continued to struggle, which prompted Steelers head coach Mike Tomlin to bench Rudolph, and insert Devlin Hodges into the game. As he did during his appearances against the Ravens and Chargers, Hodges seemed poised in the pocket, doing just enough to give the team a chance to win.

He had the Ravens beat if it weren’t for a fumble by Smith-Schuster in OT. The Steelers were just a few yards away from Chris Boswell’s range and a rousing win. He outplayed future HOF QB Phillip Rivers on the road in LA.

Last week, in the first series he entered the game, he zipped a ball 40 yards downfield to James Washington who took the ball in stride, and rumbled into the end-zone after punking a Bengals defender.

Now Hodges has a chance to add to his lore, as the Steelers have a huge chance to exact some revenge against Cleveland, whom if they beat, will have their playoff hopes on the intersection of slim and none.

One thing is for sure, you can expect a physical, hard hitting affair when these two teams hook up Sunday afternoon at Heinz Field.

Just don’t look for any dirty tactics by Pittsburgh.

“We’re never the initiators of that,” said Steelers guard Ramon Foster, of tempers flaring. “Look back and see, I don’t think so. People always want to get their rocks off against us. For whatever reason if that’s how they feel, so be it. We’re not going to be the idiots getting penalties this weekend, I know that for sure.”

The crowd will be loud and boisterous, and the defense will be hungry to appease them, but they will do it the right way.

“We’re all professionals. We know how to carry ourselves. We’re grown men,” Steelers safety Minkah Fitzpatrick said. “We’re going to put emotions aside, hard feelings aside, everything else aside. It might put a little more fuel in the fire, obviously, but I don’t think there’ll be any unnecessary actions like there were the first game.”

Do look for the Steelers to jump start the rushing attack behind the capable legs of Benny Snell.

Snell ran for a career high 98 yards last week vs Cincinnati. Now he is hungry for more.

“His spark (was) just in his run demeanor,” Fichtner said. “The idea of coming back from injury and not blinking from the first time he stepped on the practice field through the game. Man, he ran with strength. He ran with power. I think he’ll feel better in time.”

Also look for Jaylen Samuels, Trey Edmunds, and Kerrith Whyte to see carries at various series in the game.

“We were going to try and share as many reps as possible because you didn’t want to overload him,” Fichtner said about Snell. “I think the situation kind of called, and he kept begging. When he’s begging, you feel good. … There’s a confidence level there that he shared with us.”

Snell is welcoming as many carries as he can get, as he feels stronger as the game goes deeper into the clock.

“I feel like that is one of my best attributes,” Snell said. “I feel like I get better as the game goes on.”

The offensive line has Snell’s back, and they are excited to provide Snell with a few holes to burst through, and take advantage of a poor Browns run defense.

“I love his tenacity,” Foster said. “It’s pretty cool. It’s refreshing. I told him at practice that I love what you do. In the sense of a young guy, when he runs, good or bad, he’s jaw-jacking a little bit. Nothing malicious. It’s cool to see him excited to play football in this day and age when people are trying to attack the game in negative ways. He’s the way that I remember it in the sense that he’s gritty. I love it.”

It is supposed to be a rainy morning leading up to kickoff at 1:00 p.m. at Heinz Field. Those conditions should point the Steelers in the direction of playing physical, run first offense, a staple of Steelers football history.

Devlin Hodges will be looking to remain poised and confident while manning the passing attack. His biggest job will be not turning the ball over.

“It just goes back to being prepared, taking what the defense gives you,” Hodges said after practice Wednesday. “Our ‘D’ is playing really good right now, so just not turning the ball over is (the goal). We want to go and score every drive, but at the same time, it’s about taking care of the ball and doing what it takes to win.”

Hodges knows not many football experts give him a chance to be successful in this league.

“I don’t have anything to lose,” Hodges said. “I was undrafted.”

He’s heard it all before.

“I won’t change who I am,” Hodges said. “I go out there and have fun, compete, play hard and try to do whatever it takes to win each and every week. I won’t look ahead. I’m just looking forward to this week and playing the Browns.”

One thing is for sure… the offense, from the lineman to the coaches are confident in Hodges abilities, no matter what the so-called experts say.

Now all he has to do is lead the Steelers to a huge victory, solidifying their hold on the #6 seed in the AFC, and likely knocking the Browns out of playoff contention.

Mike Tomlin is asking for just one thing from Hodges…

“There’s going to be enough pressure on Devlin in just performing so I’m not going to add to it by talking about expectations,” Tomlin said. “I expect him to not kill us.”

Even with the Steelers missing several key players, when it comes to the Browns… well, remember the scene in Full Metal Jacket, when Gunnery Sgt. Hartman asks Private Joker if he has a ‘war face’, and Joker screams out loud, but Sgt. Hartman is hardly impressed saying, “You don’t scare me! Work on it!”?

That’s the Browns to me, they just don’t scare me, so they are just going to have to prove it to me.

I see a very motivated Steelers defense coming out in this game and laying some hard hits to set the tone. I like Hodges to manage the game taking what the Browns are giving, while Snell and the offensive line take control of the trenches.

It won’t be pretty, but “Steelers Football” rarely is. There will be no Cleveland sweep for the first time since 1988. There will be one team moving forward, and one team planning on next year at the end of this one.

The Steelers hold on and put the Browns out to pasture.

The former Samford quarterback showed no fear when he was forced into action vs the Ravens, Chargers, and Bengals. When he is in, he just goes with the flow.

Yes, this is Rudolph’s first season being a starter with Big Ben out, but he has not grabbed the job by the reigns. Lack of confidence and bad pocket presence has hampered his game significantly.

Down year after a Pro Bowl season. On the sidelines with injuries way too much.

Smith-Schuster has struggled this season without Roethlisberger at the helm.

He was ready to have a breakout season and establish himself as a big-time playmaker in the NFL. Has shown signs of life the past few weeks.

Steelers deep threat, but has only one catch.

The Vanimal, when unleashed, is a sight to see. Unfortunately, he has not played up to expectations this season.

Majorly underachieving in his sophomore season. Provides more turnovers than a bakery, but has picked it up the last three weeks.

Browns offensive MVP… gets the tough yards and is excellent catching passes out of the backfield.

Not living up to the hype he should be providing.

Leads the team in receptions and touchdown catches.

The Browns have some talent, but it has been up and down. They are allowing 24.6 points per game and can be had on the ground, as they give up over 134 yards per game. Good pass rush, generating 26 sacks on the year so far.