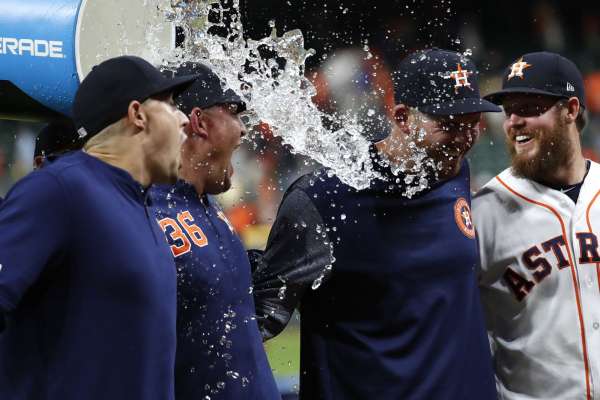 The last week in MLB was about a team in the American League making history, a starting pitcher in the National League reaches a significant milestone, and a division leader places a key player on the injured list.

The Houston Astros had a very memorable game on Saturday night against the Seattle Mariners, as four pitchers tossed the 14th combined no-hitter in MLB history, per Yahoo Sports MLB.

Aaron Sanchez blanked the Mariners for six innings, then relievers Will Harris, Joe Biagini, and Chris Devenski finished off the last three frames.

This was extremely special as it was the first start for Sanchez with the Astros, who was acquired at the trade deadline.

The right-hander made history, as he became the first pitcher to toss six-plus innings and not allow a hit in a debut following a midseason trade since Greg Maddux achieved the feat with the Los Angeles Dodgers on Aug. 3, 2006, per Stats by STATS.

In his @astros debut, Aaron Sanchez threw 6.0 innings without allowing a hit before being removed from the game.

He's the 1st pitcher to throw 6.0+ innings and not allow a hit in his debut with a team after a midseason trade since Greg Maddux did so for the Dodgers on 8/3/2006.

Sanchez is just the second pitcher ever (Mark Langston, 1990) to be part of a combined no-hitter in his first start with a team, per MLB Stats.

Aaron Sanchez is just the 2nd pitcher ever (Mark Langston, 1990) to be part of a combined no-hitter in his 1st start with a team.

This was the 12th no-hitter in Astros history and the first since Mike Fiers fired a no-hitter against the Los Angeles Dodgers in 2015, per Brian McTaggart of MLB.com.

The no-hitter was the 12th in Astros history and first since Mike Fiers no-hit the Dodgers in 2015. It was the club’s second combined no-hitter. The other came on June 11, 2003 when Roy Oswalt, Pete Muro, Kirk Saarloos, Brad Lidge, Octavio Dotel and Billy Wagner did it at NYY.

The Mariners have been victims of a combined no-hitter twice this season, as the Los Angeles Angels did it to them in July.

They’re the 14th team to get no-hit twice in the same year since the Dodgers and New York Mets in 2015, per Greg Johns of MLB.com.

Mariners are 14th team in MLB to be no-hit twice in same season. No team has been no-hit 3 times.

The @astros have pulled off the combined no-hitter vs the Mariners.

Mariners have been on the losing end of two combined no-hitter this season and both have been by at least 9 runs.

The largest losses in any combined no-hitters ever. pic.twitter.com/Fs8XRyj6BT

However, he appears to be a much different pitcher with the Astros, and that’s a scary proposition for other teams in the American League.

2,397 Ks. @ClaytonKersh22 moves ahead of Sandy Koufax for third all-time in franchise history with his 2,397th career strikeout. pic.twitter.com/oOmDiVE9Ng

In his start last Thursday against the San Diego Padres, he passed Dodgers legend Sandy Koufax for third on the team’s all-time strikeout list with 2,397 strikeouts.

Koufax, who was enshrined in Cooperstown in 1972 was an exceptional pitcher and had a fantastic career with the Dodgers, especially the last five seasons.

Kershaw has had a Hall-of-Fame career, considering the left-hander has won multiple Cy Young Awards, won an MVP, and led the NL in wins and ERA numerous times.

Kershaw has a terrific chance to be the Dodgers’ all-time leader in strikeouts, providing he can stay healthy.

The New York Yankees have been dealt another significant loss as they placed first baseman/designated hitter Edwin Encarnacion on the injured list Saturday with a fractured wrist.

Prior to game 2 of today’s doubleheader, the Yankees placed 1B/DH Edwin Encarnación on the 10-day IL with a right wrist fracture and recalled 1B Mike Ford (#74) from @swbrailriders.

He was hit by a pitch on the wrist during Game 1 of Saturday’s doubleheader against the Boston Red Sox.

Encarnacion hopes to be back within three weeks but was told his wrist will take between three to five weeks to heal, per Bryan Hoch of MLB.com.

Edwin Encarnacion said he hopes to be back in three weeks. He said that he was told it will take 3-5 weeks.

The team will miss Encarnacion while on the IL, as the veteran has been a source of power in their lineup.

The Yankees have placed several key players on the IL in 2019 but have managed to overcome adversity.

The club has been remarkably resilient, as the injuries haven’t impacted their performance on the baseball diamond, considering they’re one of two teams in the AL with at least 70 wins.