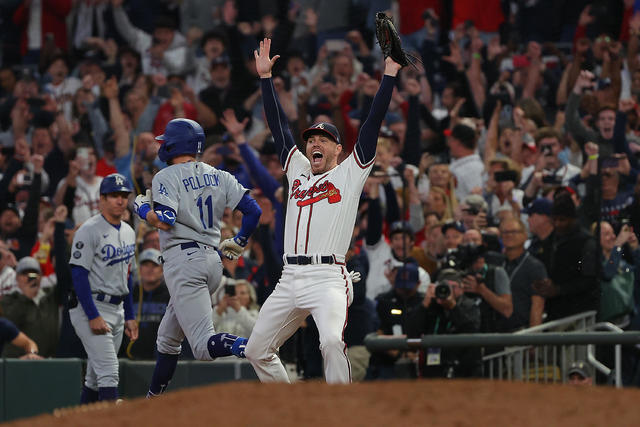 The prior week in MLB was about a pair of teams advancing to the World Series, and a team in the National League is expected to name a new manager.

ATLANTA IS GOING TO THE WORLD SERIES ‼️

The Atlanta Braves emerged victorious in their National League Championship Series against the Los Angeles Dodgers.

They won the series in six games and have advanced to the World Series for the first time since 1999.

The @Braves are headed to the World Series for the first time since 1999! #ForTheA pic.twitter.com/7uop3Pbzdh

The Houston Astros will oppose the Braves in the World Series.

The series will start tomorrow at Minute Maid Park, and the Astros will have home-field advantage after finishing the regular season with 95 wins compared to the Braves winning 88 games.

The Braves are the fourth team in MLB history to reach the World Series after having a losing record at the All-Star break, per ESPN Stats & Info.

The Braves reach the World Series for the 1st time since 1999.

They are the 4th team ever to reach the World Series after having a losing record at the All-Star break (1st since 1991 Braves). pic.twitter.com/aBtpSXKyvN

The Braves endured injuries to key players, such as outfielder Ronald Acuna Jr. and starting pitcher Mike Soroka during the regular season.

The Braves had key contributions from several players in the NLCS against the Dodgers.

However, it was outfielder Eddie Rosario who stood out.

The 14 hits by Rosario in the series tied the MLB record for hits in a single playoff series, per MLB Stats.

Eddie Rosario has tied the record for most hits (14) in a single #postseason series.

The last time the Braves won the World Series was in 1995 but have made the playoffs 16 times since then, which is an MLB record for consecutive playoff appearances without a title, per Sarah Langs of MLB.com.

A streak the Braves are trying to end here — clinching a WS berth is a good step!

Most consecutive postseason apps not leading to title:

The Braves face a tough challenge in the Fall Classic against a talented Astros team.

The @Astros have won the pennant! #CLINCHED pic.twitter.com/oO4CwbQ5I6

The Houston Astros are in a familiar position once again as they are back in the World Series.

They won the American League Championship Series in six games against the Boston Red Sox.

The Astros won the AL pennant for the third time in five years.

Houston is going to the World Series for the third time in five years. The last American League team to do that was the Yankees from 1999-2003.

Dusty Baker will manage his first World Series since 2002.

And the amazing Yordan Alvarez is ALCS MVP.

Astros’ outfielder Yordan Alvarez was selected as ALCS MVP, and he had a phenomenal series.

Alvarez posted a .522 average with five extra-base hits and six RBIs over the six games.

He compiled seven hits in the last two games, while the entire Red Sox team had five in that same period.

He is the first player ever to out-hit the entire opposing team over the final two games of any series in MLB postseason history, per ESPN Stats & Info.

Yordan Alvarez had 7 hits over the final 2 games of the ALCS.

The entire Red Sox team had 5.

He's the first human, ever, to out-hit the entire opposing team over the final 2 games of any series in MLB postseason history. pic.twitter.com/VHm0jWGugS

The entire Astros team was dominant in the last three games of the series as they outscored the Red Sox 23-3 over that stretch.

The Astros have a solid team, and it should be a terrific World Series between them and the Atlanta Braves.

The St. Louis Cardinals are set to announce Oliver Marmol as their new manager, per a report by Katie Woo and Ken Rosenthal of The Athletic.

Marmol, 35, will be the youngest manager in the Majors.

The Cardinals have a press conference scheduled for this morning, says Woo.

Marmol, 35, will be the youngest manager in the Majors. The Cardinals have a press conference set for 10 am Monday morning.

Marmol has been the Cardinals bench coach since the beginning of the 2019 season.

He has been with the organization since being selected in the sixth round of the 2007 MLB Draft.

Marmol will become the 65th manager in franchise history.