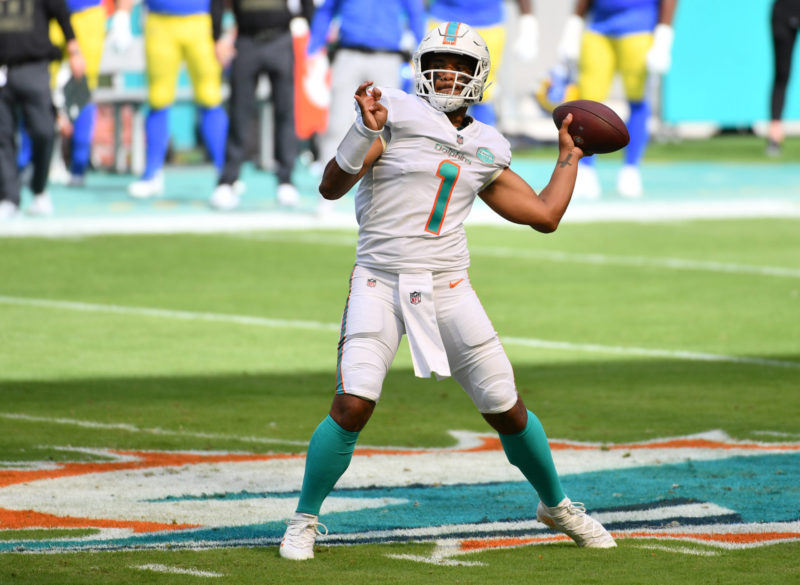 Tuanigamanuolepola “Tua” Tagovailoa. Let’s stick to the three-letter version instead of his given 18-letter first name. I believe we all can agree that it’s much easier to pronounce and spell.

Tua Mania is in full force in South Beach, my friends. Getting his debut NFL start as a rookie quarterback, Mr. Tagovailoa helped lead the Miami Dolphins to a 28-17 victory over the Los Angeles Rams on Sunday afternoon. In actuality, he didn’t necessarily impress, nor did he resemble what Miami should expect in the future from his “Rocket Mortgage” left arm.

Completing just 54.6-percent of his pigskin hurls in the contest, Tagovailoa delivered on 12-of-22 of his throws for a meager 93 yards and a touchdown strike.

The win produced mainly by Miami’s defense and special teams at Hard Rock Stadium in beautiful Miami Gardens, Florida, lifted the Fins to a 4-3 record in the AFC East. After three-straight checkmarks in the win column, Miami is firmly cemented behind the Buffalo Bills (6-2) for second place in the division. Goodbye, New England Patriots (2-5). Hello, Dolphins.

Listed at 6-foot-0 and 217 pounds from ‘Ewa Beach, Hawai’i, Tua was taken by the Fins at No. 5-overall in the 2020 NFL Draft. Tagovailoa, just a 22-year-old pup, acts and plays like a grown man. Leaving the Aloha State for the mainland to begin his collegiate career at the University of Alabama as a true freshman in 2017, Tua helped the Crimson Tide roll at just the right time. That right time happened to be the second half of the 2018 College Football Playoff National Championship versus their Southeastern Conference foe, Georgia Bulldogs.

Playing as a backup QB behind Bama sophomore, Jalen Hurts, the stellar lefty received plenty of playing time under head coach Nick Saban due to the fact that the Tide rolled-up huge leads in most of the victories in their 2017 campaign.

When Hurts wasn’t performing up to snuff throughout the first half of the 2018 CFP title game, insert Tua Tagovailoa for the second frame. Light the match, and Alabama’s offense had instant confidence and swagger. If Tua wasn’t slinging the pigskin all over the proverbial lot, he was making plays on the run with his sweetly-quick feet.

Mr. Tagovailoa ignited the Crimson Tide’s rally to force overtime against Georgia. In extra time after the Dawgs delivered a field goal to take a 23-20 advantage, it was Tua’s turn. Well, his 41-yard pitch-perfect, frozen rope of a pass found true freshman wide receiver DeVonta Smith on the far-left sideline for a trip to the heezy, and a 26-23 “W” to claim the national title.

To this day, Tua’s TD pass to Smith is the very-best toss I’ve ever seen a collegiate QB make in the clutch. It was an absolutely ludicrous pinpoint, dagger dime.

Check out this screaming fireball for yourself in this YouTube video. Not only that, watch Tua look-off the safety in the secondary prior to the dart. Goodness, gracious.

Although his first career NFL start wasn’t as flawless as his TD pass above, Tua Tagovailoa is primed to be the next franchise quarterback for the Miami Dolphins.

As a Texas A&M Aggies fan who followed the SEC during Tua’s time in Tuscaloosa, Alabama, I can tell you that this young man is a spirited warrior. Additionally, he has the arm talent and football IQ to win games in the NFL. I can’t wait to see him develop into an all-time Dolphin great.

That’s truly how high I believe Tua Tagovailoa’s ceiling goes. The 2018 Walter Camp Award and Maxwell Award winner from Bama is ready for his next chapter at the highest level. The Dolphins will head to the desert this coming Sunday to face Kyler Murray and the smokin’ hot Arizona Cardinals.

I’ll be watching with tremendous anticipation to see what this stud can deliver.