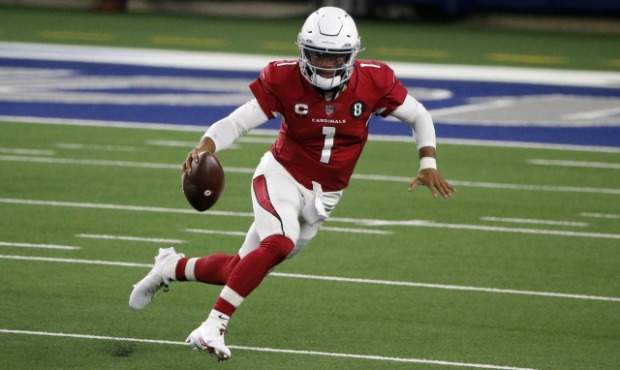 Electrifying. That’s the only word in the dictionary that describes Arizona Cardinals’ quarterback Kyler Cole Murray — he excites intensively and suddenly. Murray’s part Superman and part Flash rolled into one superhero. Does a cannon arm along with effortless speed and quickness do anything for you?

It certainly does for me, my friends.

Kyler Murray has 5 games with a Pass TD & Rush TD this season.

The most by any player through 6 games in NFL history pic.twitter.com/tiHPUg5NpU

Kyler Murray, the 23-year-old former Oklahoma Sooners’ legend from Bedford, TX, owns the ultimate collegiate hardware, taking home the 2018 Heisman Trophy back to Norman. Strike that pose, Kyler. The No. 1-overall pick in the 2019 NFL Draft showed his draft worthiness after winning 2019 NFL Rookie of the Year honors.

During the early portion of his 2020 NFL campaign, Murray continues to impress the masses in Cardinals’ head coach Kliff Kingsbury’s version of the Air Raid offense. With Kyler under center, you can call Arizona’s offense anything you’d like. Air raid, ground raid, or be very afraid.

Ultra-quick decision making has always been the key ingredient to successful NFL QB play. Kyler Murray only needs a millisecond of time from the snap of the football to decide what he’ll do. He’s either letting it fly or finding a running lane, folks.

Whether it’s spiraling a dart to fellow Cards’ wide receiver DeAndre Hopkins, Christian Kirk, or the ageless and loyal Larry Fitzgerald, Murray can make every throw without hesitation. Again, just like The Jackson 5, he makes it look as easy as ABC and 123.

When Mr. Murray’s running the rock, he’ll boggle your mind. That millisecond decision to pull the pigskin down on a passing play and take off with his fast-twitch legs makes him one of the most potently lethal players in the football universe.

Secondarily, he’s smart enough to avoid needless hits because he’s okay with sliding feet-first for a first down or scampering out of bounds.

Let’s not forget about his fiery competitiveness and marvelous personality. It’s impossible not to like this guy.

How about a quick high school flashback? Not just an incredible football player, Kyler Murray also happens to be a baseball stud. He’s a first-round MLB draft pick as well. This man can do it all.

When you think of the best high school football players of all time, there's one name that comes to mind in Texas.

The Legend of Kyler Murray, now on YouTube ⤵️

If you don’t agree with me that Kyler’s absolutely mystifying of the field, do me a favor. Tune-in to a Cardinals game before the season has reached its conclusion. He’ll dazzle you with his sickening all-around game.

On the ground, Murray leaves NFL defenders in a state of bewilderment. Extraordinary speed and quickness, elusiveness for days, and lateral moves that’ll make the very-best NFL defenses look blatantly foolish. Add his remarkable football IQ and preeminent overall intelligence, and this young pup leaves defenders shaken out of their cleats with smashed egos.

Strutting their stuff at 4-2 in Kyler Murray’s second season at the helm in Glendale, AZ, the Arizona Cardinals have what it takes to compete in the fully-loaded NFC West. With the defending NFC Champion San Francisco 49ers looking up after their 3-3 start, and the Los Angeles Rams (4-2) still trying to find their footing, Russell Wilson’s Seattle Seahawks are looking scary with a perfect 5-0 mark.

That being said, Kyler Murray has the Cards’ soaring towards a spot in the playoffs. If they can complete a push to the postseason behind Mr. Murray’s command, these Cardinals are flat-out dangerous, and a nightmare matchup for any team still standing in the NFC.