The NFL Could Use Colin Kaepernick Back in Uniform 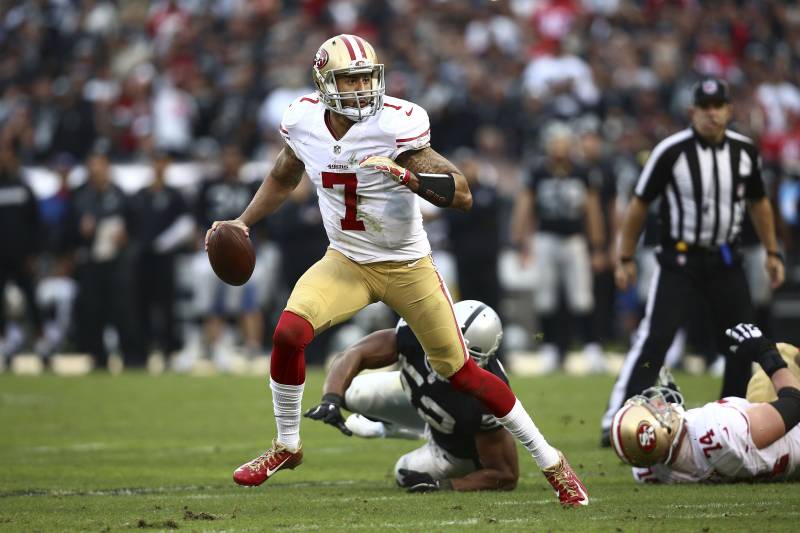 It’s been too long. I don’t know about you, but I want to see Colin Kaepernick kissing his bicep again after scoring a touchdown. A big smooch on that jacked bicep with his facemask. That’s just plain awesome.

Now that we’ve witnessed a response via protests against racial injustice for weeks, Colin’s thoughts and actions from the very beginning reverberate on another level. So far, the Los Angeles Chargers and Philadelphia Eagles seem to be all-in on bringing Kap to their facilities for a workout. For the Chargers, they’d have a safety net if they don’t decide to start rookie quarterback Justin Herbert right away.

If you’re the Eagles, it’d be wise to have a legitimate backup behind QB Carson Wentz. He’s been injury-prone throughout his career, and he could use his very own safety net. Kap could easily fill Wentz’s shoes in Philly, and then some.

Spanning from 2011-16, we all saw what Mr. Kaepernick was capable of doing on the field for the San Francisco 49ers. His career statistics during that time frame are better than good. The 6-foot-4, 230-pounder created pigskin mastery. Kap tossed the football for 12,271 total yards through the air, ran the rock for another 2,300 yards, and visited the heezy 85 times during his short stint in the NFL. He secured a 72–30 TD to interception ratio, plunged for 13 rushing scores, and recorded a formidable 88.9 passer rating.

Furthermore, Colin helped lead the Niners on a run to Super Bowl 47 in his 2012-13 campaign. You can’t tell me he wouldn’t be able to have a similar impact after all these years. He’s completely fresh, he’s fit, and his throwing ability and freakish athleticism are still present.

I can’t speak for owners and general managers throughout the league blowing proverbial smoke with talks of Kaepernick workouts, but when head coaches are speaking about this still young 32-year-old man, we should listen. As headmen of their players, Anthony Lynn of the Chargers and Doug Pederson of the Eagles give the idea of potentially signing Colin a different tune.

With Colin’s extraordinary versatility as a runner and passer, even if he’s not starting, he’s still an intimidating presence if seen breaking either the Chargers’ or Eagles’ huddle. If not simply a threat to slow an NFL defenses’ readiness, why not go for the jugular with a Kap-centric gadget play.

He’ll most definitely be kneeling during the national anthem, but so will dozens upon dozens of his NFL comrades. I wouldn’t be shocked to see an even higher number. Whether they’re black, white, or another race altogether, it doesn’t matter. It could be unprecedented. Nearly every player around the league kneeling in solidarity as brothers. Not disrespecting the flag, but asking for equal respect to make our great nation’s flag mean even more.

Football IQ. Track speed. Cannon arm. Does that do anything for you? Well, it should. Regardless of politics, I believe this youngster can still play at the highest level. Enough talk. Please, do something. I want to see Colin Kaepernick “Kaepernicking” yet again.

During this time amidst police brutality, racial inequality, and the continuing COVID-19 pandemic, Kap could only shine a silver lining with his return to the most popular professional sports league in the world. Until next week, be smart, stay safe, and stay healthy.