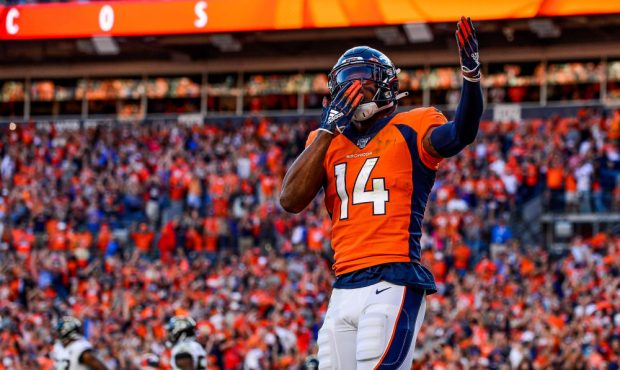 Without a doubt the Denver Broncos’ No. 1 wide receiver, Courtland Sutton shines brightly. Simply put, he’s a star. His breakout 2019 NFL season was a thing of beauty, and he did it while catching passes from three different starting quarterbacks. Not an easy task for a wideout. However, Sutton thrived with all three QBs. Joe Flacco, Brandon Allen, Drew Lock. It didn’t matter to Courtland. He made the adjustment from QB to QB look effortless.

Hailing from Brenham, TX, Sutton was selected No. 40-overall by the Broncos in the second round of the 2018 NFL Draft. Lock was taken No. 42-overall in the second round of the 2019 draft. Both taken at eerily similar times in the draft, Drew and Courtland already have an amazing rapport together. This most definitely bodes well for Denver’s offense.

Just a 24-year-old youngster, Courtland’s size at 6-foot-4 and 216-pounds makes him a gargantuan target for Lock. The Southern Methodist University Mustangs’ standout is rightfully still a ‘horse’ donning Broncos’ Orange and Blue.

In a piece I wrote before the kickoff of the 2018 NFL regular-season, I had a feeling Mr. Sutton would be the WR he is today. As I mentioned in the article, his size, strength, toughness, and body positioning are paramount additions to the Denver offense.

Dating back to 2017 with SMU, check out the body on this stud. Goodness, gracious. Look at those abdominal muscles. Talk about the anatomical specimen of a man. Wow. 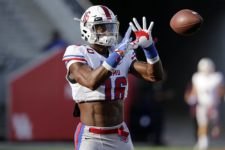 With his third NFL season looming in Denver, expect Sutton to make even bigger strides than he did in 2019. In my eyes, he has the potential to be a top-10 or even top-five WR in 2020-21. Courtland’s Pro Bowl campaign last season found the acrobat hauling in 72 pigskin plucks for 1,112 yards and six trips to the heezy. By the way, of those six touchdown receptions, Sutton pulled in several with just one-hand. Remarkable ball skills, folks.

The picture above says it all. This one-handed snag by Mr. Sutton counted as Lock’s first career TD pass against the Los Angeles Chargers. You’re welcome, Drew. See for yourselves what Courtland brings to the table in the Mile High City with this YouTube video of his best in 2019.

As you can see, Sutton’s catch radius is approximately the same size as Empower Field at Mile High. Okay, I’m joking. It’s clearly not that large, but he’s coming down with pretty much any football in his vicinity. I can’t wait to see what Courtland Sutton can provide in 2020-21 while helping the Broncos on a playoff push.

I’ll leave you with Mr. Sutton’s words of wisdom during this time of COVID-19 hysteria. Be smart, stay safe, and stay healthy everyone.

Sending prayer and love to all the families who are being affected by this circumstance. We will overcome! #FaithOverFear