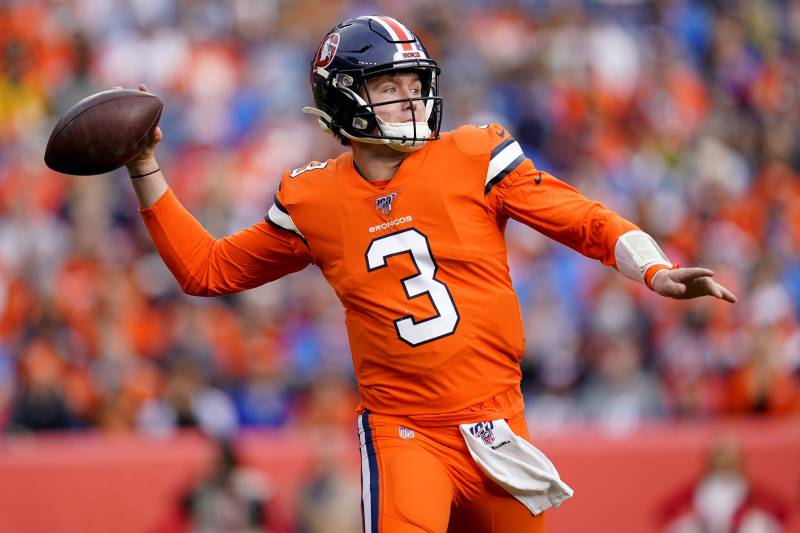 You have to go back to the signing of Peyton Manning in 2012 to find a legitimate starting quarterback for the Denver Broncos. Of course, Peyton isn’t just legitimate. He’s one of the greatest QBs to ever play in the NFL. Since the Broncos’ Super Bowl 50 Championship in their 2015-16 campaign, Manning’s last, a roller coaster with the loop-diddy-loops has defined the starting QB position in the Mile High City.

Brock Osweiler? No. Trevor Siemian? Negative. Paxton Lynch? A swing and a miss. Case Keenum? I honestly thought he’d be the one; however, next contestant. Joe Flacco? Well, that was a disaster. Brandon Allen? He showed promise, but he’s not the guy.

Wait a minute. What about Drew Lock? Ding, ding, ding. We have a winner, my friends. Say hello to the new franchise QB in Broncos Country. The University of Missouri Tigers’ product was taken No. 42-overall in the second round of the 2019 NFL Draft. Standing 6-foot-4 and weighing in at 228-pounds, this young 23-year-old pup can flat sling the pigskin all over the lot. He has the ability to toss the football from every arm angle, provide touch on dump-off passes and can throw deep-ball dimes as well as fire BBs into tight windows when needed. Lock can throw from every platform, and his mobility is perfect for Denver’s offense. Not necessarily a running QB, Drew can certainly pull the ball down and make a play. With his quick feet, he simply keeps plays alive outside the pocket.

One more thing. He’s a fiery competitor. Everyone loves that.

DENVER, CO – DECEMBER 29: Drew Lock #3 of the Denver Broncos walks off the field after a 16-15 win over the Oakland Raiders at Empower Field at Mile High on December 29, 2019, in Denver, Colorado. (Photo by Dustin Bradford/Getty Images)

After suffering a thumb injury in the preseason as a rookie last year, Lock was placed on injured reserve. It nullified his chance to be Denver’s starter come regular-season. Instead, Flacco took the reins of the Broncos’ offense. As stated above, his time under center in Orange and Blue was an absolute disaster.

Lock was named the starter and laced ’em up the next day in his debut against the Broncos’ AFC West rival, Los Angeles Chargers. Inside the friendly confines of Empower Field at Mile High, Drew went to work. Although his statistics weren’t even close to astronomical, a win is a win in the NFL.

With just 134 yards through the air, Lock tossed two touchdowns to one interception against the Chargers. But most importantly, he was straight money in the clutch. Drew facilitated a late drive down the field that culminated in a 53-yard field goal from Brandon McManus. The kick gave Lock and the Broncos a 23-20 victory. In Week 14 on the road at NRG Stadium, Mr. Lock had himself a dandy of a day. The Houston Texans were favored by nine points, but that didn’t matter. Lock helped the Broncos open up a 38-3 lead after a scoring drive to start the second half, and Denver held on to win, 38-24. Statistically, Drew finished the contest with 309 passing yards, three TDs, and one INT. Now, that’s what I’m talking about.

Finishing 4-1 as a starter his rookie season, I believe Lock will undoubtedly lead the Broncos to success in their upcoming 2020-21 frame. It took the legendary John Elway 10-games to reach four wins as a rookie with Lock doing so in a mere five games. Wow.

Drew completed his five-game stint with 100 completions on 156 attempts. A 64.1 completion percentage with a total of 1,020 yards through the air, seven TDs, and three INTs. Sounds like a franchise quarterback to me.