The 2020 FCS National Championship Game was a battle between the James Madison Dukes (14-1) of the Colonial Athletic Association and the North Dakota State Bison (15-0) of the Missouri Valley Football Conference.

The Dukes would receive the opening kickoff, and they didn’t waste any time getting to work. Quarterback Ben DiNucci was a perfect 5-5 for 41 yards. Also, the Dukes picked up 45 yards on 12 carries. Wide receiver Riley Stapleton would cap off the 17-play 86-yard drive with a five-yard touchdown reception that gave the Dukes an early 7-0 lead.

Not be outdone, the Bison took their opening possession right down the field as well. Quarterback Trey Lance did most of the damage on the drive rushing for 41 yards on six carries and completing his one and only pass for 13 yards. Facing a 2nd and 6 from the 35, the Bison were aided by a pass interference penalty that set up a first down at the 20. Four plays later running back Adam Cofield would run it in from a yard out to complete the eight-play 70-yard drive and tie the score at 7-7.

After a short five-play drive stalled for the Dukes, the Bison took back over from their own 31, and once again they didn’t waste any time putting up points. In just four plays, the Bison went 69 yards to take a 14-7 lead thanks to a 38-yard touchdown run from wide receiver Phoenix Sproles 10 seconds into the second quarter.

Looking to regain some momentum, the Dukes started at their own 35. DiNucci picked up 33 yards threw the air and another 16 on the ground. Facing 3rd and 8 from the 11-yard line, Percy Agyei-Obese only picked up two yards which led to a 26-yard field goal from Ethan Ratke, making the score 14-10 Bison with 9:37 left in the first half.

The Bison would begin their next drive from the 19. They methodically moved the ball down the field mostly behind the legs of Lance and running back Ty Brooks. Facing a 2nd and six from the 18, Lance appeared to have thrown an 18-yard touchdown, however, it was negated by an ineligible receiver downfield penalty. The Bison lined up for a 27-yard field goal attempt, or so everyone thought. Instead,  they ran a fake with safety James Hendricks and he scored from 20 yards out on 4th and 8, putting the Bison up two scores 21-10.

The Dukes were looking to stop the bleeding so to speak before halftime when they took over at their own 29. An unsportsmanlike conduct penalty moved the ball to the 44-yard line. After they crossed midfield, DiNucci found Stapleton for 18 yards down to the 26. The Dukes would only gain three yards on their next three plays to set up a 39-yard field goal from Ratke. Unfortunately, he missed, costing the Dukes an opportunity to cut into an 11-point deficit. The Bison ran out the final 1:40 of the half leaving the score at 21-10 as both teams heading to the locker room.

After a quick three and out for the Bison, the Dukes took over at their own 40. They moved the ball down the field mostly on the ground behind the legs of Ageyi-Obese and Latrele Palmer. DiNucci completed a pass to Stapleton for a one-yard loss on 3rd and 2 for the nine. Ratke would add his second field goal of the day from 27 yards out to pull the Dukes within eight at 21-13.

The Bison would again have a drive stall quickly, this time in just five plays and the Dukes took over at their own 14. DiNucci looked to have converted his second third down of the drive-by way of his arm but was unfortunately called for an illegal forward pass, giving the Bison the football back at their own 35 with 2:32 left in the third quarter.

The Bison would push this particular possession into the fourth quarter and were facing a 3rd and 23 after back to back negative plays. Lance would once again show his dual-threat ability by capping off the six-play 65-yard drive by scoring a 44-yard touchdown on the ground and putting the Bison up by two scores 28-13.

In desperate need of a score, the Dukes took over at their own 27. Unfortunately, they gave the ball right back to the Bison after a three and out. However, the Bison returned the favor with a three and out of their own and gave the Dukes the ball back with at the Bison 46-yard line with 11:24 remaining thanks to a 35-yard punt return by D’Angelo Amos.

The Dukes moved down the field on eight consecutive running plays down to the six-yard line setting up a 4th and 1. A false start would push them back five yards, but that didn’t phase DiNucci as he ran for six yards to move the chains and set up a 1st and goal from the five. Two plays later, he found Stapleton in the end zone and once again cut the Bison lead to eight at 28-20.

With just under seven minutes to go in the ball game, the Bison took over at their own 25. Lance used his feet and his legs to drive the Bison down to the 37 of the Dukes. On a fourth and two, Lance would be stuffed for only a one-yard gain and gave the ball back to the Dukes with 2:51 remaining.

Needing a touchdown and a two-point conversion to force overtime, the Dukes faced a 4th and 3 from the Bison 42-yard line. Showing poise under pressure, DiNucci found running back Jawon Hamilton for three yards to move the chains. On second and 10, DiNucci found Stapleton for 22 yards down to the 17. On a second and 5 from the 12, DiNucci was intercepted by James Hendricks and the Bison wrapped up their third consecutive FCS National title (eighth in the last nine seasons) with a 28-20 victory capping off a perfect season. 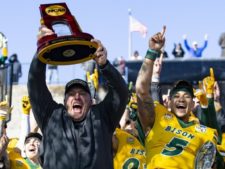 Redshirt freshman Trey Lance closed out an amazing season by being named FCS Championship Most Outstanding Player. He wasn’t asked to do much with his arm as he only threw for 72 yards, but he was outstanding with his legs rushing for 166 yards on 30 carries. The night before the title game, he won the 2019 FCS Walter Payton Award at the STATS FCS Awards Banquet in Frisco, Texas as the National Offensive Player of the Year. He finished with 3,886 all-purpose yards (2,786 passing, 1,100 rushing) and 42 total touchdowns. Also, he finished the season without throwing a single interception in 287 pass attempts.

North Dakota State wraps a decade of pure dominance. They have won eight of the last 10 FCS titles, compiling a 128-8 record since their first title in 2011. In the playoffs, they have been virtually unbeatable going 34-1, with their only loss ironically coming against James Madison in the 2016 FCS semifinals. This victory extended their FCS record winning streak to 37 games. They are the first division 1 school to go 16-0 since Yale in 1894.

17,866 fans in Frisco got their money’s worth in the 2020 FCS Championship Game. Congratulations to both James Madison and North Dakota State on excellent seasons.

Boston College Football: BC makes its first trip to Amherst since 1982