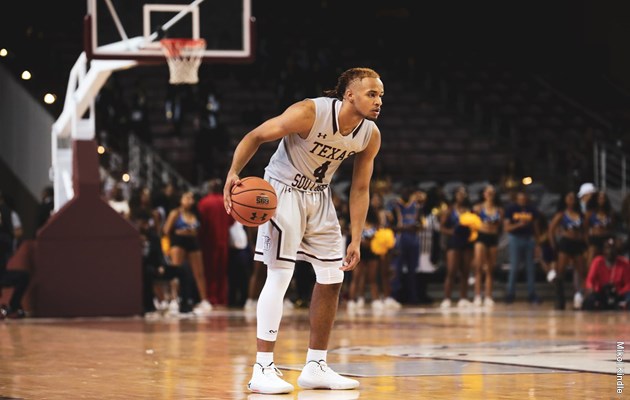 Four players scored in double figures as the Texas Southern Tigers defended its home court with a thrilling 71-67 win over rival Prairie View A&M Saturday night inside the H&PE Arena before 5,507 fans.

In typical TSU-PVAMU fashion, the contest started out intense as there were a total of 12 lead changes and five ties in the first half.

With 12 minutes left and the contest tied at 15-all, both teams went on scoring drought but Prairie View A&M would end its drought first as Gerard Andrus hit a jumper and sparked a 9-0 run for a 24-17 lead with 8:30 remaining. Sensing their backs against the wall, the Tigers answered the challenge with five straight points to get within 24-22 after Eden Ewing’s tip-in with 5:52 left.  Prairie View A&M took control shortly thereafter and upped its lead back to six at 28-22 nearly a minute later but Justin Hopkins and Yahuza Rasas took over and combined for nine points to key a 9-0 TSU run and a 33-30 lead at the 2:23 mark. Prairie View A&M would move ahead 36-35 with 56 seconds left after a pair of free throws but Ewing hit a free throw to tie the game at 36-all which held until the half.

Prairie View A&M scored the first points of the second half to move ahead but TSU went on a 9-0 run to regain a 45-38 advantage. TSU would never relinquish the lead after the run but had to fight off several PVAMU charges throughout the second half despite leading by as much as eight points. With 3:21 remaining, PVAMU’s Devonte Patterson capped off a 6-0 run to move them within 63-62 but Bryson Etienne rebounded his own missed three-pointer and drew a foul. He hit both free throws to move TSU back up 65-62 and the Tigers relied on their defense and forced a pair of Panther turnovers over the next minute. However, TSU turned the ball over with 2:06 left and Patterson hit a layup to draw within 65-64 with 1:52 remaining. Both teams would miss crucial jumpers on the ensuing possessions but TSU’s John Jones drew a foul with 53 seconds left and hit 1-of-2 free throws for a 66-64 margin.

Prairie View A&M’s Leon Sneed missed a potential game-tying layup and Etienne went the length of the court and logged a three-point play the old-fashioned way as TSU’s lead grew to 69-64 with 31 seconds left. Prairie View A&M would cut its deficit to 70-67 after a three-pointer but Etienne sealed the game with a free throw with eight seconds remaining.

Etienne led TSU with 18 points while Hopkins scored 16 points. Rasas posted his third double-double in four games as he scored 11 points with 13 rebounds and four blocks. Ewing rounded out the double-figure scorers with 10 points and five rebounds.

TSU is back in action next Saturday at Jackson State with a 5 p.m. tip-off.