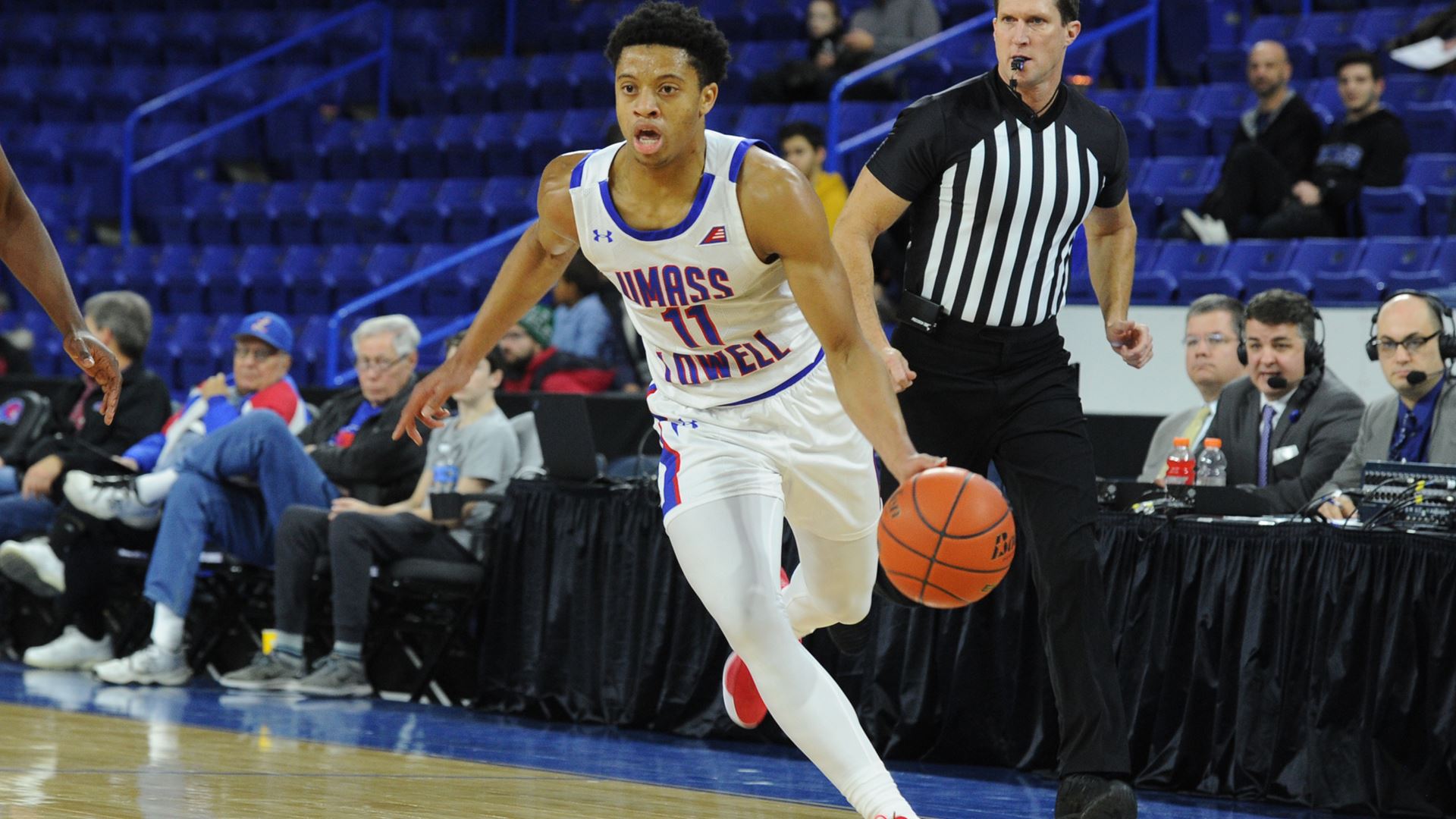 What they could not do on Wednesday night in their loss to Hartford, the UMass Lowell River Hawks ( 8-10, 2-1 in AE) did in their win over Binghamton (7-9, 1-2 in AE) on Saturday night. The 85-66 victory was clearly a better performance from start to finish. Having three guys in double-figures never hurts. Christian Lutete had 28 points, Obadiah Noel added 25 points and eight assists, and they got 16 off the bench from freshman Ron Mitchell that was too much for the Bearcats to overcome. The River Hawks were helped out by 17 Binghamton turnovers which they turned in to 20 points. They got the job done at the free-throw line going 13-for-16 on the night. The numbers were in their favor and so was the result.

But the thing that River Hawks head coach Pat Duquette talked about the most was the play of his point guard Jordyn Owens. His numbers do not jump off the page at you (four points, eight assists) but his defense did. His assignment was the second-leading scorer in the league in Sam Sessoms and Owens did the job. He held Sessoms to two points on the night. Sessoms came into the game averaging 19 a game, but he only took seven shots in the contest with Owens in his face and making life difficult for him all game long.

The game started out as a contest of runs. The River Hawks began the game on a 6-0 run that was matched by the Bearcats to tie the game with 17:14 left in the first half. Binghamton went on their best offensive display of the half and really the game. An 8-0 run gave the Bearcats a 21-15 lead with 9:40 left in the half. A three by Richard Caldwell Jr. (14 points on 5-of-9 shooting, 4-of-8 from three) started the run. An old fashion three-point play from freshman guard Hakon Hjalmarsson ended it. They would grow the lead to seven at 26-19 on a jumper from Pierre Sarr (14 points, 6-for-6 from the foul line) with 7:52 left in the half. From there, the River Hawks went to work and by the time halftime had arrived, the once seven-point deficit became a ten-point lead they would take with them to the locker room at 44-34.

The three double-figures scorers all had a hand in the late first-half turn around for UMass Lowell. Mitchell had six points on two three-point bombs. Noel had seven, including a buzzer-beating three at the end of the half. Lutete had seven as well. The River Hawks went to the locker room shooting 56% from the field (17-of-30) and 60% from distance at 6-of-10. Binghamton came into the game as the second-best three-point FG defense in the league allowing only 30%.

The second half was all River Hawks. They would never give up the lead they went to halftime with. It rose to eleven at 51-40 on a Lutete jumper with 16 minutes left. It became fourteen on two free throws by Mitchell to make it 54-40 with 12:50 to play. A Lutete three jumped the lead to seventeen at 68-51 with 8:53 to go in the game. It would reach twenty-one on a couple of free throws by Noel with 2:21 to play, 83-62 Lowell. All ten players on the River Hawks roster got into the game and did something positive to help get the win.

Afterward, the coach called it “a great team win.” He praised Owens for the way he guarded Sessoms and stayed out of foul trouble doing it. He also ran the offense very well dishing out eight assists while turning the ball over only once. Noel credited his game saying he “worked on my jumper during the summer” as helping him to become a better scorer. He is now only 74 points away from 1,000 for his career at UMass Lowell. The win was much needed as the team now heads out on a three-game road trip which gets started on Wednesday night at Maine.