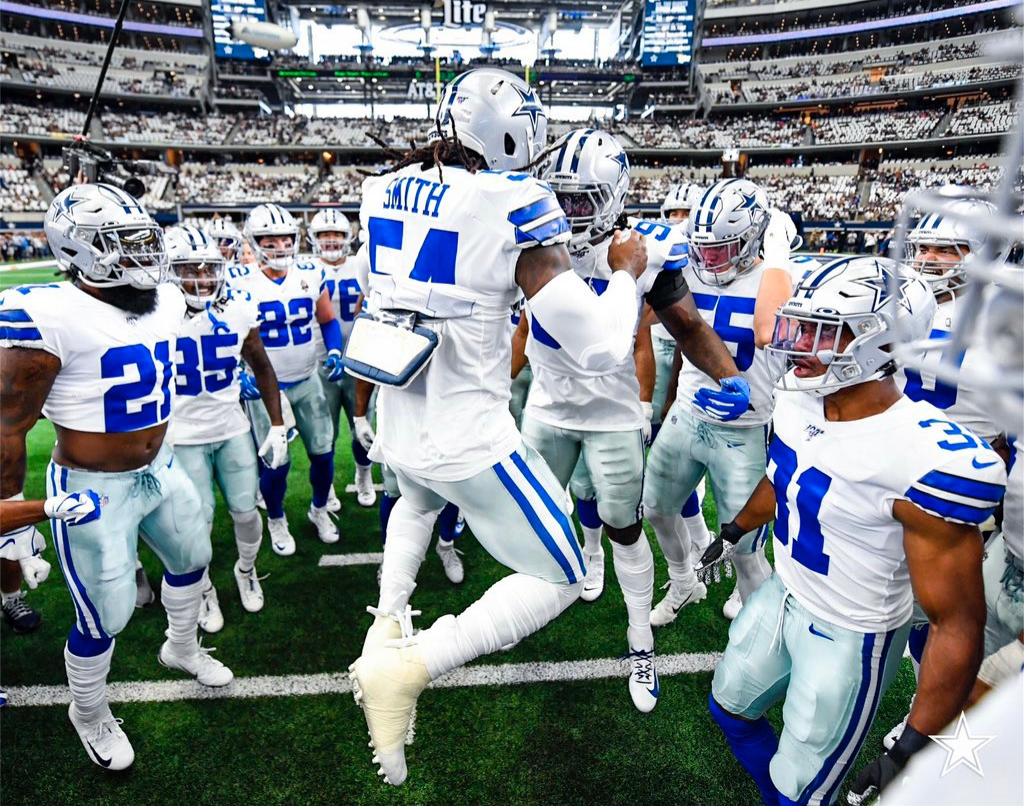 The Dallas Cowboys came into the 2019 season as one of the favorites to represent the NFC in the Super Bowl. However, it started with a bit of controversy when Owner Jerry Jones and All-Pro Ezekiel Elliott were engaged in a tough negotiating battle regarding a new long-term deal. After six weeks of back and forth behind the scenes and through the media, the two sides finally reached an argument just days before the season opener when Elliott signed a six-year 90 million dollar extension with 50 million in guarantees, and the Cowboys were off running.

The season couldn’t have started any better for the Cowboys. After three games, they were undefeated and had a two-game lead in the NFC East. Quarterback Dak Prescott had an outstanding 920 yards and nine touchdowns which included a perfect passer rating vs the New York Giants and completing 18 consecutive passes vs the Washington Redskins. Elliott was off to the best three-game start of his career with 289 yards rushing. Defensively, they continued the momentum from the previous season when they were a top seven-unit league-wide having only allowed 44 points.

Starting in Week 4 is when the Cowboys experienced their first-bit of turmoil this season. In a Sunday Night Football showdown with the New Orleans Saints, the Cowboys struggled mightily to establish the run as Elliott would only muster 35 yards on 18 carries. Prescott completed 22 of his 33 passes but failed to reach the end zone. This would spoil a stellar defensive effort by the Cowboys who held the Saints to just 266 yards of offense, only to fall short 12-10.

Week 5 vs the Green Bay Packers was a disaster from the outset. Prescott through two interceptions on the first three possessions and within the blink of an eye the Cowboys were in a 17-0 hole at halftime. The second half didn’t get any better as the lead eventually ballooned to 31-3. A big reason for this huge lead was the inability of the Cowboys defense to stop running back Aaron Jones. He had a career day with 182 all-purpose yards (107 rushing, 75 receiving) and scored four rushing touchdowns, a record for a Cowboys opponent. A late surge by the Cowboys wasn’t enough as they lost their second consecutive game 34-24.

When the Cowboys went on the road to face the 0-4 New York Jets it looked like the perfect opportunity to stop the bleeding from losing back to back games. Quarterback Sam Darnold was making his first start since Week 1 as he dealt with mononucleosis. He came out gun blazing throwing two first-half touchdowns as the Jets established a 21-6 lead at halftime. The Cowboys would ride the coattails of Elliott who had 70 of his 105 yards in the second half as they made a furious comeback. After a touchdown run by Prescott with 43 seconds left made the score 24-22, the Cowboys needed a two-point conversion to tie, but a pass to Witten was incomplete, giving Dallas their third consecutive loss.

The next two games vs the Eagles and Giants saw the Cowboys get back on track thanks to their defense and the legs of Elliott. The former forced seven turnovers and only allowed 28 points, while the latter posted back to back 100-yard performances, giving him five in the first eight games of the season. The Cowboys were sitting pretty at 5-3 atop the NFC East.

In Week 10 vs the Minnesota Vikings, the Cowboys would again struggle at home thanks to a big performance by an opposing running back. Dalvin Cook finished with 183 all-purpose yards (97 rushing, 86 receiving). Also, Kirk Cousins completed 23 of his 32 passes and threw two touchdowns, both to tight end Kyle Rudolph. With the Cowboys down by four with just over four minutes left, they took over at their own six-yard line. Prescott would march them down to the 11. After back to back runs by Elliott lost three yards, the Cowboys faced a 4th and 5 from the 14. Instead of throwing it to Amari Cooper or Randall Cobb, who both had over 100 yards, Prescott tried to hit Elliott in the flat. Unfortunately, the pass was knocked down by linebacker Eric Kendricks and the Cowboys lost 28-24 to fall to 5-4.

The very next week vs the Detroit Lions wasn’t the best defensive effort by the Cowboys as they gave up 27 points. However, their offense had one of it’s most productive games of the season. Prescott threw for 444 yards and three touchdowns. Michael Gallup had the second-best yardage game of his career (148) and Cobb had his second consecutive game over the century mark (115). Elliott only had 73 all-purpose yards but did manage to score two touchdowns. The Cowboys survived 35-27 to improve to 6-4.

Now, the playoff push was in full swing and the Cowboys still had a one-game lead in NFC East. Unfortunately for the Cowboys, the next three games would be a nightmare. They suffered their second three-game losing streak of the season and fell into a first-place tie with the Eagles.

The Cowboys would bounce back in Week 15 vs the Los Angeles Rams behind the legs of Elliott and rookie Tony Pollard. They both rushed for over 100 yards for the second time in the same game and the Cowboys as a team ran for a season-high 263 yards in a blowout 44-21 victory.

In Week 16, the Cowboys went on the road to play the Eagles with a chance to wrap up the NFC East title, but things didn’t go according to plan. Prescott failed to throw a touchdown for the fourth time this season and Elliott was held to only 47 yards rushing. A tough 17-9 loss put the Cowboys a game behind the Eagles going into the final week of the season.

The Dallas Cowboys wrapped up the season at home vs the Redskins needing a win and an Eagles loss to the Giants in order to make the playoffs. With everything on the line, they would follow the lead of their two most important players, Prescott and Elliott. The former had his seventh game over 300 yards passing, while the latter had his seventh game over 100 yards rushing. The Cowboys won easily 47-16, however, the Eagles defeated the Giants which ended the playoff hopes for Dallas. They finished a disappointing 8-8.

Despite an underwhelming season, there were a few bright spots for the 2019 Cowboys. Dak Prescott was a pleasant surprise with how much progressed. He threw for 4,902 yards (2nd in the NFL) and 30 touchdowns, putting to bed any doubts about his arm talent. Ezekiel Elliott, albeit quietly, had another excellent season. He finished fourth in rushing (1,357), tied for fourth in rushing touchdowns (12), second in total scrimmage yards (1,777) and tied for first in 100-yard games (7). Amari Cooper and Michael Gallup both went over 1,100 yards receiving. Tryon Smith made his seventh consecutive Pro Bowl, Travis Frederick was named a Pro Bowler for the fifth time, and Zack Martin made his sixth consecutive All-Pro team. Lastly, free-agent addition Robert Quinn led the team with 11.5 sacks even though he missed two games due to a suspension.

Defensively, the Cowboys took a step back from the top seven-unit they were in 2018. The finished ninth in total defense (10th vs the pass, 11th vs the run) which would suggest they were dominant. However, there were several times they allowed teams to build double-digit leads against them, making it difficult for the offense to be balanced in their approach.

For starters, the Cowboys have a lot of decisions to make personnel-wise. Listed below are the players who will be unrestricted free agents heading into the offseason. Long-term deals for Dak Prescott, Amari Cooper, and Byron Jones will definitely be the first priority of the front office. Also, names like Randall Cobb, Robert Quinn, and Sean Lee will be high on the list of tough decisions to be made as well. 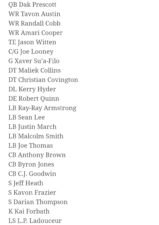 The coaching staff will also be different in 2020. The Dallas Cowboys parted ways with Jason Garrett after nine full seasons this past Sunday. A day later, they hired former Green Bay Packers coach Mike McCarthy to be the new head man in Dallas.

McCarthy has moved quickly in his efforts to assemble a solid staff for next season. He has already brought in Mike Nolan to be the new defensive coordinator and John Fassel to be the new special teams’ coordinator. Jim Tomsula is the top candidate to be the next defensive line coach for the organization. McCarthy wants to bring back first-year offensive coordinator Kellen Moore, however, he also has an offer to be the offensive coordinator for the Washington Huskies. Marc Colombo and Sanjay Lal won’t be back. Joe Philbin will take over as OL coach but that still leaves a vacancy at the wide receiver coaching position. Also, the status of running backs coach Gary Brown is up in the air, especially considering the organization met with Texas running backs coach Stan Drayton yesterday.

Plenty of changes will and must be made for the Dallas Cowboys heading into the next season. A revamped staff and a new roster are exactly what the organization needs in order to distance themselves from the Jason Garrett era. With free agency and the NFL Draft soon to come, the Cowboys will have a totally different look when they take the field in 2020.