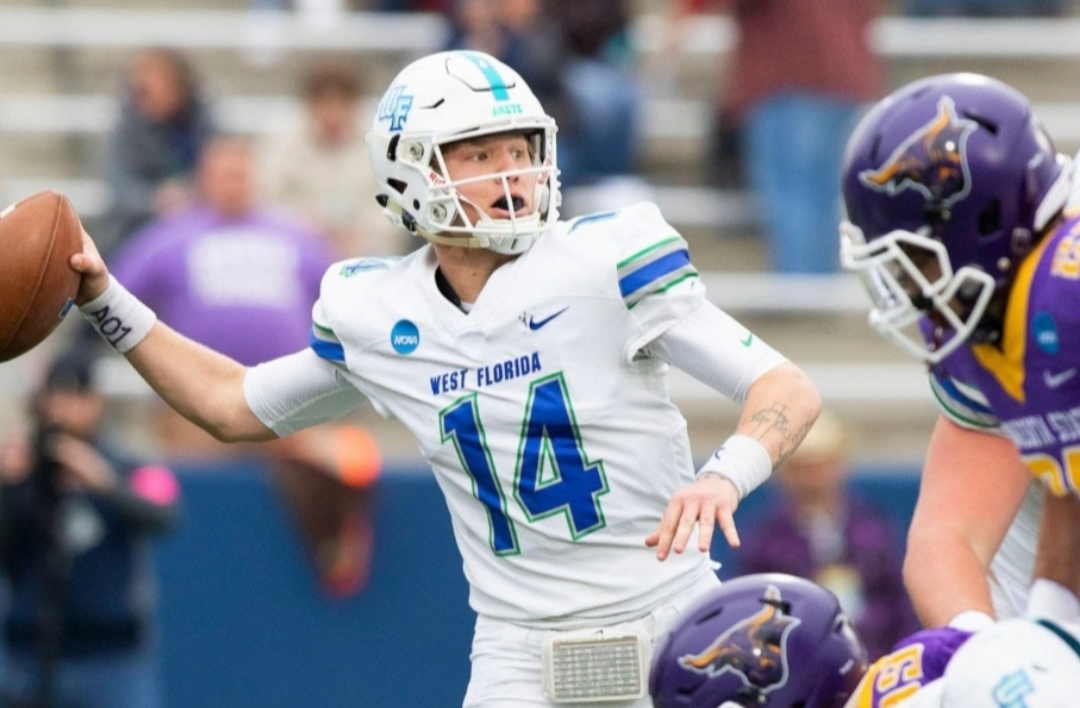 The Division 2 National Championship Game was a matchup between the West Florida Argonauts and Minnesota State Mavericks. The 11-2 Argonauts rolled in as the four seed having won three consecutive road games against undefeated teams including ending Lenoir-Rhyne’s 15-game home winning streak which was the longest in Division 2. The Mavericks came in as the three seed at 14-0 and possessing the top scoring offense in Division 2 at 48 points per game.

Quarterback, Austin Reed, of West Florida didn’t waste any time finding his rhythm on the game’s opening drive. He completed seven of his nine passes including a 5-yard touchdown pass to Kevin Grant ending a 13 play 72-yard drive giving the Argonauts an early 7-0 lead.

Mavericks signal-caller Ryan Schlichte came out of the gate on fire himself. He completed all three of his passes to start the game and the drive was capped off by him finding Wide Receiver Justin Arnold for a 38-yard touchdown tying the score at 7 all.

After being sacked on first down and throwing an incompletion on second down, Reed completed his final three passes for 80 yards, with the final one being a 14-yard touchdown to Ka’Ron Ashley as the Argonauts regained the lead at 14-7. Not to be outdone the Mavericks drove 60 yards in seven plays as Nate Gunn scored to even the score again at 14 ending an exciting first quarter of offensive football.

On the Argonaut’s third possession, Reed continued his unbelievable first half of play. He completed his final four passes on a 7 play 59-yard drive including his third first-half touchdown pass, this one to Quentin Randolph which gave West Florida a 21-14 lead.

Nate Gunn would fumble a few plays later and set up the Argonauts with excellent field position at the Mavericks 35. Fortunately for the Mavericks, their defense held serve and the Argonauts had to settle for a 31-yard field goal from Austin Williams which gave them a 24-14 lead.

JD Ekowa and Nate would then lead the Mavericks down the field with a nice mix of run and pass, with the latter capping off a nine-play 70-yard drive from six yards out and pulling Minnesota State to within three at 24-21.

Reed would need just 42 seconds to answer the Mavericks. A 34-yard strike to Randolph gave him his fourth touchdown pass of the half, and Randolph his second score as the Argonauts went up double-digits 31-21.

Schlichte and Gunn methodically led the Mavericks down the field on a drive that took almost five minutes off the clock. Unfortunately, Gunn was stopped for no gain on a fourth down at the one-yard line and the Argonauts took over. Reed, as he had done all of the first, moved the ball through the air with ease. This time, it only took 38 seconds as he and Randolph hooked up for their third touchdown of the game and the Argonauts took a 38-21 lead into halftime.

Austin Reed set a Division 2 Championship Game record with 399 yards passing in the first half, breaking the old mark of 361. Also, his five first-half touchdowns tied a championship game record.

The second half began with the Mavericks in a 17-point hole and in desperate need of a spark. They drove the ball 70 yards down to the three-yard line until Gunn fumbled for the second time and the Argonauts took over at the six-yard line. After their drive stalled on three plays, the Argonauts caught a big break as a Justin Taormina of Minnesota State fumbled a punt and West Florida took over with a short field at the 40. Reed would then put his name in the history books as his eight-yard touchdown pass to Tate Lehtio gave him six for the game, a new Division 2 title game record as the Argonauts took a commanding 45-21 lead.

With just under four minutes to go in the third quarter, the Argonauts were forced to punt at their own 18. Unfortunately, it went for negative three yards and Kaleb Sleezer of the Mavericks returned it 15 yards for a touchdown. A two-point conversion made it 45-29 West Florida which would be the final points of the quarter.

After a Minnesota State punt gave West Florida a short field they added a field goal to extend their lead to 48-29 with 14:40 left in the fourth quarter.

The Mavericks desperately needed to score in order to make it a two-possession game, but their drive stalled on downs at the West Florida 47. The Argonauts faced a second and 10 from the Minnesota State 36. Reed would make a rare bad decision as he was intercepted by Cade Johnson who returned it 35 yards to the 48-yard line. Schlichte would account for 41 of the next drives 45 yards using both his arm and legs and the Mavericks added a field goal making it a two-score game again at 48-32 with just under 10 minutes left to play.

West Florida would punt on their next possession and Minnesota took over deep in their own territory at the 10. Schlichte was poised and efficient completing seven of his 10 passes on a 13 play 90-yard drive that he finished by finding Shane Zylstra for a touchdown. A two-point conversion made it 48-40 with four minutes to play.

After a punt by West Florida, the Mavericks had one last attempt to even the score and force overtime with just over two minutes left in the game. Schlichte drove the Mavericks all the way down to the 18 in just over 90 seconds. However, his fourth-down pass to Zylstra was incomplete and West Florida would survive to beat Minnesota State 48-40 to win the 2019 Division 2 National Championship.

You have to give credit to the Minnesota State Mavericks for fighting the entire game and showing the heart of a champion. However, on this day, it would be the West Florida Argonauts who proved to be superior as they left McKinney ISD Stadium as the 2019 Division 2 National Champions.