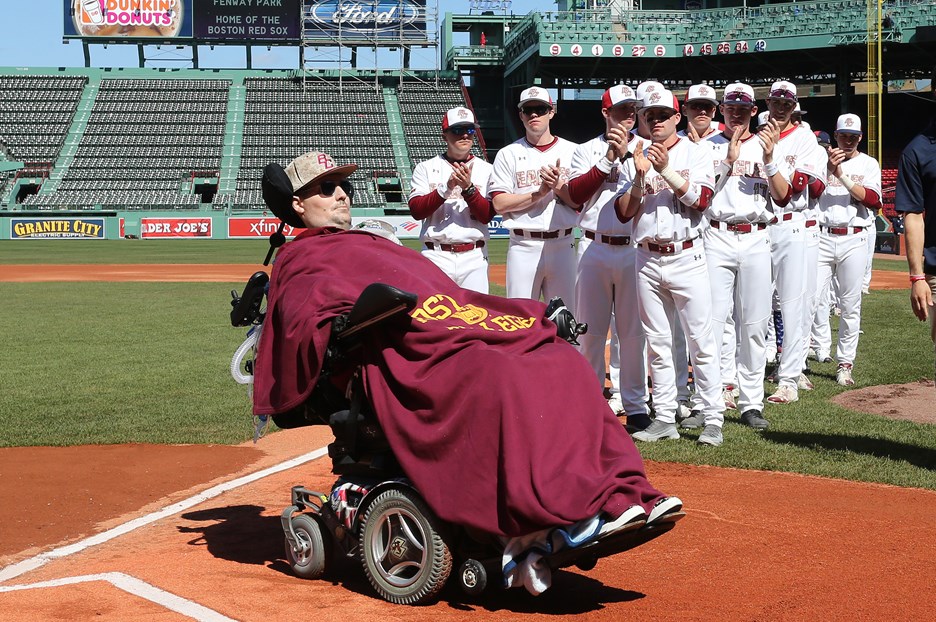 In August 2014, Pete Frates became a household name. The Ice Bucket Challenge swept social media as over 17 million people all over the world dumped freezing cold water on their heads in the name of research, fundraising, and awareness for the horrific disease amyotrophic lateral sclerosis (ALS). Frates – the former BC baseball captain battling the disease with a young wife and daughter – was the face of the campaign, putting his life on display to show the world what it could do to a vibrant, healthy and athletic human being.

Frates passed away on Dec. 9, 2019, at the age of 34 after a seven-year battle with ALS. It was not only a courageous fight, it was a public one. And it was a successful one. Frates set out to change the world and he did. The Ice Bucket Challenge raised over $220 million for research, which ultimately led to identifying a gene responsible for the degenerative disease. In May 2017, the U.S. Food and Drug Administration (FDA) approved a treatment for Lou Gehrig’s disease, 78 years after the famous ballplayer retired from the game.

Frates was the middle of John and Nancy Frates’ three children, raised in Beverly, Mass. He was a three-sport athlete at St. John’s Prep in Danvers. Mass., before arriving at the Heights. He played outfield for the Maroon and Gold from 2004-07 and captained the Eagles his senior year. Frates graduated in 2007 with a bachelor’s degree in communication. After his diagnosis in March 2012, he rejoined the team as the director of baseball operations. He married Julie (née Kowalik) – 2012 BC graduate – on June 1, 2013, and Lucy Frates was born on August 31, 2014.

Frates inspired millions and none more so than his BC Eagles. A close-knit program regarded as a brotherhood, the BC baseball team spans generations and Frates impacted them all. From his teammates who wore the uniform with him, to the players he traveled with as the director of operations, to the alumni he met at Mentor Night, which he created, Frates had a profound influence on all. A common theme among the student-athletes was to play every day for Pete. When they have a good game, they were excited to get on the phone and share it with Frates. When they had a bad game, not only did they look to him for encouragement but they remembered that his battle was much bigger than theirs and if he could pick himself up, so could they.

When Frates was confronted with his future at just 27 years old, he saw the fatal and debilitating prognosis as an opportunity. He would use his plight to help others and help the world. As history knows, that is precisely what he did. BC graduate and sportswriter Mike Lupica wrote about Frates in the fall of 2014 after the success of the Ice Bucket Challenge. When he asked Frates what it feels like to be at the front of a movement that everyone was involved with and will eventually change the world, Frates’ response was, “Hungry. I will not be satisfied until we see this thing through. Incredibly thankful. Restored faith in God. I know why I am here.”

In 2012, the Pete Frates #3 Fund was established to help subsidize medical care and expenses not covered by health insurance. In May 2017, the Frates family teamed up with the ALS Association to create the Peter Frates Home Health Initiative to help provide in-home caregiving assistance for individuals suffering from ALS in Massachusetts.

Since that fateful August, Frates garnered many well-deserved honors, keeping his name and his fight in the spotlight. At the end of 2014, he was named one of Time’s People of the Year, the co-recipient of Sports Illustrated’s Inspiration of the Year and ESPN’s SportsCenter feature about his fight was nominated for an Emmy. Frates saw his No. 3 retired at Eddie Pellagrini Diamond at Commander Shea Field in 2016 and he was awarded the 2017 NCAA Inspiration of the Year. His high school alma mater also retired his number, as well as dedicated the baseball field in his honor. Endicott College in his hometown opened Pete Frates Hall in 2016. In June 2017, Frates and his family donated the bucket used for his own Ice Bucket Challenge, along with memorabilia from his playing days at BC, for a display in the Baseball Hall of Fame in Cooperstown, N.Y.

Frates’ biography, “The Ice Bucket Challenge,” was released on Sept. 5, 2017, and Netflix announced production of a movie one year later, keeping his memory and fight alive for the ages. In September 2019, the Boston Red Sox marked the fifth-year anniversary of the Ice Bucket Challenge by presenting Frates with his own custom 2018 World Series ring. The team had signed him to an honorary contract before the start of the 2015 season and donned his number – along with the Eagles – at the annual spring training game in Florida that season.

On June 26, 2019, Boston College announced the naming of Phase II of the Harrington Athletics Village as the Pete Frates Center. During the press conference, William V. Campbell Director of Athletics Martin Jarmond said, “It’s truly special to have this state-of-the-art facility bear Pete’s name, especially after someone who was such a hard worker during his playing career at the Heights and was always looking to improve. Pete embodies our Jesuit motto of ‘men and women for others’ better than anyone I know.”

Frates is survived by his daughter, wife, parents, brother, Andrew, sister, and brother-in-law, Jennifer and Dan Mayo, nieces, Adelyn and Freya, and nephew, Jack. He leaves grandparents, cousins, aunts, uncles and many others known as “Team FrateTrain,” who were always ready at a moment’s notice to help in the fight. He leaves scores of friends, teammates, his Birdball brothers, advocates and countless others inspired by his actions, words and willingness to tell the world there needs to be a cure for ALS. Pete Frates leaves behind a legacy.

A Mass of Christian Burial will be held at St. Ignatius Church in Chestnut Hill, Mass. on Friday, December 13, at 11 a.m.