The up and down season of the Dallas Cowboys has been a very frustrating thing to watch. Coming off their second NFC East crown in three years, the Cowboys came into the 2019 season as one of the favorites in the conference to make the Super Bowl. Unfortunately, those high expectations haven’t remotely been met in the first 12 games of the season as the Cowboys are a disappointing 6-6.

Anybody can see their roster is full of talent and loaded with potential. However, that only gets you so far in the game of football. Every player in the league is talented in their own way and can perform at a high level on any given Sunday.

One of the biggest reasons for the Cowboy’s failures against teams with winning records is how underwhelming Dak Prescott has been in those games. His only good performance came a few weeks ago vs the Minnesota Vikings when he threw for 397 yards and three touchdowns. His other four games, though, have been shaky.

Back in Week 4, the Cowboys went on the road to face the New Orleans Saints. While Prescott completed 22 of 33 passes he failed to produce a single touchdown through the air. A week later vs the Green Bay Packers looked good on paper for Prescott, unfortunately, the real story lies between the numbers. Yes, he threw for a career-high 463 yards (323 in the second half) but his three interceptions led to 17 points as the Cowboys fell behind as much as 28 and lost 34-24. Last Sunday vs the New England Patriots he was pedestrian for the most part. He finished 19 of 33 for 212 yards but didn’t produce a touchdown through the air and threw an interception. Finally, there’s yesterday’s outing vs the Buffalo Bills. The 355 yards may grab your attention at first, but he also had two turnovers, including a fumble that led to a Bills touchdown.

Prescott came into this week as the NFL’s leader in passing yards and third in passing touchdowns. However, I can assure you that the Cowboys would trade those stats for more quality wins. 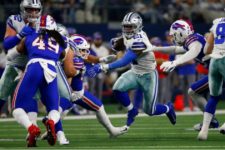 When you establish Ezekiel Elliott early and let him set the tone it makes the entire offense run smoother. That’s been the case since his rookie season and it’s continued in 2019. The Cowboys are 4-1 this season when Elliott goes over 100 yards rushing. As good as that is all five of those opponents currently have losing records. In the five games vs current playoff teams, Elliott hasn’t reached 100 yards once.

In Elliott’s defense, it hasn’t been because he’s played badly it’s been situations out his control. Against the Packers and Bills, he averaged over five yards per rush but when the Cowboys got behind several scores they had to throw in order to have any chance of a comeback, which eliminated Elliott from the game plan.

Against the Patriots last week, Elliott was running effectively to the tune of 86 yards on 21 carries. For some reason, though, the Cowboys abandoned the running game and simply decided they were going to sink or swim with the arm of Prescott, which failed miserably.

The Saints and Vikings games were minimal in terms of yardage for Elliott because the Cowboys offensive line got whipped all night long. It doesn’t matter how good of a runner you are if you don’t have the blocking up front you’re not going to succeed.

If the Cowboys want to make the playoffs for the second straight season they have to remember that Elliott is still their biggest offensive threat and establishing him is extremely crucial.

The defense isn’t without blame either when it comes to how the Cowboys have performed vs current playoff teams. They have had two lights out performances against the Saints and Patriots holding them to a combined 25 points. The other three current playoff teams the Cowboys have faced have had field days offensively, averaging nearly 30 points per game.

So as you can see, the Cowboys have been inconsistent all season which explains their 6-6 record (0-5 vs playoff teams). If they don’t establish some form of rhythm and soon they’ll be on the outside looking in when the playoffs start.

Ezekiel Elliott: “They’re going to have to drag me off the field”

Cowboys vs 49ers: Will Dallas’ Defense Lead Them to Divisional Round?