Welcome to the most comprehensive Pitt Panthers Game Day Preview on the internet! This is your one-stop shop for everything you need to know about Pitt and their upcoming opponent! Mike Drakulich (@PghSportsNation) brings you inside the huddle for both teams, providing all fans with a game story, Pitt’s key’s to success, score prediction, game information, a detailed breakdown of each team, including individual stats, team stats, and team injury reports. Heck, you’ll even know the weather at kickoff! The only thing you’re missing is a game uniform!

When the Pitt Panthers (7-4, 4-3) take the field Saturday at Heinz Field, it will be the final time for 18 seniors, and possibly a few underclassmen, who may enter the NFL Draft early if they get good evaluations from scouts.

Damar Hamlin, a senior out of Central Catholic, is proud to continue the success of local players like Tyler Boyd and Jordan Whitehead, who came to Pitt and then found their calling in the NFL.

“Just being put in that conversation is the reason why I came to Pitt in the first place,” Hamlin said, “was to be able to do something like play for my city and give my city a reason to cheer, give them something to brag about.

“Of course, if you can be the hometown hero, why not?”

Everyone wants to leave this game on a high note, and enter their Bowl game feeling confident, but the Panther’s will have to shake off the bitter memories of being shutout last week at Virginia Tech, 28-0. That loss knocked Pitt out of the running for a 2nd ACC Coastal Division championship.

“We haven’t played another game yet so we’re still kind of feeling it,” senior cornerback Dane Jackson (who played at Cornell & Quaker Valley) said. “But we’re trying to put that behind us and focus on Boston College.”

Amir Watts headed to Pitt from the mean streets of Chicago, and his coaches are proud of the man he has become while at Pitt.

“Most of us get into coaching for developing men,” said defensive line coach Charlie Partridge. “Amir, since the day I walked in the door to where he’s come now, just in how he handles his life, I’m really, really proud of him.”

Senior Saleem Brightwell will be remembered for intercepting Deshaun Watson at the goal line, which was instrumental in Pitt’s upset over Clemson in 2016.

“You could argue he’s one of the (most influential) emotional leaders on our entire football team,” Partridge said. “When he speaks in the locker room or the team meeting room, he’s coming directly from his heart. There’s no filter. What is on his heart is coming out of his mouth. The team knows that. They know where he’s coming from. They know he loves this place and wants to see everybody do well.

“Because it’s so sincere, both sides of the room, offense, defense, feel Saleem. That’s what you want out of your seniors.”

Another senior who is hopeful to return after suffering a broken jaw vs Georgia Tech is Maurice Ffrench, who leads the team with 75 receptions.

“The general public doesn’t see all the things that happen behind the scenes,” said Chris Beatty, who is Ffrench’s position coach. “When they told him about the injury and weren’t sure what his diagnosis was, we’re sitting in here and he’s bawling.

“That’s hard, as a coach, to take, not knowing if he’s going to be able to come back for Senior Day or a bowl game.”

Ffrench’s return couldn’t come at a better time, as Boston College is dead last in the ACC in pass defense, giving up 297.5 yards a game through the air.

“We’re happy to have him back,” Beatty said. “And it’s Senior Day, too. I’m just excited for him to be able to be back.”

Inaccurate passing and dropped passing were a killer ingredient in their shutout vs the Hokies. The Panthers had been playing with fire all season, and this time it caught up to them in the worst way.

“It was not the Pitt football team that I’m used to seeing,” Pitt head coach Pat Narduzzi said. “Offensively, didn’t play up to where we need to. Why? We just never got in rhythm. It’s happened a couple times this year.

“We dropped the first four passes, and nobody can catch fire. It’s hard as a play-caller when it’s three-and-out. You never get into a rhythm.”

Narduzzi was truly expecting more out of his sophomore quarterback in Kenny Pickett.

“Sometimes, it’s accuracy. Sometimes, it’s trust. It’s a lot of things,” the coach said when asked to detail Pickett’s problems. “He got a little bit flustered, which I think anybody in this room would. When you turn the ball over (the Hokies returned a fumble for a touchdown), it’s hard. I don’t think he had a great series, the next series.”

“He missed Taysir (Mack) on a skinny post that could go. We had another route in the red zone that’s a touchdown. He had V’Lique (Carter) wide open over the middle, and he just didn’t see it.

“But it happens in every game. I’m watching a lot of tape now, and there’s a lot people who miss guys. We’re not the only quarterback in the country who’s not perfect, as well as the coaches.”

Entering the final game of the regular season, Pitt is averaging just 20.2 points, which is way worse than the 25.6 of last year that saw former OC Shawn Watson get canned. Lack of a running game has hampered Pitt all year, to boot.

“We’ve thrown it all year,” Narduzzi said. “That’s kind of been our bread and butter. We’ve had success doing it.

“But we certainly wanted to run it more (at Virginia Tech), especially with the weather conditions. You try to get the passing game to open up your run game, and that didn’t happen.”

This is a game where Pitt’s defense must own the trenches. Paris Ford will have to sit out the 1st half thanks to the dreadful Targeting call against him last week while making a tackle in the Hokies game. I could go on and on about ACC officiating, but what’s the use?

Ford, a redshirt sophomore, leads the Panthers in tackles with 82. He’s also forced three fumbles (7th in the nation), defended 14 passes (10th) and has three interceptions, one for a touchdown. His presence will be missed during the first 30 minutes, especially with Pitt focusing on stopping BC’s running game behind the the very talented A.J. Dillon.

Expect Pitt’s defense to do just that, and for the Panther offense to wake up against one of the ACC’s worst defenses. The last time out at Heinz Field saw the Panthers put up 34 points and Kenny Pickett threw for 359 yards against UNC. 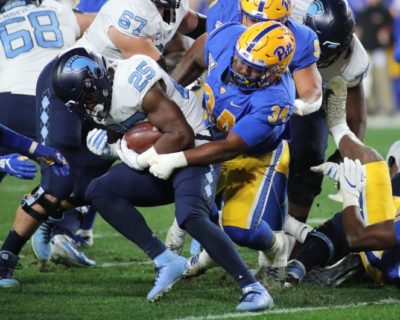 Pitt is 17-13 overall vs Boston College

Tough kid, has a good arm, but may not be Pitt’s answer at QB. Needs to improve accuracy, especially downfield.

Talented ball carrier, but has room for improvement.

Versatile player who also moonlights at WR and at cornerback.

Has done well when his number has been called. Injuries have slowed him down.

Has all the talent in the world. Being implemented into the passing attack more each week as he is fully healthy.

Physical player, but drops way too many passes.

Has done the best he can while playing for the injured Anthony Brown.

A man’s man when running the ball. Is definitely suiting up on Sundays.

Leads the Eagles with 428 yards receiving.

One of the worst… giving up 457.1 in total yards, and an astounding 297.5 yards through the air. Have only gotten to the opposing QB 12 times this year.

BC BASEBALL: Eagles Head to ACC Tournament in Lousville

BC BASEBALL Falls to Minnesota in Port Charlotte

Alabama State Gets Mauled by Auburn, 62-0