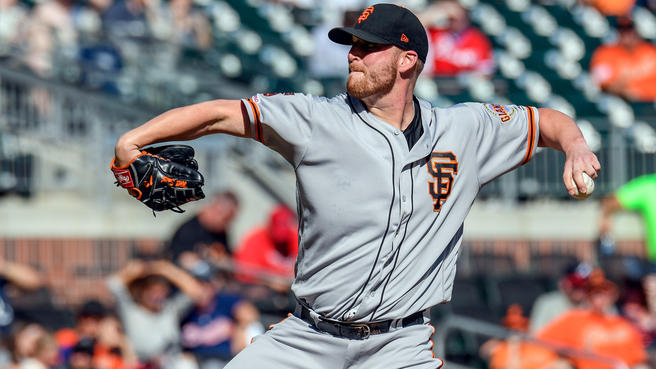 The last week in MLB was about a reliever signing a multi-year contract in the National League, a pitcher in the NL wins a prestigious award, and a player in the American League is named MVP.

The Atlanta Braves made the first significant move of the offseason as they signed reliever Will Smith to a three-year, $39 million contract. The deal also includes a 2023 club option worth $13 million, per a team announcement.

Smith was one of the best free-agent relievers available on the market, and the Braves adding him to their bullpen was a smart move.

Smith was terrific with the San Francisco Giants last season as he posted a 2.76 ERA in 63 games (65 1/3 innings pitched).

The interesting aspect regarding the signing of Smith is that is his agent Jeff Berry of CAA used the qualifying offer from the Giants as leverage for his client, per Ken Rosenthal of The Athletic.

Will Smith’s agent, Jeff Berry of CAA, effectively used the qualifying offer as leverage, telling interested teams he wanted a deal by today’s deadline or Smith would accept the one-year, $17.8M offer from #SFGiants. In the end, the #Braves bit.

Smith was going to accept the one-year, $17.8 million qualifying offer from the Giants, but the Braves stepped up with a multi-year contract.

The Braves are still planning to utilize Mark Melancon as their closer, Smith will occupy the set-up role, per Jon Heyman of MLB Network.

Braves are still planning to use Melancon as closer. So Will Smith will set up.

The club has a solid duo at the backend of their bullpen with Smith and Melancon.

New York Mets starting pitcher Jacob deGrom had a dominating 2019 campaign and earned some hardware last week for his effort on the mound, as he won the National League Cy Young Award.

This was the second consecutive season in which deGrom won the NL Cy Young, and became the 11th pitcher to accomplish that feat, per Anthony DiComo of MLB.com.

And it is official: Jacob deGrom won the National League Cy Young award, becoming the 11th pitcher to do so in consecutive seasons.

He is, by any measure, one of the best pitchers of this generation.

He made more history by becoming one of six players ever to compile consecutive seasons with at least 250 strikeouts and an ERA below 2.50, per ESPN Stats & Info.

He's one of 6 players ever to post consecutive seasons with at least 250 strikeouts and an ERA below 2.50.

The other 5 pitchers are all in the Hall of Fame, and 4 of the 6 won consecutive Cy Youngs during their span. pic.twitter.com/qxa7x2vtVP

deGrom proved once again last year he’s one of the best starting pitchers in the NL.

He has a chance to make history if he wins the award next season as just two pitchers have won more than two straight Cy Young awards, per Sarah Langs of MLB.

Only 2 pitchers have won *more than 2 straight* Cy Young awards:

At 28 years old, Trout is the second-youngest player to win three MVP awards.

The only player to accomplish it at a younger age is Stan Musial, who won his third MVP at age 27, per ESPN Stats & Info.

The only player to do it a younger age is Stan Musial, who won his 3rd at age 27. pic.twitter.com/MGMQvwF7DI

Trout has been building an impeccable resume ever since his debut several seasons ago, per MLB Stats.

.@MikeTrout's career is off to a pretty good start. pic.twitter.com/CBMZ8qS7Sw

He is a unique player that doesn’t come around often and is bound for Cooperstown.