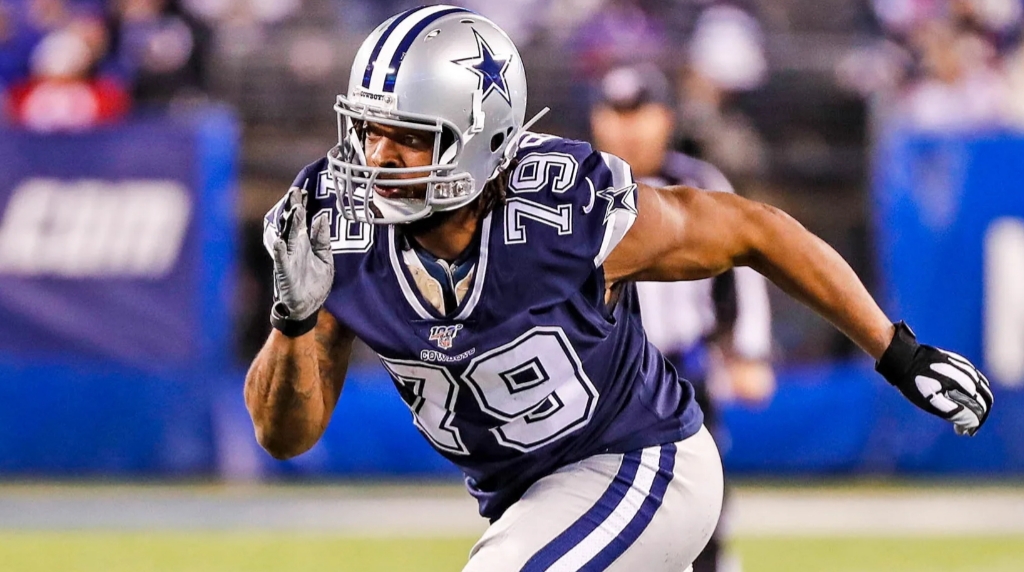 When the Dallas Cowboys went on their bye week after a 37-10 beatdown of the Philadelphia Eagles they were left with a hole to fill. Defensive end Tyrone Crawford was placed on injured reserve on October, 15th due to hip surgery to fix a hip issue. Just before the NFL trade deadline, however, the Cowboys made a move to counter that unfortunate loss by acquiring defensive end Michael Bennett for a seventh-round pick from the New England Patriots.

Just prior to his Cowboys debut Bennett restructured his contract to become an unrestricted free agent in 2020. He can earn close to two million in base salary and roster bonuses as well as 750,000 in incentives with the last year of his old deal deleted.

With all the numbers finalized it was time to see how Bennett would fit into the Cowboys rotation. He has the unique ability to rush coming off the edge or from the interior. The Cowboys can pair Bennett with either All-Pro DeMarcus Lawrence or Robert Quinn to get pressure from the perimeter. Also, they can pair him with either Maliek Collins or Antwaun Woods inside and keep Lawrence and Quinn on the field as well. This past Monday night vs the New York Giants all these options would be on full display.

Early in the second quarter, the score was tied 3-3 when the Giants were in the red zone. In the video below, the Cowboys pair Bennett on the interior with Woods and have Lawrence and Quinn coming off the edge. Bennett explodes off the line and defeats guard Will Hernandez easily and stops Saquon Barkley for a loss. He shows amazing power for a guy 275 pounds going up against a man who tips the scale at over 300.

Welcome to the #DallasCowboys, Michael Bennett.

Bennett blows up the run by Saquon Barkley. pic.twitter.com/vZA9d78RtS

The next video is an example of Bennett’s ability to line up on the interior but wreak havoc from the perimeter. Again, the Cowboys bring pressure from the edge with Lawrence and Quinn, however, this time they pair Bennett inside with Christian Covington. They bring Lawrence on a stunt inside and Bennett goes outside and bull rushes the right tackle almost right into quarterback Daniel Jones and picks up his first sack as a Cowboy. Very creative design to get pressure there.

Michael Bennett with the sack! pic.twitter.com/v7t2q0LLC9

The final video shows Bennett’s ability to be effective as a defensive end. This time he’s paired with Quinn on the outside as Collins and Woods lineup inside. Bennett shreds the block of the tight end and stops Barkley for a minimal gain. This was another big play from Bennett in the red zone.

Here is Michael Bennett making a play as a LDE: pic.twitter.com/y7SFFrRzFn

Bennett was very impressive in his first game with a star on his helmet. He finished with three tackles, four quarterback pressures, four quarterback hits, and a sack in 42 defensive snaps. It’s very rare to see a player come in with such an impact right away. Fortunately for the Cowboys, Bennett played under current defensive coordinator Kris Richard in Seattle. All three of his Pro Bowl selections came playing under Richard from 2015 to 2017 so he was very familiar with how to use Bennett in a variety of ways.

Position flexibility is the main reason the Cowboys made the move for Bennett before the trade deadline. He caused problems from both the outside and the interior against the Giants and allowed the Cowboys to use a number of different combinations to stop the run as well as get pressure on the quarterback.

The Cowboys added Amari Cooper via trade midseason in 2018 and it changed life for Dak Prescott and the entire offense as the Cowboys won seven of their final nine games to finish 10-6 and won the NFC East. Will Bennett have the same impact on this defensive unit as the Cowboys look to remain atop the division and make the playoffs for the second consecutive season? Only time will tell but one thing is for sure, he’s off to a great start.