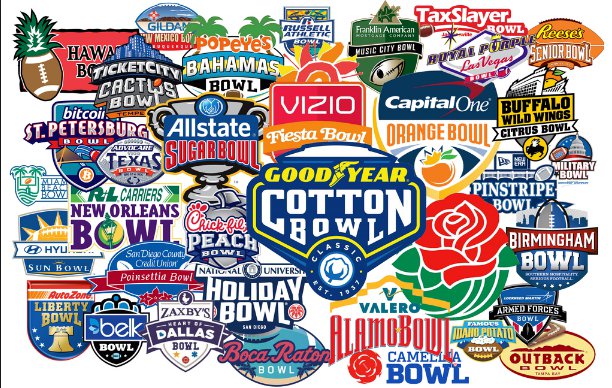 The college football bowl slate was revealed in full Sunday. As usual, the slate is filled with potential classics and potential duds. Let’s break down some of the best, and worst, matchups.

Orange Bowl: No 1 Alabama vs. No. 4 Oklahoma

Georgia made Alabama human for three quarters, leading some to clamor for an SEC Championship rematch between in a semifinal game. It ended up being the Sooners, rather than the Bulldogs, who snagged the four seed and booked a date with the Crimson Tide. Kyler Murray is built for shootouts, and it feels like this game could be one. In the end, Oklahoma’s defense is the weakest unit in the game and it’ll prove the difference. Tua Tagovailoa should return to his post hungry to erase the memory of the Georgia game and ready to one-up if Heisman finalist counterpart.

Since slipping by Syracuse without Trevor Lawrence, Clemson has outscored opponents 400-94. The Tigers, despite being criticized for the weak ACC, did play, and dominate, then-ranked Boston College and NC State during the dominant stretch. Neither Cotton Bowl QB will have been the team’s opening week starter, as Lawrence replace Kelly Bryant and Ian Book took over for Brandon Wimbush. There’s potential for this game to be tight all night. Notre Dame’s defense can limit Lawrence and Book, with time, could exploit holes in Clemson’s secondary. However, it just feels as if Clemson’s road to redemption against Alabama can’t be denied. The Tigers could run away with this one thanks to Travis Etienne and its ferocious front four.

The Rose Bowl marks the end of the Urban Meyer era at Ohio State, capping off a tumultuous 2018 season for the Buckeyes. First, there was the domestic abuse cover-up scandal. Then top prospect Nick Boss left the program to focus on the 2019 NFL Draft. Then came the season-derailing beatdown at the hands of Purdue. Then came the season-saving beatdown of Michigan. Finally, the news broke that Meyer has an arachnoid brain cyst. Lost in all this was the record-breaking season of quarterback Dwayne Haskins who set the new Big 10 single-season marks for total yards and total touchdowns. Haskins’ draft stock has skyrocketed; the QB, now a Heisman finalist, is now rated as an early first-round pick. On the other side of the ball, Washington again failed to replicate its successful 2016 campaign, finishing 10-3. In his sophomore season, Jake Browning threw 43 touchdowns. over the past two campaigns, he has totaled 35. Browning, a four-year starter, will look to end his Washington career on the right foot before handing the ball off to one of the Huskies two top-70 quarterback recruits, Colson Yankoff or Jacob Sirmon.

Georgia made Alabama look beatable in the SEC Championship, a feat that isn’t accomplished too often. In a cruel reversal of fortune, Georgia’s dreams were crushed when Jalen Hurts led an Alabama comeback after Tua Tagovailoa went down with an ankle injury; Hurts had been the backup since he was pulled for Tagovailoa’s coming out party against Georgia in last year’s National Championship. Still, Georgia almost became the first two-loss team to crack the committee’s top four, indicating just how highly the nation regards the Bulldogs. Texas, a college football blue-blood, is finally climbing its way back to relevancy with the only win over a 2018 playoff team and a respectable showing in the Big 12 championship. This game could either serve as proof that Georgia deserved in or that Texas has officially returned to college football’s upper-echelon.

It’s déjà vu for UCF: another undefeated season that doesn’t lead to a trip to the College Football Playoffs. This time, however, the Knights will be without team leader McKenzie Milton who suffered a gruesome leg injury a few weeks back. Backup Darriel Mack Jr. stepped in and started the conference championship game. All he did was throw for 348 years and 2 touchdowns, and he ran for 4 more. This game against LSU’s top-notch secondary led by Greedy Williams feels like it’s missing something with Milton out. Regardless, a win with Mack Jr. under center would go a long way towards opening a door for a Group of Five team to one day get into the playoffs. In the very least, it’d intensify the conversation for an 8-team bracket.

Arguably the best non-New Year’s Six game pits Will Grier’s Mountaineers and Eric Dungey’s Orange. Grier has a lively arm that, when paired with receivers David Sills and Gary Jennings, allows West Virginia to score with the best of them. Dungey is a dual-threat QB; he pairs a hard-nosed running game with a pocket presence. You might want to grab some popcorn and take the over.

While Washington and Ohio State travel to Pasadena for the Rose Bowl, the losers of the Big 10 and Pac 12 championships will meet up in San Diego on New Year’s Eve. While both would like to be playing 100 miles north up Interstate-5, neither program has any reason to hang its head after successful 2018 campaigns. Northwestern played every opponent tight, the good and the bad. Interpret that as you will, but, despite the loss to Akron, it led to near upsets of Michigan, Ohio State, and Notre Dame. The Utes, meanwhile, played the Pac 12’s best defense, and own one of the most fundamentally sound special teams in the nation.

A surprise for all those who expected to see Missouri face an ACC team, the Music City Bowl pits two teams who boast more potential than their near-.500 records would indicate. Jarrett Stidham and the Tigers fell short of loft playoff aspirations, but remember this is still the same kid who torched Alabama and Georgia in a three-week span last season. Purdue turned it’s season around after an 0-3 start and defeated Ohio State in a nationally televised matchup that likely kept the Buckeyes out of the playoffs. Freshman wide receiver Rondale Moore is a name you’ll want to know for this game and for the next few years.

Hunting for a diamond in the rough:

Hey, two years ago UAB didn’t have a football team. Now the Blazers are playing in back-to-back bowl games, this time as Conference-USA champions. This is also one of only three matchups, along with the Rose and Orange Bowls, that features two conference champions squaring off.

Both teams stumble into this game after having had New Year’s aspirations less than a month ago. Boston College lost its final three games after Clemson came to Chestnut Hill for a College GameDay game for control of the ACC. Boise State hoped to get the Group of Five’s New Year’s Six bid. The Broncos, however, lost to Fresno State in a snowy Mountain West championship. Still Boise State quarterback Brett Rypien and BC running back AJ Dillon are two of the most dynamic offensive players in the nation. Rypien versus BC’s edge tandem of Wyatt Ray and Zach Allen is one to watch.

This matchup features two of the best Group of Five quarterbacks in Mason Fine and Jordan Love. Both finished in the top 16 in passing yards this season and had an incredibly similar touchdown to interception numbers (Fine had 27 TDs/5 INTs and Love had 28 TDs/5 INTs). Watch this matchup if your NFL team is going to need a QB in the next year or two. Fine is a potential sleeper in next April’s draft, while Love still has one more year of eligibility.

My how the mighty have fallen. These two squared off in the Orange Bowl last season after narrowly missing out on the College Football Playoff. Both were expected to exceed 2017 expectations, and neither did. The one positive is that Wisconsin’s Jonathan Taylor can provide an instant spark. The problem is that the game is in New York, in December. Remember how last year’s Pinstripe Bowl went with stud running backs, AJ Dillon and Akrum Wadley?

This is by far the least appealing of the New Year’s Six games. While Michigan and Florida are brand-name schools ranked inside the top-10, Florida never stood out as must-see TV this season and all of Michigan’s progress was wiped away with the Ohio State game. The better alternative would’ve been to have Florida face UCF and LSU face Michigan. UCF would finally get its chance against a top Florida football school, and LSU and Michigan have never played before. The reality is a Peach Bowl that is subtly a big game for Jim Harbaugh.

It pains me to put Justin Herbert and Oregon on this list, but it’s through no fault of the Ducks dynamic offense. In fact, that saves this matchup. Herbert, likely the first quarterback off the board in April, will face arguably his toughest defensive test to date in the stout Spartans defense. However, you may want to change the channel when Michigan State’s 116th ranked offense takes the field.