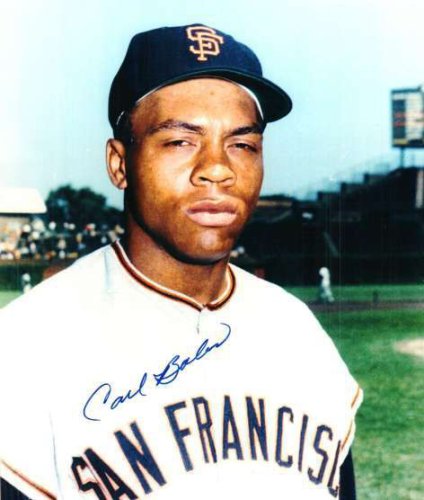 Eighty-seven-year-old Carl Boles, who resides in Tampa, Florida, had the proverbial cup of coffee in the big leagues—the outfielder from Center Point, Arkansas debuted with the San Francisco Giants on August 2, 1962, and his last appearance in “The Show” was on September 27th of that same year. In 19 career games for the Giants, he came up to bat 24 times and collected nine hits.

Boles — who blogger Tony Hayes suggested was Willie Mays’ doppelgänger in a post for the Sports Radio Service two years ago, would be just another footnote in the annals of the national pastime if it weren’t for one important thing: he is one of 609 men currently not receiving an MLB pension.

Others in the same boat include former New York Mets and Los Angeles Dodgers pitcher Hank Webb, who went on to become the executive director of the Clearwater Services for Youth after hanging up his spikes, and Mike Eden, a utility infielder for the Atlanta Braves and Chicago White Sox who also resides in Tampa.

Boles and all the other retirees don’t receive a traditional pension for having played the game they loved because the rules for receiving MLB pensions changed over the 1980 Memorial Day Weekend. None of these men accrued four years of service credit, which was what ballplayers who played between 1947 – 1979 needed to be eligible for a pension.

Instead, effective April 2011, for every 43 game days of service a pre-1980 player accrued on an active MLB roster, all he gets is a yearly payment of up to $10,000. For instance, all Boles gets is $700 for his two months of service. Which is after taxes are taken out.

What’s more, the payment cannot be passed on to a surviving spouse or designated beneficiary. So none of Boles’ loved ones, such as his wife, Mercedes, will receive that payment when he dies.

By comparison, post-1980 players like Wander Franco, who recently signed an 11- year deal with the Tampa Bay Rays worth $182 million, with a club option for the 2033 season, only need 43 game days of service on an active roster to get a pension.

What makes this so unseemly is that the national pastime is doing very well financially. The average salary is $3.7 million, the 25th man on the bench receives a minimum salary of $575,500 per year and, in its 2021 edition of MLB team valuation, Forbes reported that each of the 30 big-league clubs is valued at an average of $1.9 billion.

As for the union representing current players, the Major League Baseball Players Association (MLBPA) has been loath to divvy up anymore of the collective pie. MLBPA Executive Director Tony Clark has never commented about these non-vested retirees, many of whom are filing for bankruptcy at advanced ages, having banks foreclose on their homes and are so sickly and poor that they cannot afford adequate health care coverage.

In my opinion, the retired boys of summer-like Boles are being shortchanged by a sport that can afford to do more for them. Just increase the bone that is being thrown these men to $10,000 a year. Are MLB Commissioner Rob Manfred and Clark suggesting they can’t afford to pay these men more?

Listen, nobody begrudges anyone their money. But if it weren’t for the old-timers, who walked the picket lines, endured labor stoppages, and went without paychecks so free agency could occur in the first place, do you think Franco gets the lucrative payday he just signed?

He was a Giant? Carl Boles and the Case of the Mistaken Identity

Douglas J. Gladstone is the author of “A Bitter Cup of Coffee; How MLB & The Players Association Threw 874 Retirees a Curve.”