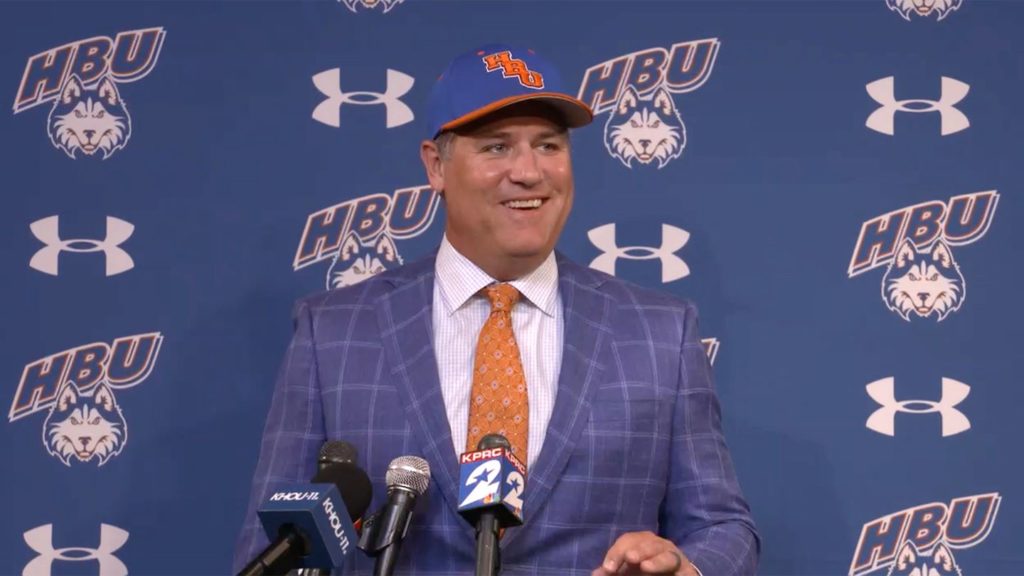 HOUSTON – HBU has hired Lance Berkman as the fifth head coach in the program’s history, Director of Athletics Steve Moniaci announced at a press conference on campus Monday.

“We really do think with this hire we have elevated not just the baseball program, but the whole athletic department,” Moniaci said. “Certainly, we have always had what was known around town as a pretty good baseball team, but we want to get beyond that. We want to establish a program that is known regionally and then nationally. With Lance’s help and some others we think are going to come along shortly, we think we can get there, but it all starts with the person who is in charge of that program and the person who is going to be in charge of our baseball program for a long, long time – I hope – is Lance Berkman.”

“I want to say thank you to Steve and Dr. Sloan for the opportunity,” Berkman said. “This is something I’ve wanted to do for a long time, even before I retired from playing baseball. I knew that I wanted to coach and, for me, there’s no better level than Division I college baseball. It’s really the last highest level where guys play for the name on the front of the jersey, not the name on the back. When you get in front of kids at this time of their life, you can really influence them for the good, which is a big part of the reason I wanted to be in coaching. This is kind of a dream come true for me and I’m just so grateful for the opportunity.

“HBU is a great place. It’s an underrated and underappreciated university. It’s a place where they combine faith and education, which are critically important to the development of young men.”

Berkman played 15 seasons in Major League Baseball, 12 with the Houston Astros, two with the St. Louis Cardinals, and one each with the New York Yankees and Texas Rangers. He was a career .293 hitter with 366 home runs, 422 doubles, 30 triples, 1,234 RBIs, and 1,146 runs, who made the All-Star Game six times. Berkman was named National League Comeback Player of the Year and won the World Series with the Cardinals in 2011. He was inducted into the Astros Hall of Fame in 2020.

The 1997 NCBWA National Collegiate Player of the Year at Rice, Berkman hit .431 with 41 home runs, 134 RBIs, and 109 runs to lead the Owls to their first College World Series appearance. He hit .385 for his collegiate career with 67 homers and 272 RBIs to earn All-America honors twice, was elected to the Rice Hall of Fame in 2005 and the College Baseball Hall of Fame in 2015. Berkman was selected in the first round with the 16th overall selection by the Astros in the 1999 draft.

Since retiring from Major League Baseball in 2013, Berkman spent four seasons as the head coach at Second Baptist High School, guiding the Eagles to the TAPPS 4A state championship in 2016. Most recently, he was an assistant coach at the University of St. Thomas, where the Celts went 17-16 in only the second season of the program’s existence.

Berkman was born in Waco but was a standout at Canyon High School in New Braunfels, where he hit .539 with eight home runs as a senior. He and his wife, Cara, have four daughters.

Berkman takes over the HBU program from Jared Moon, who led the Huskies to three conference championships, an NAIA World Series appearance in 2007, an NCAA Regional appearance in 2015, and finished his career as HBU’s all-time leader with 401 wins in 16 seasons at the helm of his alma mater.