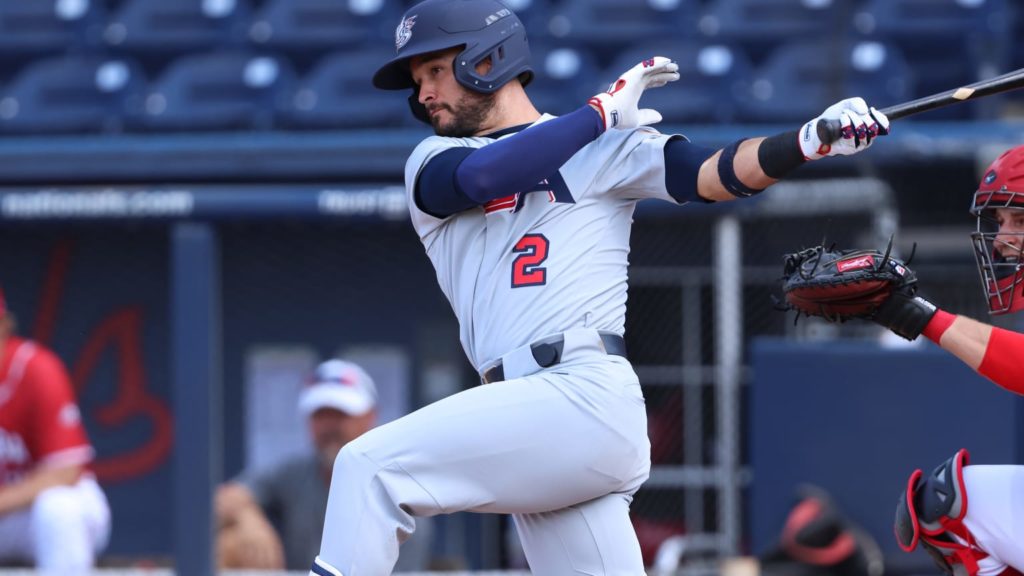 WEST PALM BEACH, Fla. – The USA Baseball Professional National Team punched its ticket to the Super Round of the 2021 World Baseball Softball Confederation (WBSC) Baseball Americas Qualification Event with its second-straight win–an 8-6 victory over the Dominican Republic at The Ballpark of the Palm Beaches Tuesday evening.

After turning in a complete domination of Nicaragua to lead from start to finish in their opening game of the tournament Monday, Team USA had to battle back from a fifth-inning deficit this time. Luke Williams tripled home a pair of key runs as part of a four-run, sixth-inning rally and finished with his second multi-hit effort in as many games, while Eddy Alvarez delivered a pair of doubles to help pace the U.S. attack.

Trailing by a run after the Dominican Republic rallied to wipe out a 4-1 deficit, Team USA scored four times in the sixth to turn the tide for good. Logan Forsythe’s pinch-single plated the tying run, and Nick Allen put the U.S. in front to stay with a fielder’s choice grounder to third.

Williams drove 1-0 pitch into the right-center field gap to bring in two more runs and give Team USA an 8-5 lead. The Philadelphia Phillies farmhand finished the night 2-for-5 after logging three hits in Monday’s 7-1 win over Nicaragua.

From there, the U.S. bullpen held the opposition at bay, with the Dominican Republic’s lone hit of the final three frames coming on Juan Francisco’s leadoff homer in the ninth.

The U.S. clicked in the clutch all night long, scoring six of its eight runs with two outs. That trend started in the first inning, as Team USA used a two-out, Todd Frazier double to spark an early rally. Eric Filia drew a walk from Radhames Liz before Triston Casas lined a 3-2 pitch to center to chase home both U.S. baserunners for a 2-0 advantage.

Joe Ryan was nearly flawless on the mound in the early stages of the contest, striking out six of the first eight Dominican Republic hitters of the game.

His lone hiccup came with one out in the second when Francisco got ahold of a 3-1 offering a lifted it over the wall in right to cut the U.S. lead in half.

The U.S. added to its advantage in the bottom of the fourth, thanks in large part to an epic 15-pitch battle between Liz and Alvarez that included seven-straight foul balls with the count deadlocked at 2-2. Alvarez won the matchup, lining a full-count offering to deep left-center before Mark Kolozsvary launched a two-run homer to left–his second home run in as many games at the AOQ–to make it a 4-1 game.

Ryan continued to tear through the Dominican Republic batting order, punching out the first two hitters of the fifth for his ninth and 10th strikeouts of the game. But Luis Liberato worked a walk, and Gustavo Nunez doubled, setting up Emilio Bonafacio’s two-run triple that trimmed the Team USA lead to one run.

The Dominican Republic kept the pressure on Team USA in the sixth, as Juan Rodriguez led off with a base hit before Diego Goris drove a Trevor Lane (1-0) pitch deep to left for the go-ahead two-run homer.

The U.S. responded immediately, as Casas’s one-out single in the bottom of the inning ignited Team USA’s offense and the decisive rally of the night. Alvarez was hit by a two-strike offering and Kolozsvary walked on four pitches to set up Forsythe’s key single.

Ryan completed 4 2/3 innings, scattering four hits and fanning 10 batters. Casas logged two hits, while Kolozsvary drove in a pair of runs and reached base safely in three trips to the plate.

With the victory and its advancement to the Super Round, Team USA drew one step closer to earning one of the final two berths in the upcoming Olympic Games in Tokyo. In order to qualify for the Olympics from the Baseball Americas Qualifier (AOQ), the U.S. will need to win the tournament. If the U.S. does not qualify for the Olympic Games at the AOQ but finishes second or third, they will participate in the Final Qualifier that will take place in Puebla, Mexico from June 22-27.