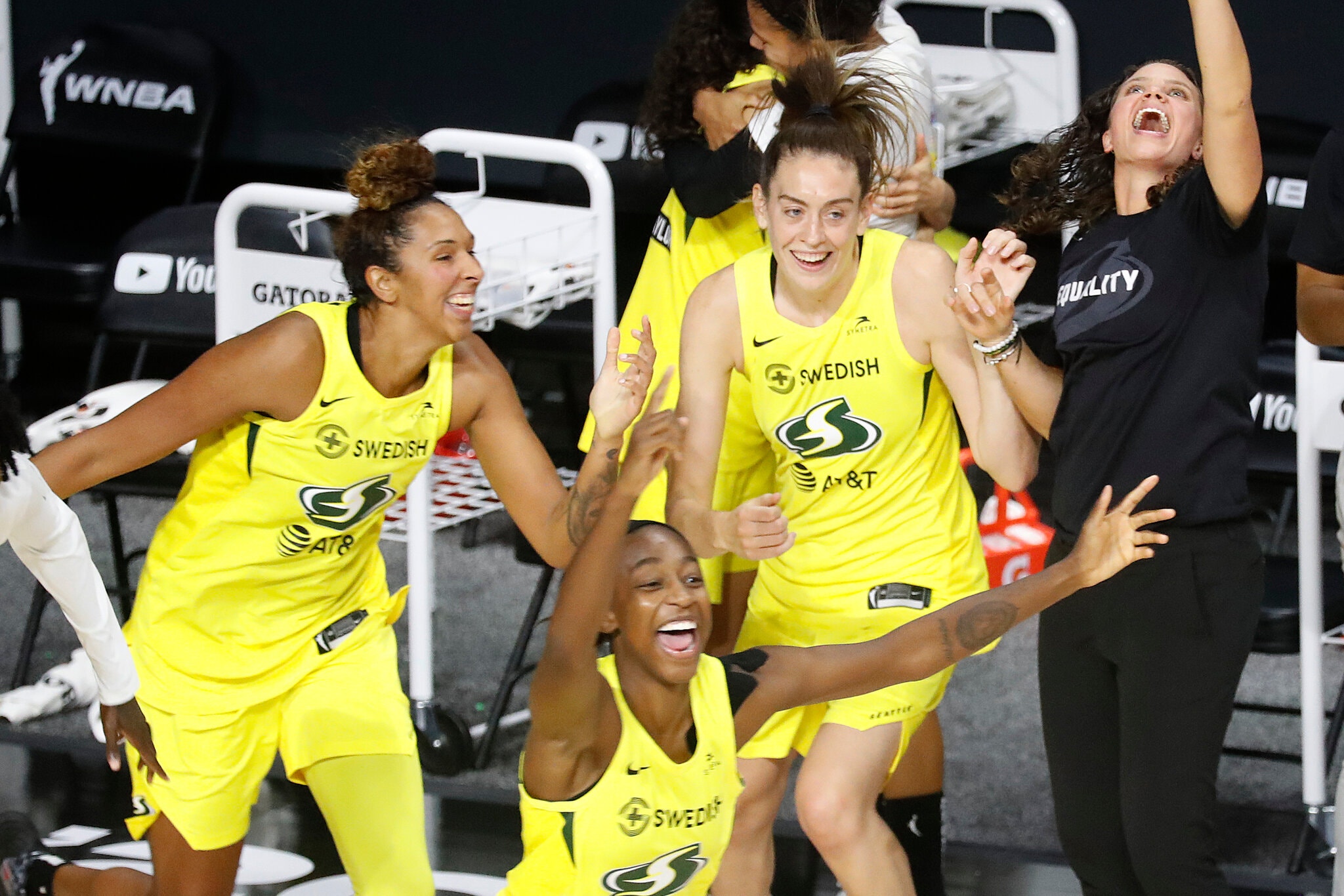 The Seattle Storm etched their names into the WNBA record books on Tuesday night.

Behind Breanna Stewart, Sue Bird, and the rest of the ‘Emerald City Sisterhood,’ the Storm folded the Las Vegas Aces in Game 3 of the 2020 WNBA Finals, 92-59. Ouch, babe. Doing so with their proverbial brooms, Seattle completed a dominating 3-0 sweep of Las Vegas inside the COVID-19 capable ‘Wubble’ at the IMG Academy in Bradenton, FL.

Winning WNBA Finals MVP honors in 2018, Stewart duplicated her efforts this season with not only her second title but her second Finals MVP trophy as well. The first pick in the 2016 WNBA Draft out of Geno Auriemma’s prestigious UConn Huskies’ program, you could say that Breanna was born to win championships. During her collegiate career in Storrs, CT, Stewart left with an astonishing four NCAA Women’s Basketball Tournament titles (2013-16). Wow.

While you’re letting that distinction soak into your brain, I’m not done yet. Additionally, Stewart earned MOP (Most Outstanding Player) honors (2013-16) for every single one of UConn’s runs to NCAA Women’s Basketball championship glory. That’s not all, my friends. During the 2016 Olympics in Rio de Janeiro, Breanna helped lead Team USA to a gold medal. Unbelievable.

Fittingly, Breanna Stewart reigned supreme while the Storm donned the name Breonna Taylor on their uniforms. In fact, the entire WNBA season was dedicated to Taylor as well as the Say Her Name campaign — a crusade raising awareness of Black women who were victims of racial injustice and police brutality.

Before the tip of the opening game beginning the 2020 WNBA season, Layshia Clarendon of the New York Liberty and Stewart of the Storm took the floor to talk about the initiative. Stewart and Clarendon are leaders of the league’s new Social Justice Council.

“We are dedicating this season to Breonna Taylor, an outstanding EMT who was murdered in her home,” said Clarendon. “Breonna Taylor was dedicated and committed to uplifting everyone around her.”

“We are also dedicating this season to Say Her Name campaign,” she continued, “a campaign committed to saying the names and fighting for justice for Black women, Black women who are so often forgotten in this fight for justice, who do not have people marching in the streets for them. We will say her name.”

Although Stewart led the charge for Seattle, the ageless Sue Bird & Co. performed at the highest level alongside the superstar. Yet another UConn Huskies’ great, Bird turns 40 on October 16th. How about a few more parallels that can be drawn between Stewart and Bird? Sue won two NCAA titles with UConn in 2000 and 2002 and was selected No. 1-overall in the 2002 draft. However, unlike Breanna, Bird had a role in all four of the Storm’s titles.

How it started How it’s going pic.twitter.com/1lqwzLxalX

Winning one gold medal in the Olympics is one thing, but four gold medals is in a galaxy all by itself. A world women’s basketball juggernaut, the United States with Bird on their wing conquered in 2004 (Athens), 2008 (Beijing), 2012 (London), and 2016 (Rio de Janeiro).

After completing her 19th season in the WNBA, will Sue Bird return for her 20th? It’s up in the air, but it’s most definitely a possibility. Meanwhile, after smokin’ the Aces, the Seattle Storm bask in the limelight of their fourth WNBA title.