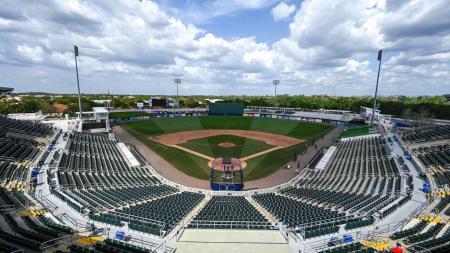 The last week in MLB was about spring training being suspended and delaying the start of the regular season, a starting pitcher in the American League has been shut down, and a team in the National League is working on an extension with a catcher.

The entire world has had their everyday lives impacted by coronavirus pandemic.

The virus has forced many professional leagues to take action.

BREAKING: the NCAA Tournament has been canceled. pic.twitter.com/UylHVHcNyp

The National Basketball Association was the first league to suspend their season when a player tested positive for COVID-19, per Sports Illustrated.

The NBA has suspended the season until further notice pic.twitter.com/3g5PJFYqBl

Major League Baseball, a couple of days ago provided a statement which said Spring Training games would be suspended, the start of the regular season would be delayed by at least two weeks and postponed the 2020 World Baseball Classic qualifying games.

The minor league baseball season has also been delayed due to the virus, per Minor League Baseball.

MLB announced a couple of days ago that Spring Training camps will be suspended, major league players had the option to return home, remain in their Spring Training cities, or return to their club’s home city, per Joel Sherman of the New York Post.

2/or return to their Club’s home city. This step is in the best interests of players, employees and the communities who host Spring Training. MLB will continue to monitor ongoing events and undertake the precautions and best practices recommended by public health experts.

MLB sent out a memo to clubs yesterday, with a recommendation that clubs should avoid all activities in which players congregate in significant numbers or are otherwise unable to practice, per Sherman.

2/the “social distancing” protocols recommended by the CDC. The risk of a player in a Club facility contracting the virus is real, and we must implement protocols to protect the safety and well-being of our players and staff members. In addition, we must recognize that

A reason why the memo was sent out is that a minor league player in the New York Yankees system tested positive for coronavirus, per Jeff Passan of ESPN.

A minor league player in the New York Yankees system has tested positive for coronavirus, sources tell ESPN. He is the first known case in baseball. He was quarantined Friday morning after saying he was running a fever.

MLB had to suspend Spring Training and delay the start of the season as a way to protect players and fans.

The league mentioned the season being delayed by at least two weeks, but it will be much longer than the given timeframe before we can think of baseball happening again.

It will be several months until coronavirus is gone, and when that happens, players will need to start Spring Training again.

The loss of baseball for an unknown amount of time is monumental, but the safety of our families and friends is more important.

Justin Verlander has a “mild lat strain,” general manager James Click said. He has been shut down.

The Astros didn’t provide a timeline of when they expect Verlander to return.

Verlander dealing with an injury is weird, as he’s been one of the most durable starting pitchers in recent memory, as he’s thrown at least 200 innings in 12 different years.

A lat strain is a type of injury in which a pitcher can recover in a couple of weeks or months. It varies for everyone.

The best course of action the Astros can take is to allow Verlander to rest the injury.

The St. Louis Cardinals are working on an extension with catcher Yadier Molina, per Mark Saxon of The Athletic.

The last elite #STLCards catching prospect got traded. So… https://t.co/K1fccmWZat

Molina has said he prefers to either remain with the Cardinals or retire.

The extension would cover the 2021 season and probably the 2022 season as well.

Molina has spent his entire 16-year career with the Cardinals and is coming off a strong 2019 season.

Molina has had a Hall-of-Fame worthy career, and it would be nice if he could retire as a member of the Cardinals.