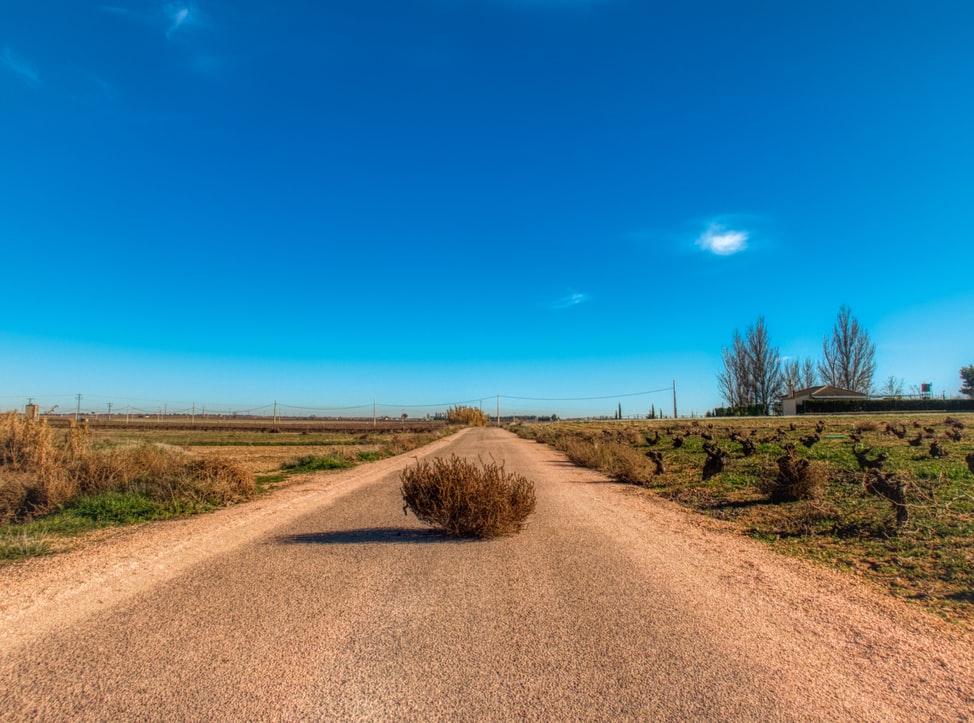 Rolling on through Idaho, Belichick, Kraft, and Goodell keep up their social distancing.

Belichick drives, Kraft gets germs on his hands from the cheeseburger wrappers, and Goodell talks on the phone.

“What, you said they canceled the NFL’s annual meeting?” he asks Jerry Jones.

True. But that’s only because no other sports reporters are working right now because no sports are being played anywhere in the world.

“Well I’m glad the meeting was canceled,” said Roger. “I hate that meeting because I have to suck up every year to jerks like you, Jerry, and you, Robby Kraft.”

“Hey,” said Belichick. “I see somebody along the side of the road by the tumbleweeds.”

Ricky amid the tumbleweeds

“Looks like Ricky Williams,” said Goodell. “He’s the only guy I know in the history of the NFL who was in the middle of a good career and then publicly announced he wanted to quit so he could smoke more weed. I mean, a lot of guys have done that. But what made Ricky special is he announced that. He wanted everybody to know he wanted to go smoke weed rather than play football. For that, Ricky has always been in my mind a standup guy.”

There Ricky was, looking all relaxed, standing there with no real purpose. In a white toga and sandals, he was hanging out

“Hey Ricky, what are you doing in the middle of nowhere Idaho on the side of the road?”

“It’s just where I ended up but not really sure how and who really knows?” said Ricky. “A few years ago I quit football, went to the other side of the world somewhere, lived in a hut the size of a matchbox, started doing daily meditation and yoga, and smoked weed all day. I am still smoking weed all day.”

“That’s great, Ricky,” said Belichick. “We could use some weed ourselves. Have you heard about this coronavirus?”

“I have,” said Ricky. “I read all about it on the Sammy Sportface Baby Boomer Brotherhood Blog. He’s a sports blogger and medical expert – astounding skill set. They say there is no vaccine. But they’re wrong. The vaccine is pot. If you smoke enough pot, you won’t care if you have the virus. In fact, you won’t know where you are nor what the hell is going on. Weed will solve this global crisis.”

“Get in, Ricky,” said Belichick. “Your take on this crisis is the most uplifting news since the pandemic broke out this week.”

Ricky gets in the shotgun seat. He starts rolling a joint. He takes a big inhale, then offers it to Kraft in the seat behind him.

“I can’t do that,” said Kraft. “Your lips were on that joint. We can’t be spreading germs to each other. You might have the virus, Ricky. And if I put my lips on that joint I might get the virus.”

“True,” said Ricky. “But if you take a hit off that joint, you will get high and won’t care if you have the virus. That’s what pot does. It makes you not care about anything. All your worries will go away.”

“Give me that joint,” said Kraft.

He takes a big hit. He thinks about the fact that he’s in his 70s and at a high risk of getting really sick if he contracts the coronavirus. But as the pot seeps into his system a few seconds later and starts to cloud his mind, he thinks about how little he cares about anything and wonders why he ever did.

“Hey Ricky, are you aware that we’re practicing social distancing in this car so we don’t give each other germs? “That’s why we’re sitting in different parts of the car.”

“Whose high idea was that?” asked Ricky.

“Give me that joint,” said Belichick. “I need to get high to deal with this situation. I mean, how absurd can this get? We just picked up Ricky Williams on a random highway in Idaho. He’s famous for being the biggest weed-lover in the history of professional sports. We’re driving to get a quarterback I don’t even want. We work for a league that is not holding its meeting this year. The world is in lockdown. And I’m going to get high with my boss and his boss riding through Nowhere America.”

“You’re overthinking this, Bill,” said Ricky. “Just take a hit and everything will be fine. You won’t care about social distancing after a few minutes. You won’t care about germs, washing your hands, Tom Brady, or anything else you have ever cared about. You need to not care, Bill. The pot will make you not care.”

Bill takes a deep hit. He blows the smoke out of his mouth and watches it closely as it floats around near the front windshield. He starts to imagine the smoke he is looking at is some sort of ghost.

“I see a ghost,” he said. “See it, Ricky. The smoke I inhaled in my lungs and blew out now looks like a ghost.”

“Of course I see it, Bill,” Ricky said. “I see ghosts every time I get high.”

Meanwhile, Roger Goodell is feeling left out of the conversation the other three men in the car have been having. Over the past fifteen minutes, he heard them talking about the Idaho Rain Forest, Idaho’s population statistics, Idaho’s unusual shape, Idaho’s tumbleweeds, the number of people who smoke weed in Idaho, Mike Vrabel, Miles Standish, and Ocho Cinco.

“Give me that joint,” said Roger. “I need to get to whatever place you guys have gone.”

Roger takes a hit. “I don’t care if your germs on this joint. I need to get high.”

He takes a hit.

The car is quiet for a few minutes. The three guys in the front of the car are thinking different things, none of which make sense to themselves. They’re lost.

But none of them care in the slightest what they are thinking about. It’s all just happening to them, and they’re just experiencing something together and yet totally separately.

“Hey Bill,” said Goodell, “I think I’m social distancing. Is that the same thing as getting high?”