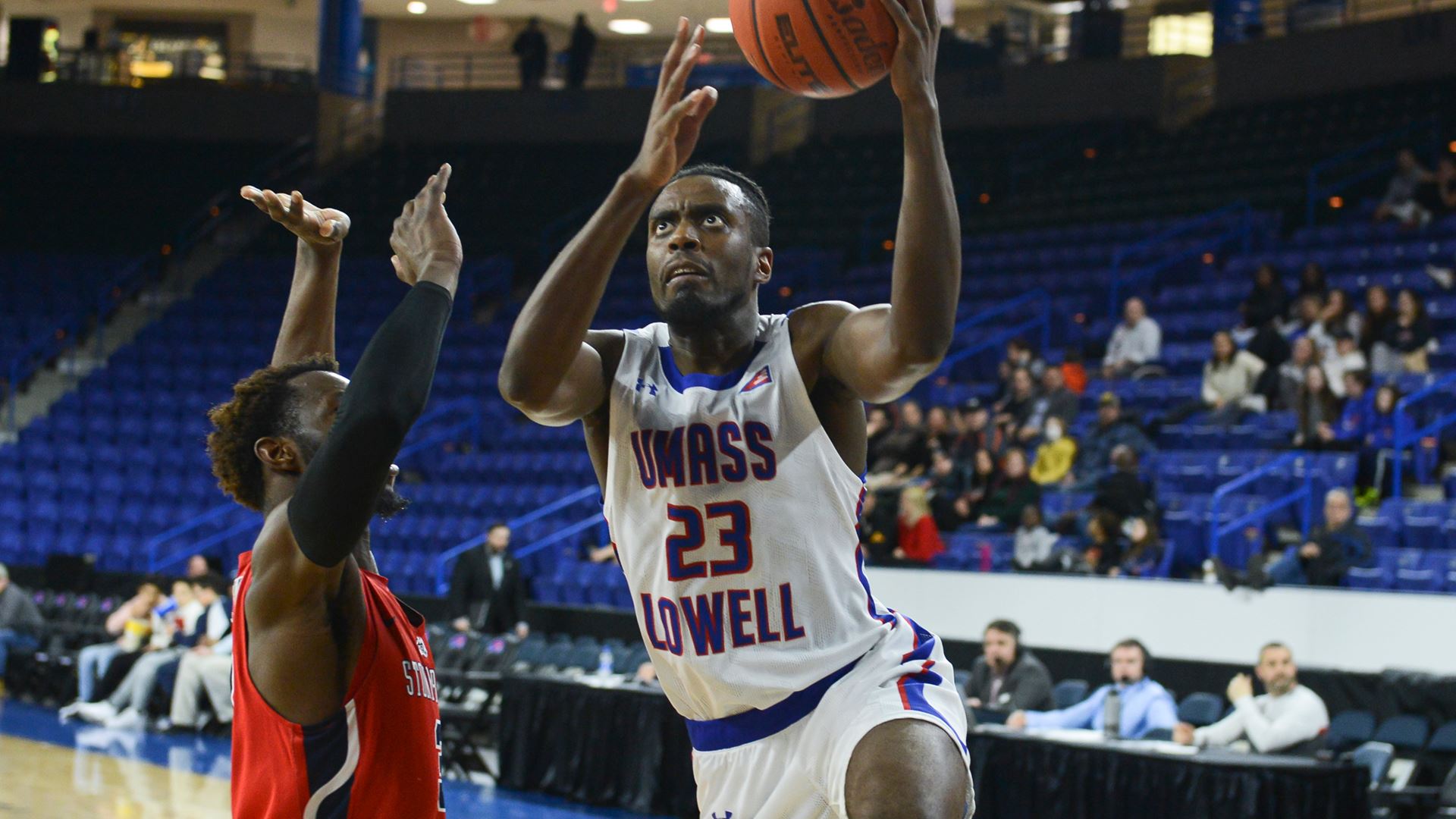 In what River Hawks head coach Pat Duquette called “the toughest stretch for me here at Lowell,” the River Hawks jumped out fast, but could not keep it going. The lack of depth and too much size from Stony Brook (5-2 in AE, 14-8 overall) helped the Seawolves to an 84-76 road win over UMass Lowell (2-6 in the league, 8-14 overall). Wednesday night’s game featured 12 lead changes and six ties. Most of those lead changes occurred in the second half which was more of a back and forth affair. The stat of the night was the bench line. Stony Brook outscored the River Hawks bench 30-0. The lack of depth on the UMass Lowell bench has become a major problem. As the coach said, “we need production from the whole team.” On Wednesday night, it was there from the starters but it did not come from the bench.

The River Hawks jumped out to a ten-point lead at 17-7. Freshman Connor Withers had five of those points on the way to a 14 point, seven-rebound night that included two hard falls on the defensive end of the court. The next time down the court for UMass Lowell, Josh Gantz converted a layup in the lane to give his team a 12 point advantage at 19-7 with 13:23 left in the first half. Gantz had nine on the night. The 12 point lead would be the biggest of the night for the River Hawks. Stony Brook’s size and depth began to turn the first half in their favor and they would take a one-point lead at 27-26 on a fast break layup by Andrew Garcia (18 points, eight rebounds). With six minutes left in the half, all the good work done by the River Hawks was gone. However, not for long, as Christian Lutete (27 points, eight boards, and eight straight 20+point games) scored six straight points to give his team the lead back at 34-31 with two minutes to play in the half. The Seawolves took the lead back and to the locker room thanks to five points from Elijah Olaniyi (13 points, seven boards) and Garcia with a layup in the paint. Stony Brook went to the halftime break with the lead at 39-36.

The second half saw the River Hawks compete early on and they tied the game at 42-42 on an Obadiah Noel jumper in the paint. He had 20 points and nine rebounds on the night. Lowell took a brief three-point lead at 48-45. Stony Brook tied the game at 48-48 on a three-pointer by Makale Foreman (19 points) with thirteen minutes left. Both teams started over again. It was from that point that Stony Brook’s size and depth took the game over. A 10-0 run, with Olaniyi and Foreman doing the damage gave them a 58-48 advantage. Over the final eight minutes of the game, Lowell did everything they could to get back in the game. They cut the lead to four at 59-55 on a Ron Mitchell short jumper in the paint. They would tie the game on a Withers three-ball from the top of the key and take the lead on two free throws from Mitchell at 63-61 with five to play. But Foreman got a kind bounce off the rim for a three to give his team the lead back at 64-63 with 4:43 to go. Then Miles Latimer hit back to back three-point shots (17 points on the night, 6-for-6 from the foul line, 3-of-4 from deep) with 3:10 left Stony Brook by five at 70-65.

Those three’s from Latimer broke the back of the River Hawks. Stony Brook was able to finish out the game and improved their road record in conference play to 3-1. The final score from Tsongas Center was Stony Brook 84 UMass Lowell 76.

Starting on Wednesday night, the River Hawks end their season by playing six of their final ten games at home. Their position in the standing does not give them much wiggle room. Heading into Wednesday night, they were only one game ahead of both Binghamton and Maine to stay out of last place. They need wins if playing in March is in the River Hawks future. Saturday afternoon they will try to get a winning streak started as they host the New Hampshire Wildcats at 5:30 PM.