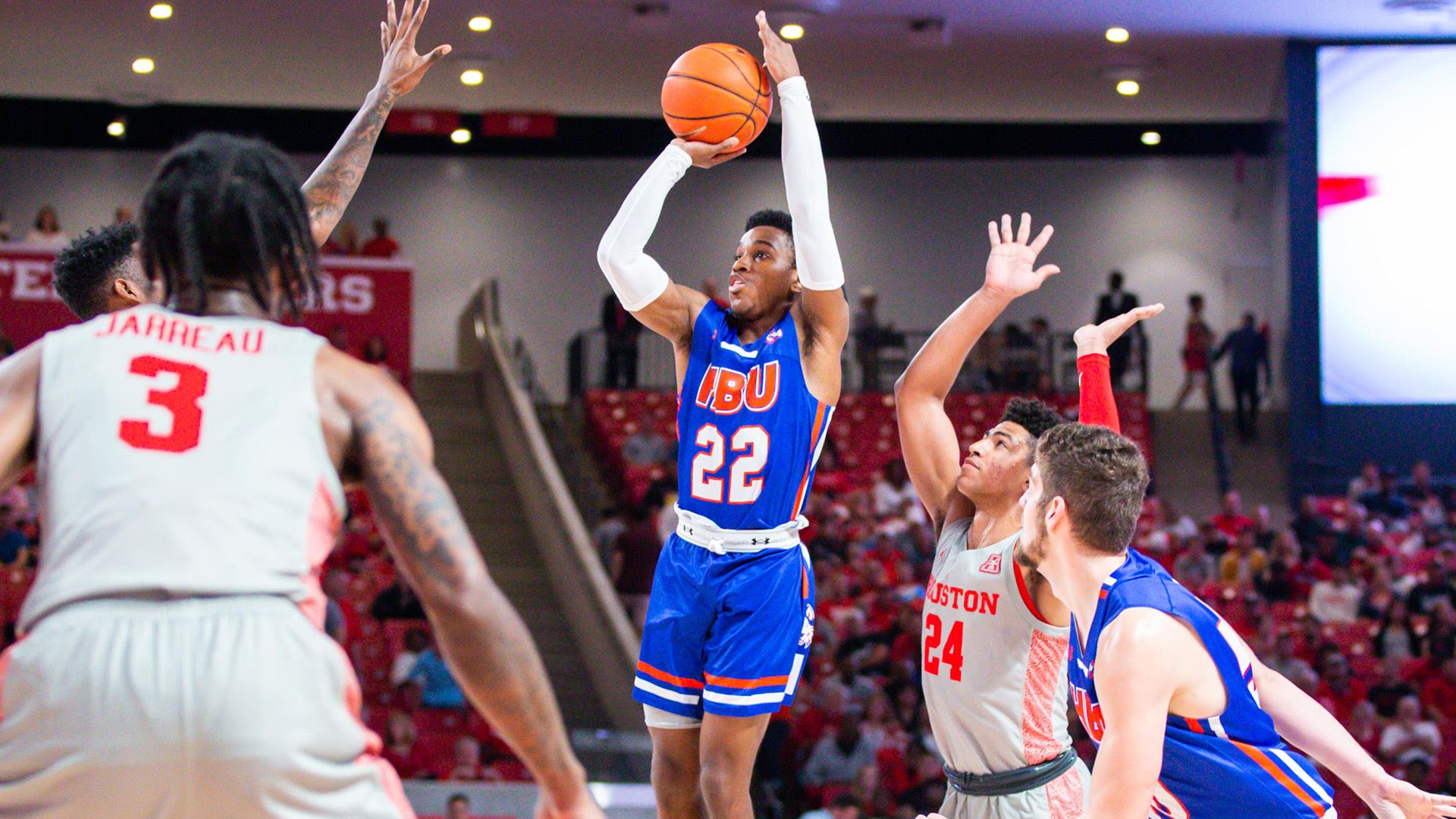 HOUSTON – Myles Pierre and Benjamin Uloko set new career-highs in scoring and five Huskies scored at least 15 points but HBU dropped a tightly contested matchup to visiting New Orleans inside Sharp Gym on Wednesday evening by a score of 106-98.

For the second-straight game, Uloko set a new career-best in scoring as the sophomore connected on 7-of-13 from the floor and 6-of-9 from the charity stripe for 20 points after scoring 17 in the Huskies’ (1-13, 1-4 SLC) last game. Over the course of the last two games, the sophomore has raised his scoring average from 3.4 points per game to 6.4 ppg. He also pulled down seven rebounds and was credited with a career-high three assists.

Pierre, meanwhile, made a return to the starting lineup and finished with 19 points on a near-perfect 8-of-9 shooting night. The freshman was 1-of-2 from deep and 2-of-3 from the line. Junior Ian DuBose finished with his third double-double of the season with 15 points and 11 rebounds. He missed out on a triple-double by two assists, dishing out eight dimes and blocking a pair of shots. Sophomore guard Qon Murphy added 12 points off the bench.

Senior Jalon Gates matched Uloko for the team-high in scoring with 20 points, knocking down 4-of-8 from behind the arc. His fourth three of the night gave him 198 for his career and moved him into third on the program’s all-time made three-pointers list.

The Huskies took an early 11-5 lead but the Privateers (6-11, 2-5 SLC) came back to lead 19-16 at the 13:39 mark in the first half. HBU answered with the game’s next five points over the course of a minute of game time to lead 21-19 after a Ryan Gomes layup. New Orleans then went on a 20-0 run over the course of the next four minutes for a 39-21 advantage with just over eight minutes left in the half. The UNO lead got as high as 19 on their next possession after a Raquan Brown three. From there, HBU was able to close the gap and head into the locker room trailing 52-44.

In the second half, after New Orleans got a free throw on its first possession, Uloko made a layup and DuBose knocked down a trey to quickly to bring it to 53-49 less than a minute and a half in. The Huskies pulled within four multiple times and then got within two after a Pierre layup with 15:51 to go. UNO then twice pushed its lead back to five but a pair of free throws and a Gates three at the 13:50 mark evened the score at 64-64.

A minute later Troy Green hit a jumper to give the Privateers a four-point lead before Pierre scored a bucket in the paint and Gates stole the inbound pass and immediately knocked down a three to give the Huskies a 71-70 advantage, their first lead since the 12:38 mark in the first half. A 9-3 UNO run capped by back-to-back Green baskets again made it a six-point game but HBU again had an answer with DuBose and Gates connecting on consecutive threes to make it 80-80.

The Huskies were able to even the score multiple times until Pierre nailed a three from the corner with 4:12 on the clock that gave the Huskies a 93-90 lead. A technical foul was issued to Pierre following the shot and from there the Privateers went on an eight-point run to take a 98-93 lead with 2:19 to go. Murphy cut it to three on the ensuing possession but the Huskies went cold from the floor while UNO built its lead to put the game out of reach.

HBU out-shot New Orleans 54.8 percent to 52.8 percent but the Privateers attempted 10 more shots as a result of a 16-8 turnover differential in UNO’s favor. The Huskies held a 38-36 advantage on the boards and shot 50 percent (9-of-18) from three for the team’s best three-point shooting performance of the season.

HBU closes its three-game homestand this Saturday, Jan. 18, against Sam Houston State at 7:00 p.m. as part of a staggered double-header with the women’s basketball team facing the Bearkats at 2:00 p.m.