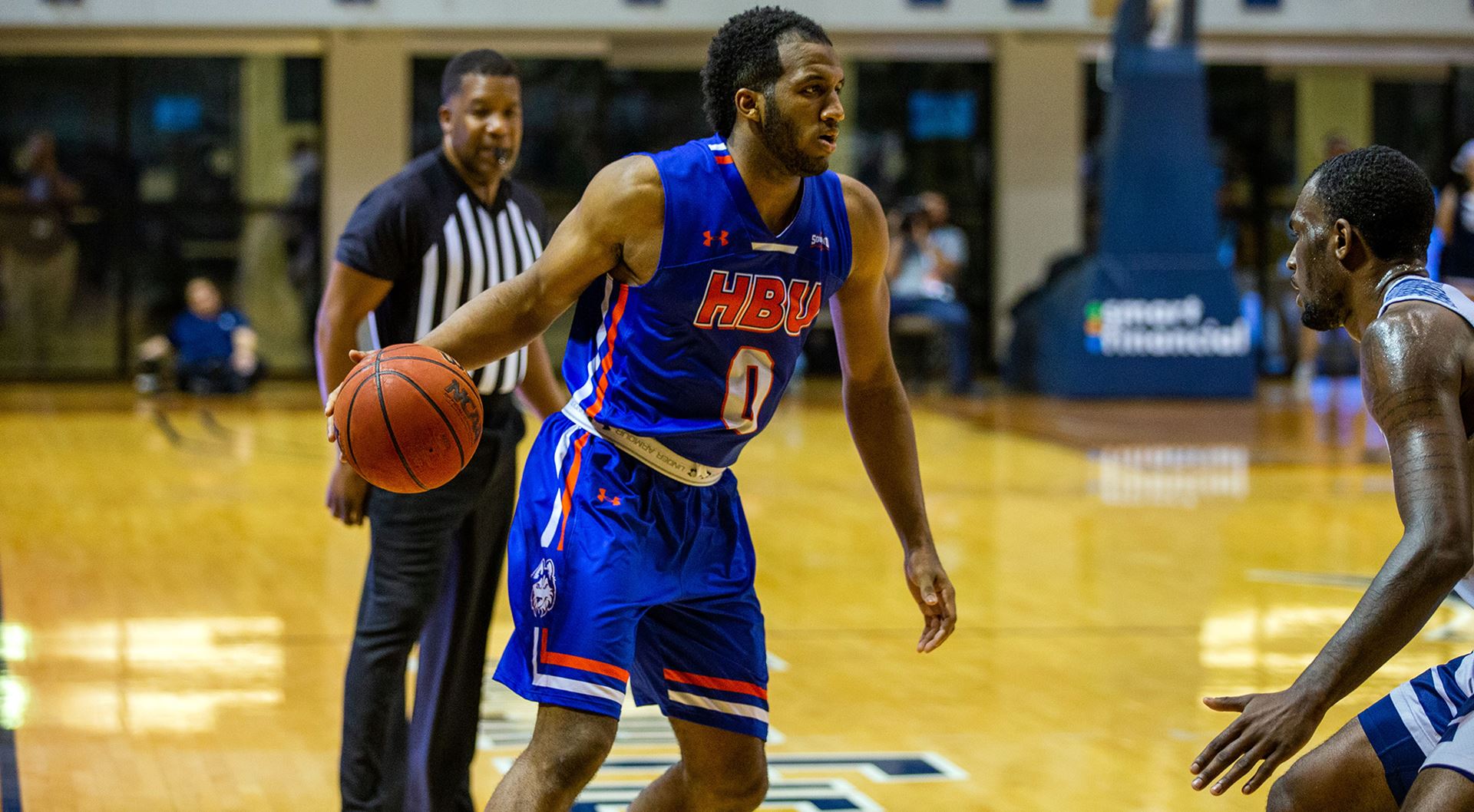 DuBose, whose previous career-high was 33, poured in the most points by a SLC player this season with his 44-point effort which he combined with 11 rebounds for a double-double while also nabbing four steals and dishing out four assists. The junior was 15-of-23 from the floor, 12-of-16 from the charity stripe, and 2-of-7 from behind the arc. He now leads the conference in scoring at 19 points per game. Additionally, he brought his career point total to 1,105 which places him 24th on the program’s all-time scoring list.

The Bears pushed their lead as high as 15 points in the first half after Jaxson Baker scored five-straight points for a 28-13 lead with more than 10 minutes left in the period. HBU then bounced back, using a 19-6 run that was capped by a Dalton layup to trail by just two, 34-32, less than four minutes later. The Huskies managed to get within one after a pair of DuBose free throws but UCA came back with the next six points and held the Huskies off the rest of the half, leading 51-44 at the break.

HBU was again able to cut its deficit to one thanks to a Myles Pierre layup at the 14:17 mark but a 9-2 UCA run put the Bears back ahead by eight, 68-60. That was the biggest lead the Bears could build in the second half with the Huskies remaining within striking distance. Collin Cooper’s second three of the night at the 5:42 mark put the Bears up 85-78 and HBU’s deficit remained at least three until Pierre knocked down a pair of free throws with 2:50 on the clock to get the Huskies within two.

Koval then answered with a three one minute later before DuBose answered with a trey of his own with 1:35 left on the clock. On their next possession, DuBose found Dalton open on a quick break in transition for an easy layup to even the score at 92-92 with 1:10 to go. Rylan Bergersen then put Central Arkansas back ahead by two with 45 seconds left. For HBU, it was Philip McKenzie who came up with his only bucket of the night with 27 seconds to go, knocking down a close jumper to tie it back up.

The Bears got a chance to regain the lead with Bergersen going to the line to shoot two with less than three seconds left but the junior missed both with DuBose snagging the rebound, sending the game to overtime.

It seemed as though the Huskies might run away in overtime as they scored the first nine points, leading 103-94 with just 2:47 left on the clock, but UCA fought back with a 7-0 burst highlighted by five-straight points from DeAndre Jones in less than a minute of game time. Back-to-back buckets from DuBose and Jalon Gates pushed the lead back to six but free throws again pulled UCA to within two, 107-105, with less than a minute remaining. The Huskies made their free throws to close out the game and hold off the Bears.

Pierre scored a career-high 16 points on 5-of-10 shooting while also pulling down eight rebounds off the bench. Junior Ryan Gomes just missed out on a double-double with nine points and a career-best nine rebounds while also blocking a pair of shots. Gates ended the night with 15 points and Dalton added 11 to go along with five rebounds and four assists.

Koval posted a double-double for the Bears, ending the night with 23 points and 10 rebounds with four other players scoring in double-figures.

The Huskies travel to Natchitoches, La. on Sunday, Jan. 5, for a 4:00 p.m. tip against the Northwestern State Demons inside Prather Coliseum.