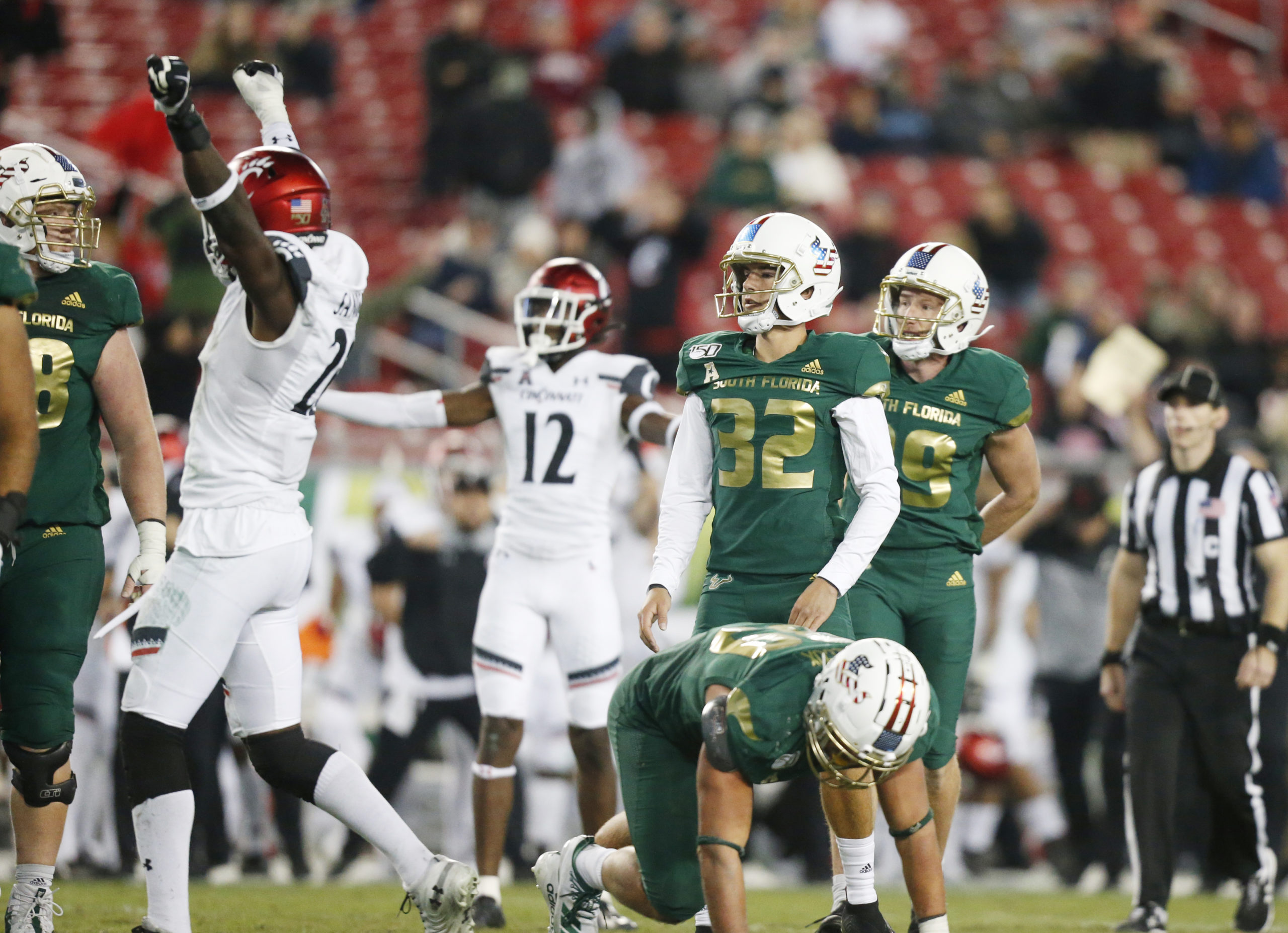 Under a cool crisp Saturday night, the Bulls played host to the 17th ranked Cincinnati Bearcats. This was one of the four American Athletic Conference games happening. This was Military Appreciation Night for the South Florida Bulls. The Bulls wore their US themed helmets which were white. The question coming in for Bulls fans was were they going to avoid being embarrassed. The last game they played under the lights, the Bulls got handily beat by the Temple Owls. Articles had come earlier in the week via the Tampa Bay Times that head coach Charlie Strong had not lost his locker room. Many fans questioned that because it seems their Bulls are playing uninspired football. Let’s see if the Bulls would come out and try to get what might be their biggest win. It would be a big upset if they could beat the Bearcats.

The South Florida Bulls won the toss but deferred to the second half. The Bearcats had a decent return and they would start on the 24-yard line. On the first offensive play, the Bearcats committed a false start penalty. The Bulls defense came up big and stopped the Bearcats with a sack. They came out of their opening drive by running the ball. They found rhythm by also mixing in the pass, none bigger than a 55-yard pass to Randall St. Felix. On the play, right after the long pass, they punched it in on a four-yard Trevon Sands carry and took an early 7-0 lead. South Florida special teams came up big. The Bearcats offense was out of sync early with multiple penalties. The Bulls defense came up big and didn’t allow the Bearcats outside the five-yard line. They started deep in Bearcat territory after they punted.

The Bulls featured the no-huddle offense. What looked like a sure touchdown was negated by an offensive pass interference penalty. The penalty cost the Bulls points as they attempted a field goal and it went wide right. The penalties continued for the Bearcats on offense, yet another false start penalty. The Bulls defense came up with another stop and forced the Bearcats to punt. The Bearcats defense kept the Bulls from moving the ball and they punted. Once again, another big play on special teams for the Bulls, a 60-yard punt. The Bearcats started to use their run game. The Bulls defense came up with a big stop and the Bulls took a 7-0 lead after one quarter.

With their defensive stop, the Bulls took advantage and kicked a field goal and took a 10-0 lead. The defense came up big with yet another sack. The Bearcats punted. The Bulls used the run on early downs and the pass to pick up first downs. The Bulls committed a false start penalty. That penalty costs them points again as they missed another field goal, this one was wide left. The Bearcats still were unable to find any rhythm on offense. The sacks continued for the Bulls defense. The Bearcats committed an offsides penalty. The Bulls were unable to get a first down and punted. The Bulls defense came big as caused a fumble. The only thing that went wrong for the Bulls in the first half is they missed three field goals but still led 10-0.

The Bulls received the second-half kickoff. To start the quarter the Bearcats defense came up with a stop and forced the Bulls to punt. The Bearcats ran with their quarterback to move the ball. They moved down the field by using the run game. With that, they cashed in on a one-yard touchdown run and cut the lead to 10-7. The Bulls started with a big pass play to Kelley Joiner for 49 yards. After the long pass, the Bulls went to the ground game. On a short pass play, tight end Mitchell Wilcox caught a touchdown pass and with that extended the Bulls lead to 17-7. The Bearcats had a good kick return to start their next drive. The ground game continued to be successful for the Bearcats. The Bulls defense stopped the run and forced the Bearcats to settle for just three points.

The USF lead WAS 17-10. They would start with a 10-yard holding penalty. The penalty cost them, and they punted. The defense committed an illegal substation penalty. The Bearcats used the no-huddle and run game as they moved down the field. With that, we headed to the final quarter with the Bulls leading 17-10.

Then, there was a big special teams play by the Bearcats as they slightly block the punt. The Bulls came up with a big stop and forced the Bearcats to punt and the defense bailed the Bulls out again. On back to back plays, the Bulls nearly had an interception. A big pass play for the Bulls for 41-yards got them out of their end. The passing game continued to work for the Bulls. They mixed in the run as well. Once again, the Bulls missed a field goal bringing the total to four. The Bearcats seemed to be going back as the game wound down. They busted out with 30-yard pass play and put themselves in place for a game-winning field goal which they converted to win the game 20-17.