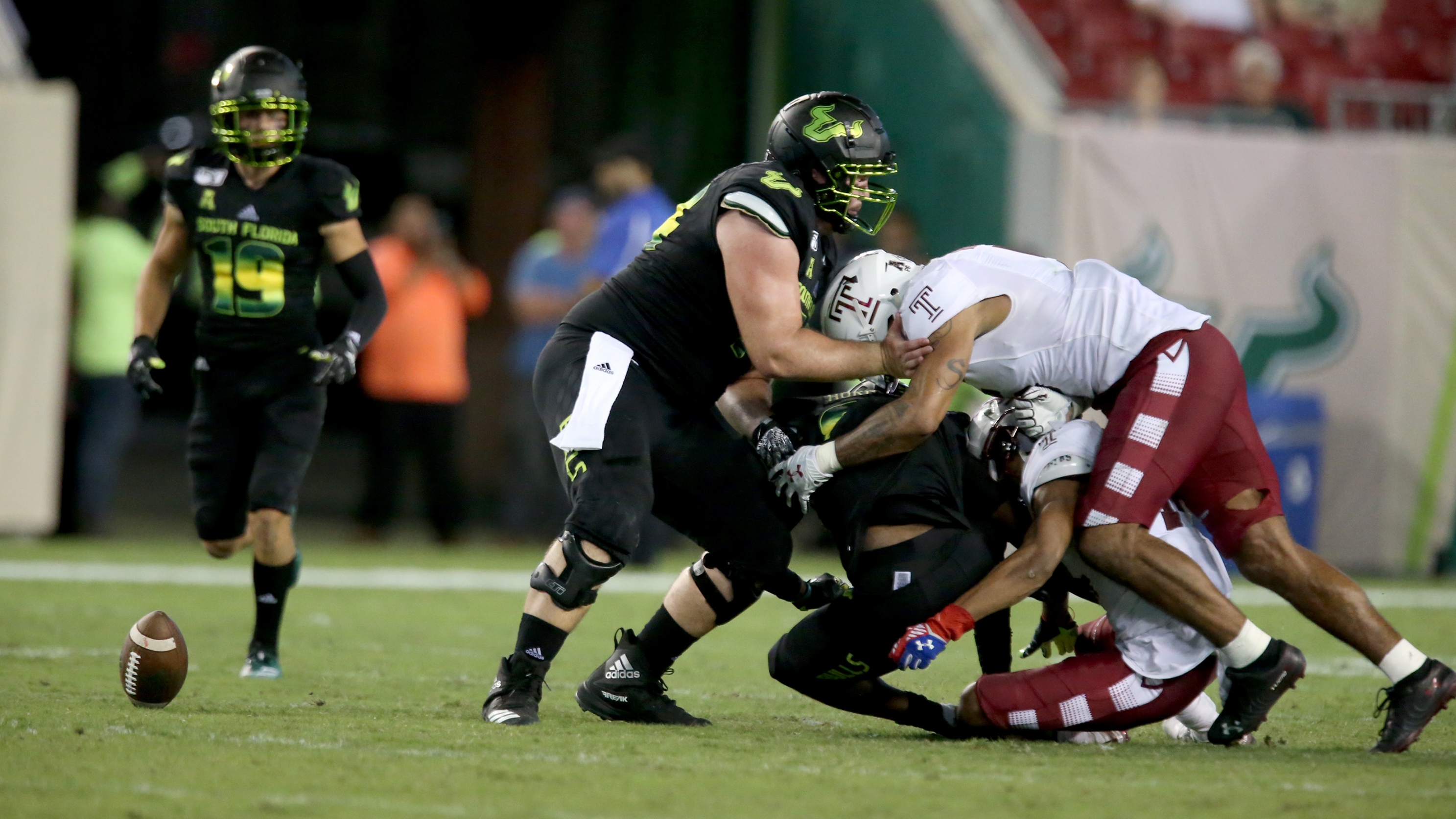 The South Florida Bulls returned home after their bye week. They were coming off a win over American Athletic Conference opponent, East Carolina Pirates. One of the cool parts about this game was it was on ESPN in front of a nation-wide audience. It was an 8 pm EST kickoff. They decided to go with their all-black uniforms. It was a cool way to start the game as paratroopers for the armed services descended to the field at Raymond James Stadium. The Bulls needed two wins to become bowl eligible. Many of the experts have this one of the remaining four they could win. The Bulls played a complete game against the Pirates and should use the momentum to defeat the Temple Owls. The Owls came in at 5-3 and just needed one more win to become bowl eligible. This game looked be a back and forth contest.

The Temple Owls won the toss but deferred to the second half. The USF Bulls downed the ball and they would start at their 25-yard line. The Bulls’ first play was a pass to tight end, Mitchell Wilcox. The drive would be short and on the last play was nearly an interception. But on the punt, the Owls committed a roughing the kicker giving the Bulls a first down. Two plays after the penalty, quarterback Jordan McCloud would be strip-sacked and the Temple Owls recovered the fumble. The Owls came out in the no-huddle offense. The Owls drove down, but the Bulls defense stood strong and stop them on a fourth and one near the goal line. The Bulls began the drive after the stop with a nice run. On the Bulls drive, there was a stoppage of play for a review of a targeting penalty.

Linebacker Chapelle Russell of Temple was penalized for targeting and was thrown out of the game. The drive would end on another sack by the Owls. The Bulls punted. The Owls would begin their second drive on the 14-yard line. It would be a short drive for the Owls and the Bulls defense came up big again. The Bulls began their next drive on the Temple 45-yard line. The Bulls drive would end as they failed on a 4 down and 5-yard conversation. The first quarter would end with the Owls having the ball. The score was tied at zero.

The Bulls defense stood up the Owls again. They ended the drive with a sack of Anthony Russo. The next Bulls drive started on the 27-yard line. The Bulls struggled on offense and punted again. The Owls next drive started at the 35-yard line. The Bulls defense once again made a stand and ended the Owls drive with a sack. The Bulls’ next drive began at the one-yard line. During the drive, yet another targeting penalty was reviewed. There was no targeting or unnecessary roughing penalty, so the Bulls punted. The Owls would begin their next drive on the 25-yard line. The Owls would change quarterbacks on their last drive now in the game was Todd Centeio. The biggest play of the Owls drive was 57-yard run. The drive would end on a touchdown pass and put the Owls ahead 7-0.

The Bulls next drive started at the 25-yard line. The drive would end inside Owls territory and the Bulls trailed 7-0. The half was not exciting as either team moved the ball outside of the 57-yard run by the Temple Owls. The Owls received the ball to begin the second half.

The Bulls hit another big pass play this time it was to Mitchell Wilcox for 25-yards. They used the pass for a touchdown pass to Bryce Miller on a 14-yard touchdown pass that narrowed the score to 14-7. The quarter would end with the Owls leading 14-7

The Owls took the victory formation and walked out of Raymond James Stadium with a 17-7 victory.