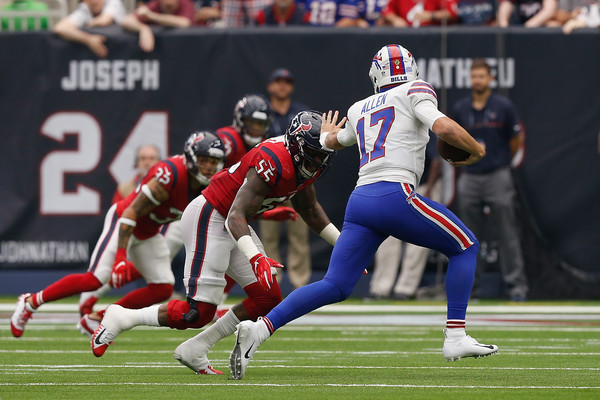 Share
Tweet
Share
Share
Email
Comments
There is a different quarterback in this week’s fantasy football start em and sit em. Bills quarterback Josh Allen has a possible matchup advantage this week.
1. Josh Allen- Quarterback- Buffalo Bills- Allen isn’t exactly the starting choice fantasy owners would typically expect to see. This is for the fantasy owners who don’t have Patrick Mahomes, Aaron Rodgers, or another top-seven quarterback. Owners that have a starter ranked between eighth and 12th best quarterback should take a chance on Allen. He goes against the underperforming Cleveland Browns and this could be the day he puts up monster stats. The Browns defense could be on the field for a while if the offense continues to struggle.
My Projection: 302 Passing Yards, three passing touchdowns
2. Damien Williams- Running Back- Kansas City- Williams didn’t generate the projected stats. Fantasy owners may be reluctant to start him but he ran all over the Vikings defense last week. Williams may be on the verge of several monster performances.
My projection: 90 rushing yards, two rushing touchdowns
3. D.K. Metcalf- Wide Receiver- Seattle Seahawks- The rookie wide receiver Metcalf will have another big-time performance. Lockett could be slowed down by an injury if he starts so that means more opportunities for Metcalf to have stud performance.
My Projection: 105 receiving yards, two touchdowns
Sit Them:
1.A.J. Green- Wide Receiver- Cincinnati Bengals- A.J. Green should start tomorrow. However, fantasy owners may want to delay starting him until next week just to play it safe.
2. Jaylen Samuels- Running Back- Pittsburgh Steelers- It would be wise to sit Samuels as he goes against the Rams defense which could limit his rushing yards. There are better options than Samuels this week.
3. Sam Darnold- Quarterback- New York Jets- There seems to be a temptation to start Darnold all of the sudden. Let him show some consistency, Don’t start him!
Sleeper
Kareem Hunt-Running Back- Cleveland Browns- Hunt comes back from his eight-game suspension. Expect Hunt to play with anger and passion. The Bills defense could be confused by two different run game styles as Nick Chubb is a pure, old school power back while Hunt will bring speed and finesse.