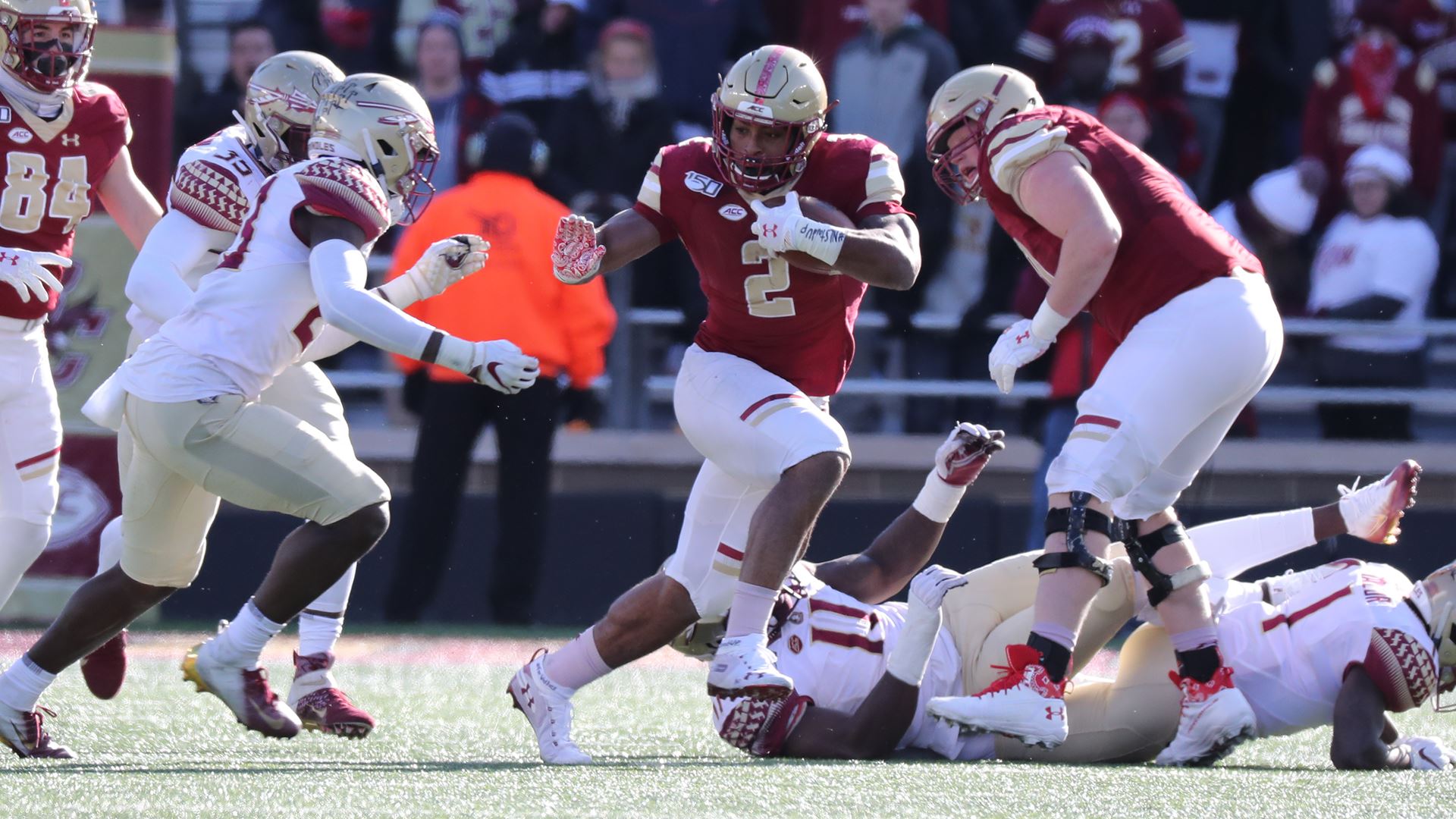 Senior Day is always a special day for the players, fans, parents, and coaches. It’s the end of a four-year run that is filled with ups and downs. On Saturday, the BC Eagles (5-5, 3-4) had their chance to honor those who have been a part of this program. The game vs the Florida State Seminoles (5-5, 4-4) would have more meaning because a win in the home finale would make the Eagles bowl eligible. However, Florida State had other ideas with interim head coach, Odell Haggins, making his debut as the head man at Florida State. His team gave him a great present with a road win, 38-31 over BC.

Too many big plays once again was a problem for an Eagles defense that came into this game ranked #110 in the country. Florida State’s offense was able to get large chunks of yards in both the passing and running games. Special teams were also a problem for Boston College. Two missed field goals in the first half could have given the Eagles a bigger margin to take with them to the locker room. But it was not to be. Those missed attempts might have affected the way the second half was played.

In the end, these stats came back to bite the Eagles. Stats like 36 more plays run by Boston College (93 to 57), 12 more first downs (31 to 19), and five of six in the red zone. All that despite the two missed fields goal tries. Boston College was 14-of-20 on third downs and based on these numbers you would think it was a good day for the Eagles. Not the case as head coach Steve Addazio said afterward: “too many chunk plays and missed tackles.” As far as the tackling goes the coach said: “it been a roller coaster ride with the tackling.”

In the first quarter, the Eagles ran 24 total plays of which 20 were runs. Their lone touchdown of the quarter was a completed pass from Dennis Grosel (20-29, 227 yards, 2 TD, 1 INT) to Kobay White for 17 yards. Florida State could only muster a 20-yard FG by Ricky Aguayo. At the end of one BC led 7-3. A missed 37-yard FG by Aaron Boumerhi could have added to the lead.

In the second quarter, both teams traded scores. David Bailey (68 yards on 12 carries and a score) took it to the house from 11 yards out to give Boston College its biggest advantage of the day at 14-3. One of those chunk plays got the Seminoles back in the game as quarterback James Blackman (18-26, 346 yards, 2 TD) hit Tamorrion Terry down the right sideline for a 74-yard catch and run to the end zone to make it 14-10 BC. Just before intermission, Bournerhi tried a long field goal attempt of 45 yards that went wide right. At the break, the Eagles had a 14-10 lead.

Florida State, which deferred to the second half, took advantage of that decision by taking the opening kickoff of the half and doing something with it. Backup QB Jordan Travis became quiet the running threat. First, he gave his team their first lead of the afternoon by running 26 yards down the sideline to give the Seminoles a 17-14 lead. Florida State added to the lead when Cam Akers (62 yards on 18 attempts) ran it in from 13 yards out. State was now up by ten at 24-14 late in the third.

In the fourth, Boston College battled all the way back to tie the game. First, a 30-yard FG by Boumerhi (1-for-3 on attempts) made it a one-score game at 24-17. Then the Eagles went on a 13-play 90-yard drive that resulted in a one-yard TD by Grosel to tie the game at 24-24. With overtime looking like a possibility, the Seminoles got the ball back with 2:27 left in the game and quickly took care of that idea. Blackman hit D.J. Matthews for a 60-yard catch and run to pay dirt. The big play gave the lead back to Florida State at 31-24. Travis added another long run, this one from 66 yards out to give his team an important road win in the conference and keep their bowl hopes alive. The Eagles added one more before the clock ran out to make the final score Florida State 38 Boston College 31.

After the game, Higgins said: “how proud he was of these young men.” They wanted to show “We are Florida State.” He would go on to say “the mood in the locker room after the game was outstanding.”

For BC, the road to a possible bowl game is not an easy one with away games left with both Notre Dame and Pittsburgh to end the season. A victory in at least one of those games will be required. For Florida State, things just got a bit easier for them as they head back home to play Alabama State before heading out across the state to face Florida.