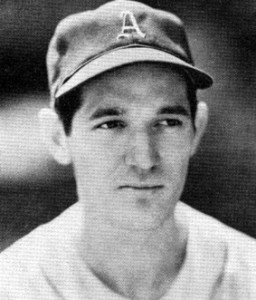 The following is a guest column by Douglas J. Gladstone, author of A Bitter Cup of Coffee, about one-time Philadelphia Athletics/Chicago White Sox reserve catcher George Yankowski, also a veteran of the Battle of the Bulge. He, too, is one of over 600 short-career former major leaguers frozen out of the 1980 pension realignment that made 43 days the minimum major league service time for players to qualify for full pension benefits after their playing days ended.

For instance, in 2016, there was a regular-season game played at the Fort Bragg military base. And there’s a refurbished single-family home for student veterans on the campus of Baldwin Wallace University that MLB and the Cleveland Indians financially supported. Those are just two examples of the game’s support of military personnel, to say nothing of all the on-field recognition ceremonies that are always held at each stadium.

That’s why what is happening to my friend George Yankowski is such a head-scratcher.

On November 19, George turns 97-years-old. George, who plays a round or two of golf every week, still maintains an active lifestyle. Oscar-nominated actor Gary Sinise, whose Sinise Foundation does passionate work on behalf of active duty personnel and retired veterans like George, will even be meeting him at the Villages in Sumter County, Florida.

Born in Massachusetts, George was a hard-hitting catcher for both the Watertown High School Red Raiders as well as the Huskies of Northeastern University, One of the original six alums inducted into the Northeastern University Hall of Fame in 1974, it was while attending Northeastern that Yankowski enlisted in the U.S. Army in October 1942, and left for Fort Devens in April 1943.

George wanted to become an aviation cadet, but ended up in the infantry and trained as a sniper. He sailed for Europe in 1944 with the 346th Infantry Regiment in the 87th Infantry Division. In 2014, Miami’s French Consul General awarded him the French Legion of Honor Medal.

He fought in Metz, France—and then moved to Luxembourg, Germany, where he took part in the Battle of the Bulge. He earned the Bronze Star and the Combat Infantry Badge for his frontline encounters during that famous 44-day campaign. George came home from the war in June 1945, and after a three month battle with hepatitis in October of that year, got officially discharged in January 1946.

Sadly, the contributions of a man who defended our freedoms and liberties fighting overseas don’t mean much to MLB or the union representing today’s players, the Major League Baseball Players’ Association (MLBPA).

Originally signed by Philadelphia Athletics Hall of Fame manager Connie Mack, George appeared in six games for the Athletics during the 1942 season and 12 games for the Chicago White Sox during the 1946 season. But he is among the 626 retired players who aren’t receiving a pension for their time in “The Show.”

George is without an MLB pension because the rules for receiving MLB pensions changed in 1980. George and the other men do not get pensions because they didn’t accrue four years of service credit. That was what ballplayers who played before 1980 needed to be eligible for the pension plan.

Instead, they all receive nonqualified retirement payments based on a complicated formula that had to have been calculated by an actuary. In brief, for every 43 game days of service on an active MLB roster George accrued, he’d get $625, up to the maximum amount of $10,000 By contrast, the maximum allowable pension a retired MLB player who is vested can make is $225,000.

What’s more, the payment cannot be passed on to a surviving spouse or designated beneficiary. So none of Yankowski’s loved ones, such as his wife, Mary, will receive that payment when he dies.

These men are being penalized for playing the game they loved at the wrong time.

Though the current players’ welfare and benefits fund is valued at more than $3.5 billion, the MLBPA has been loath to divvy up more of the collective pie. Many of the impacted retirees are filing for bankruptcies at advanced ages, having their homes foreclosed on and are so poor and sickly they cannot afford adequate health insurance coverage.

George Yankowski was willing to take a bullet for us. To die for us. And how do we repay him? With a gross check of approximately $2,500. And that’s before taxes are taken out.

When he got his first check eight years ago, you know how he spent it? He used the money to pay for sorely needed dental work. Meanwhile, a member of the Boston Red Sox voted a full postseason share for winning the World Series received $418,000 last year.

Baseball has the money to pay the men like George. If the union goes to bat for them. MLB also cut a $10 million check two years ago to support the programs at the National Baseball Hall of Fame and Museum in Cooperstown, New York. That’s right—museum relics received financial support instead of flesh and blood retirees.

This is no way for the national pastime to be treating our war heroes. Or anyone else, for that matter.