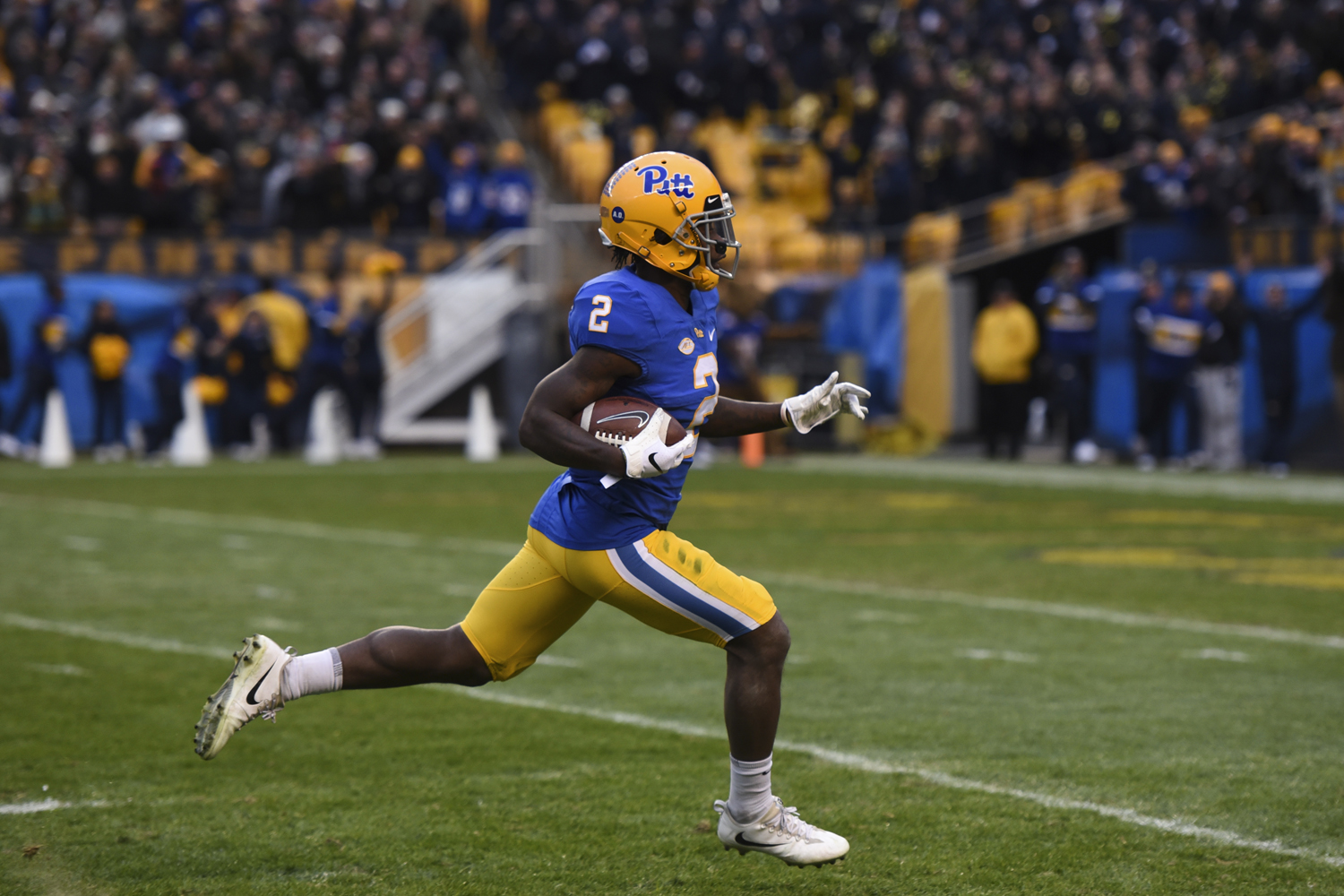 The game was there for the taking last week for the Pitt Panthers.

Against their bitter rivals from across the state, and 17.5 point underdogs, there were the Panthers at the Penn State one yard line, down 17-10, midway through the 4th quarter.

The sensible thought would be to run it four straights times, if needed, to get one bloody yard, and know the game up at 17.

Things did not go according to plan. On 4th down, to the shock of not just everyone watching in the stadium and on TV, but to the Panther players themselves, Pitt head coach Pat Narduzzi decided to go for a field goal…

Yes, a field goal. Narduzzi’s reasoning was three from this possession would put the Panthers down four, with the chance to go ahead the next time they got the ball.

Alex Kessman missed, however, and the air went out of Pitt like a balloon.

The Panther’s defense held tough and gave the offense one last chance, but Kenny Pickett’s throw into the end-zone as time expired was batted away, and the Panthers left Happy Valley with a bitter taste in their mouths, and wondered what could’ve been.

Pitt’s defense feels it is up to the challenge, and they had better be. The Knight’s up tempo play and overall team speed is incredible, and if left unchecked, bad things will happen before the Panther faithful’s eyes this Saturday afternoon at Heinz Field.

“It’s phenomenal how fast they go. They’re averaging 97 snaps a game, ” said Pitt defensive coordinator Randy Bates. “It’s an impressive thing how they do it.”

The Panthers fell to the Knights last year 45-14, so they have experience in facing this offense.

“We have a little bit of an idea how it works,” Bates said, who then added when asked if he had a new strategy, “Yes…. We’re getting prepared differently. Let’s put it that way.”

With how fast UCF plays, Pitt will plan to rotate their players in and out to keep them fresh and cramp-free, something that hampered the team down in Florida last year.

“I’m as confident as I can be,” Bates said. “They’ve all played now, and they all got experience under their belt.”

One player that will be eager to put a stop to the Knight’s is defensive lineman Jaylen Twyman, who has recorded 4.5 sacks so far this season.

“He’s a bright, young man and also a football mind,” Bates said. “All those things make it really easy to change him up a lot.”

Bates will deploy Twyman all over the field to keep the opposing offense guessing where he’ll be attacking, something Twyman enjoys quite a bit.

“I’m definitely happy with it,” Twyman stated. “They’re letting me play football. It gives me a chance to make a play because the offense doesn’t know where I’m going to be.”

On the offensive side, Pitt offensive coordinator Mark Whipple would like to see his team’s play in the 2nd quarter start to trickle into the 2nd half and put up some much needed points.

All five of Pitt’s touchdowns have been scored in the second quarter.

“I know the stats,” Whipple said Tuesday during interviews. “It’s been our best quarter this year. So let’s play the game like it’s the second quarter.”

The Panthers are the only ACC team to not score a touchdown in the 2nd half this year, and if Pitt is going to pull off the upset over UCF, that trend had better chance in a hurry.

Now Whipple and his young quarterback need to find a way to be that consistent all game long.

“He definitely gets in a groove,” Panther wide receiver Maurice Ffrench said of Pickett in the second quarter. “He throws everything on time. … He knows where we’re at and knows what time to throw it at.”

It would behoove the Panthers to finally establish something that resembles a rushing game, which is curiously missing from a program that has been so successful at doing.

“If we can run the ball better, you can stay out of the third-and-long,” Whipple said. “I think we’ve been pretty good up to seven [yards], and then after that there’s been some breakdowns, which kind of happens across the country.”

The Panther offense has yet to be given the ball after any type of huge turnover, something that would certainly aid in Pitt’s scoring capabilities.

“We need to help each other out,” Whipple added. “Field position plays into it.”

Whipple is ready for his unit to do it’s part helping the defense.

“We know we have to put points on the board,” Whipple said. “We have to help the defense. We’ve been trying to do that all along. It’s just been a work in progress.”

When you think of Central Florida, the first thing that comes to mind is their speed.

“They haven’t lost a regular season game since 2016, so if you think we’re thinking about anything else except that, you’re crazy,” said Pitt HC Pat Narduzzi. “Again, 27 straight regular season games. They lost to LSU in a bowl game. They’re explosive, they’re fast, they’re going to snap the ball within 7 to 12 seconds, a lot of them under 10 seconds.”

Pitt’s vastly improved defense kept Virginia’s Bryce Perkins pretty much ordinary. They limited Penn State to 17 points, after the Lions had previously scored 79 and 45 in their previous games.

Now they face their toughest foe to date, a UCF team that has scored 31 or more points in 29 straight contests.

“Receivers, Gabriel Davis, Tre Nixon are really good,” said Narduzzi. “The Killins kid in the backfield is really good. They’re explosive, and there’s a reason they’ve won. They’re sitting in a hotbed of players down in the state of Florida. For all those voters out there, it’s no fluke.”

The Panthers will have to be ready for the challenge, play smart football, and make the tackle when defense meets offense. It will take a team effort as players will be rolling in and out of the game to keep fresh ahead of UCF’s uptempo offense, as coach mentioned with the Knights snapping the ball an average of 7-10 seconds after the conclusion of the play.

This week in practice, the Panthers have done all they can to mimic the Knight’s offense.

“We’re making it over tempo. Like to the point where it’s crazy and unrealistic,” said Panther LB Saleem Brightwell, who will start for the injured Elias Reynolds. “That way when you get to the game, they won’t be coming out as fast as we thought. … Shoutout to the scout team. They’re going fast, just like us. They’re in for every single play. We at least have subs.”

This is yet another huge game for Pitt to make a statement before it’s home crowd. They came out flat against Virginia before finding their rhythm to lead the Cavs at halftime. Then the Panther offense disappeared in the 2nd half. As you read above, that same trend occurred again vs Ohio and Penn State. Pitt, on both sides of the ball, will have to play a full game to take down a team that hasn’t lost in the regular season since 2016. Their only loss in the last two years was in the Fiesta Bowl last year against LSU 40-32.

Pitt plays their own style of an up tempo offense, but it would benefit them greatly if they were to get the running game going. That would allow Pitt to be balanced and give Kenny Pickett a few shots downfield to one of his receivers in one on one coverage. Pitt also needs to play a north-south game. UCF is too fast to try slow developing run plays to the outside, or those silly wide receiver screens. Go after the Knights aggressively and attack downfield.

Defensively, the front seven will have to be smart, fast, and make tackles. UCF QB Dillon Gabriel cannot be allowed to sit in the pocket and sling the ball around.

As they did in their first three games, the Panther defense will need to make the opposing quarterback’s life miserable, especially with a few punishing hits. Everyone on defense needs to be in swarm mode and gang tackle when they identify the ball carrier.

This team is improving game by game, and now they have a chance to make the pain of the Virginia and Penn State losses a distant memory. A big win here would be a huge boost in confidence, and would set the Panthers up for another run at the ACC Coastal Title.

Not only is UCF’s winning streak coming to an end this Saturday, so will their points scoring streak. Pitt pulls the upset at home and shocks UCF….

Tough kid, good arm, accurate when not under heavy pressure. Utilizes his legs well and scrambles for extra yards.

Talented ball carrier who looks to make his mark in the 2019 season.

One of the best returners in the game. Looking to take his receiving game to the next level.

Enters this season looking to have a breakout season for the Panthers.

Great blocker who would like to incorporate a few catches intro his arsenal.

Hoping to bring the position out of the lost and found.

A look at the Central Florida Knights!

His speed kills. A senior running back at UCF with a 4.39 forty and 10.53 hundred has a school record 25 career touchdowns. Blink and he’s gone.

Another very good back for UCF. Anderson has pretty good hands, so beware him out of the backfield.

Finished last season with 18 catches for 234 yards and one touchdown. 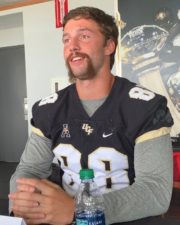 The Knights play well defensively with their great overall team speed. UCF is giving up just 13.7 points per game. So far, they are allowing 253 total yards a game, but they haven’t really faced a good offense yet. They will this week when the Pitt Panthers take the field..