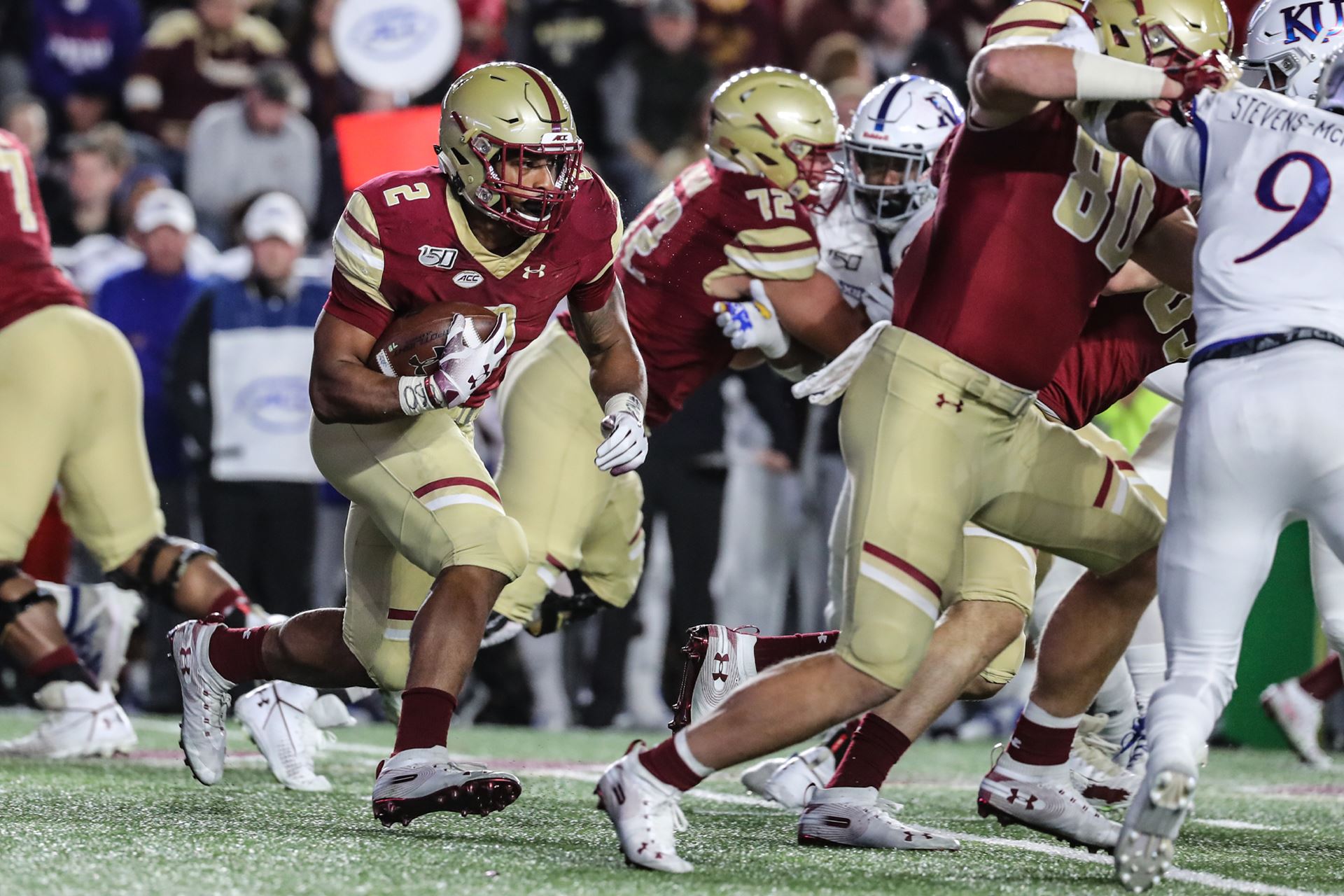 Under the lights at Alumni Stadium, the Boston College Eagles played host to the Kansas Jayhawks for the very first time. The Eagles were looking to start their season 3-0 for the second straight year. Kansas, under new head coach Les Milles, was looking to rebound from a loss last weekend to Coastal Carolina and get over the .500 mark. Through two games Boston College’s offense has been moving the ball up and down the field. They are seventh nationally and first in the Atlantic Coast Conference in completion yards at 18.6. Quarterback Anthony Brown leads the conference in passing efficiency and is ranked tenth in the nation. Kansas is no stranger to playing Friday night football as this was the 35th game on Friday night for the Jayhawks. In their history, they are 19-14-2. It has been a while since Kansas has played a team from the ACC. The last time was in 2012 and they were looking for there first win on the road against the ACC since 1980.

As was the case a week ago, BC did not win the coin toss to begin the game. Just like a week ago, it did not matter. The Eagles took the opening kickoff and marched 75 yards downfield in seven plays behind the legs of junior running back A.J. Dillon. He ripped off runs of 31 and 10 yards on the drive. He would finally take it in from two yards out to give the Eagles the early 7-0 lead. It should be noted that the drive was helped out by two defensive penalties by the Jayhawks.

The ensuing drive by Kansas resulted in the game’s first turnover. Jayhawks quarterback, Carter Stanley, overthrew his target and was picked off by Eagles strong safety Mehdi El Attrach (2nd career INT). The interception was the third thrown by Stanley and it would result in more points for the Eagles as they got a field goal from Aaron Bourmarth of 40 yards. Boston College converted on its first two drives and led 10-0.

Kansas got their offense going as Stanley began taking his team downfield through the air. It would set up, an 18-yard touchdown pass to tight end Jack Luavasa, his first TD catch of the season. Boston College’s lead was now 10-7. Before the quarter came to an end, the Eagles struck again. First, Brown threw a screen pass to the right to RB David Bailey who took it 26 yards deep into Kansas territory. On the very next play, Brown found TE Korab Idrizi over the middle for a 20-yard TD catch. At the end of one, BC was up 17-7.

It would take the Jayhawks very little time, fifty seconds into the second quarter, to get that score back. First, Stanley found wide receiver Andrew Parchment, wide open over the middle for a 37-yard gain. It set up the Jayhawks at the BC one-yard line. On the next play, FB Hudson Hall took it in from a yard out for his second touchdown of the season. Kansas was back within three points at 17-14.

A shootout looked to be in order as both teams seemed to have no problem moving up and down the field. Case in point, Boston College was already seven of nine on third down. The Jayhawks defense made a stand as the quarter made its way to the halfway point. With the Eagles driving for what looked like another score, Kansas’ defense rose up and stopped Boston College on downs to keep the game at a field goal difference.

Boston College’s pass defense was starting to get carved up by Stanley. Because of that, Kansas was able to take there first lead of the night with 3:41 left before halftime. Stanley twice hit Kwamie Lassiter II for a pair of 21-yard catches. Then, Stanley found Parchment for a four-yard touchdown pass despite being double covered. The Kansas lead was 21-17 late in the half.

It was BC’s turn with the ball and they delivered once again with a big play on the drive through the air. Brown hit Hunter Long for 42 yards. The Eagles offense then went deep into their playbook as a double-reverse set up a 12-yard touchdown pass from wide receiver C. J. Lewis to Brown. It was the first career TD pass for Lewis and with 45 seconds left in the half, the Eagles were back in front 24-21. With under a minute left in the half, there was still enough time for Kansas to take the lead back. This time the key play was on the ground, an 82 yard run by Khalil Herbert down the right sideline. It set up the second touchdown catch of the half by Parchment, this one of three yards. Kansas went to the locker room up 28-24.

The halftime statistics told the story about how the first thirty minutes were played. Both teams gained over 300 yards of offense. Kansas was perfect in the red zone 4-for-4, while BC was 3-of-4. Jayhawks quarterback Stanley was 13-of-15 for 165 yards, 3 TDs, and 1 INT. Brown was pretty good for the Eagles going 7-for-15 118 yards and 1 TD while A.J. Dillon had 131 yards on the ground.

Kansas picked up where they left off in the first half as the first drive of the third quarter saw them drive the ball down to the BC six-yard line. The Eagles found a way to hold them to a 24-yard field goal by Liam Jones to increase the Jayhawk lead to 31-24 with ten minutes left in the third. Kansas was at it again, this time on the ground as Herbert and Pooka Williams ran through the Eagles defense. Herbert ran for 36 yards on a play that started left, but a change of direction allowed him to go down the right sideline before being knocked out of bounds. Williams took it in from there with a 12-yard touchdown run. Just like that, it was 38-24 Jayhawks. To this point in the game, they had 481 yards of total offense and were a perfect 6-for-6 in the red zone.

Before the third quarter came to a close, Kansas scored again. This time a 30-yard field goal by Jones increased the Kansas lead to 41-24 with 35 seconds left. The FG was set up by runs from Williams and Herbert who were running through BC tacklers at will.

As the fourth got started, the Eagles were moving the ball once again. The only differences was they would not put any points on the board because a 31-yard field goal by Boumerhi would be no good. A wasted drive for the Eagles as they stayed down three scores with 11 minutes left in the game. BC was in catch up mode and it did not work out well. The Jayhawks defense came up with another fourth-down stop. This time it was Dillon who could not convert a fourth and one with seven minutes left in the game.

All that was left for Kansas to do was run out the clock. They would add one more score on a six-yard run by Herbert, his first of the game. The score came about after another turnover on downs by the Eagles offense deep on their side of the field. The final score from Alumni Stadium was Kansas (2-1) 48 Boston College (2-1) 24.

The story of this game was the lack of defense by the Eagles. Kansas tore up this unit for 567 yards of offense. 329 of those came on the ground. Both Herbert (187 yards, 1 TD) and Williams (121 yards, 1 TD) took care of things on the ground. Stanley finished the game 20-for-27 for 238 yards, three touchdowns, and one pick. His favorite target was Parchment (8 catches for 100 yards and 2 TD).

Boston College did get 154 yards on the ground from Dillon with a touchdown. Brown was 18-for-36 for 195 yards and a score. It’s the third straight game Brown has not thrown an interception. Kansas was 8-for-8 in the red zone, 8- of 15 on third downs.

It was a bad night all the way around for the Boston College defense. It will have to be corrected in a hurry as the Eagles go on the road next week for the first time as they take on Rutgers.