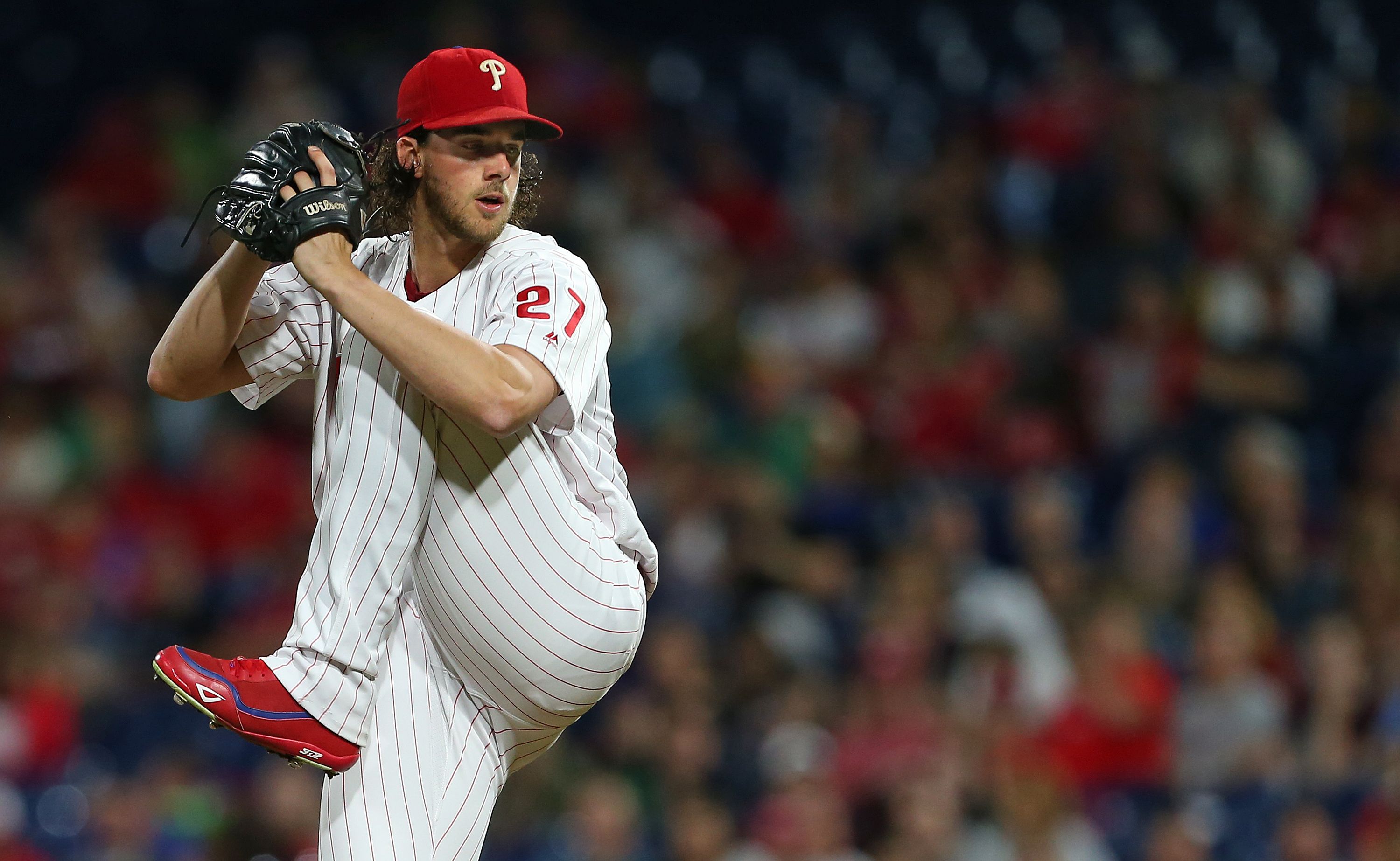 The last week in MLB was about starting pitchers in both leagues signing contract extensions, an American League club agrees to multi-year deals with two talented players and a third baseman signs a contract.

#Phillies and RHP Aaron Nola have agreed to a four-year contract through the 2022 season. The deal also includes a club option for the 2023 season. pic.twitter.com/E5ocTPOwqA

The Philadelphia Phillies have signed starting pitcher Aaron Nola to a four-year, $45 million contract extension, per Ken Rosenthal of The Athletic.

#Phillies on verge of signing RHP Aaron Nola to a four-year, $45M extension with a club option, sources tell me and @MattGelb.

The deal includes a team option for a fifth year, per Jeff Passan of ESPN.

The Philadelphia Phillies and starter Aaron Nola are in agreement on a four-year, $45 million deal that includes a club option for a fifth season, league sources tell ESPN.

The option is worth $16 million, per Jon Heyman of MLB Network.

Nola deserved this extension, considering how well he’s performed in the Phillies’ rotation over the past couple of seasons.

The talented right-handed pitcher blossomed into the staff ace and was one of the best starting pitchers in the NL last year.

The deal for Nola is solid for him and the Phillies.

Nola receives a significant raise in salary for the upcoming 2019 season, and it will continue to increase over the life of the contract.

The Phillies have bought out his remaining arbitration years and at least one year of free agency. The contract is extremely team-friendly, and the case can be made, they have an ace at a bargain.

If the Phillies had continued to go through arbitration with Nola, the yearly salary could’ve been higher, given how Nola has pitched over the last two years.

When the Phillies drafted Nola with the seventh overall pick during the 2014 MLB draft, it was believed they were selecting their future ace, and several years later, they have a steady anchor for their starting rotation.

The New York Yankees have signed starting pitcher Luis Severino to a four-year, $40 million contract extension and it includes an option for a fifth year, per Jeff Passan of ESPN.

Starter Luis Severino and the New York Yankees are in agreement on a four-year, $40 million contract extension that includes a fifth-year club option, a league source tells ESPN. The deal will buy out four years of arbitration and potentially one free agent season.

The fifth-year option is worth $15 million, including a $2.75 million buyout, notes Passan.

Interesting part of that: higher salaries in ’20 and ’21, lower than usual in ’22. Why? Protection against a work stoppage.

This is a good deal for both parties as Severino receives financial security, while the Yankees buy out his four years of arbitration and possibly one year of free agency if the option is exercised.

The right-hander has been the leader of the rotation for each of the past two seasons and earned the contract extension.

The next step in Severino’s development of an ace is to perform better in the postseason.

He has a 6.26 ERA in six playoff starts, and he’s a much better pitcher than what those six outings in the playoffs are indicating.

This is something all pitchers go through as pitching in the postseason is different compared to the regular season.

The positive aspect for Severino is he’s just 24-years old and will become a better postseason starting pitcher.

Polanco has signed a five-year, $25.75 million contract extension and it includes club options for the 2024 and 2025 seasons, per Jim Bowden of The Athletic.

Kepler gets 35M, 5 years plus option with Twins

The deal includes a club option for a sixth year worth $10 million, per Jeff Passan of ESPN.

Outfielder Max Kepler and the Minnesota Twins are in agreement on a five-year, $35 million deal with a sixth-year option, a league source tells ESPN. The option is for $10 million and includes a $1 million buyout.

Polanco was suspended 80 games to start the 2018 season as he tested positive for a banned substance (Stanozolol) but hit decently in his return from suspension for the Twins as he posted a .288 batting average and .773 OPS in 77 games with 18 doubles, six home runs, and 42 RBIs.

The two players didn’t have breakout seasons last year, but the Twins are banking on they’ll continue to develop over the next several years.

Since the Twins are a small-market team, these are the type of deals they must make to keep their talented players on the team.

The Milwaukee Brewers have signed third baseman Mike Moustakas to a one-year deal worth $10 million with the addition of a mutual option for 2020, per Mark Feinsand of MLB.com.

Source confirms Moustakas deal with Brewers is $10M with a mutual option for 2020. @JonHeyman was first.

The third baseman split time between the Kansas City Royals and the Brewers last year.

Moustakas was a solid hitter for the Brewers, as indicated by him having a .256 average and .767 OPS with eight home runs and 33 RBIs in 54 games with them.

This is a good deal for Moustakas and the Brewers as he joins a team which made the postseason last year and has a good chance to make a return trip in 2019.

The Brewers add a proven veteran to their lineup, who showed last year he can be a productive member in the lineup.