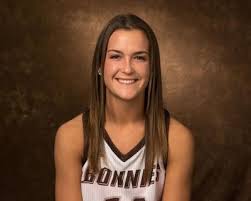 Over the last few weeks, I have been highlighting the efforts of some of the male players in the A-10 conference. In today’s society, men and women are said to be treated “equally” by people. However, through the eyes of a journalist, I see the discrepancy in the amount of coverage they receive. I am noticing this across all levels of play. I strongly believe the A-10 has their fair share of female standouts who are overshadowed and, underrated.

This week I will be highlighting a young lady who I have been watching since my eighth-grade year.  She was a ridiculous standout for the Randolph high school basketball team. I remember a particular night that I came home from school and wanted to go watch my local high school girls hoops team take on Mckenna Maycock. I left my house early enough to catch the junior varsity game. It was during that game that I saw former lady Bonnies coach Jim Crowley. I watched him and his assistants watch Maycock in warm-ups, it was then that it hit me “she’s a damn good player”. I knew she was special to be scouted by a division one program. The success is carrying over to her time at St. Bonaventure.

She is the daughter of Robin and Michael Maycock. Her father ran track at Tri-State University and her mother played hoops at Fredonia State. Mckenna was a two-time New York Stae player of the year. She is the young lady who sits atop the all-time scoring list with 2,947 points in her career at Randolph. She averaged 27.5 points 10.4 rebounds and, 5.3 assists per game during her senior season. Her senior season she averaged 30.8 points when she took the floor.

Maycock is now a senior at Bonaventure playing under Coach Jesse Flemming. In the last two seasons, the accounting major has made the A-10 all-academic teams. Her first year as a Bonnie she made the commissioner’s Honor roll list. She has played in 12 games on the schedule where she averages 10.4 points and 5.3 rebounds per game. She had mediocre seasons in her first three campaigns.

Saint Bonaventure should be excited knowing she is as good as she is. She may not be the most spectacular player known to man, but she is a standout by A-10 standouts. Conference play is just getting into full swing and I expect her to kick play up to another level in the near future.