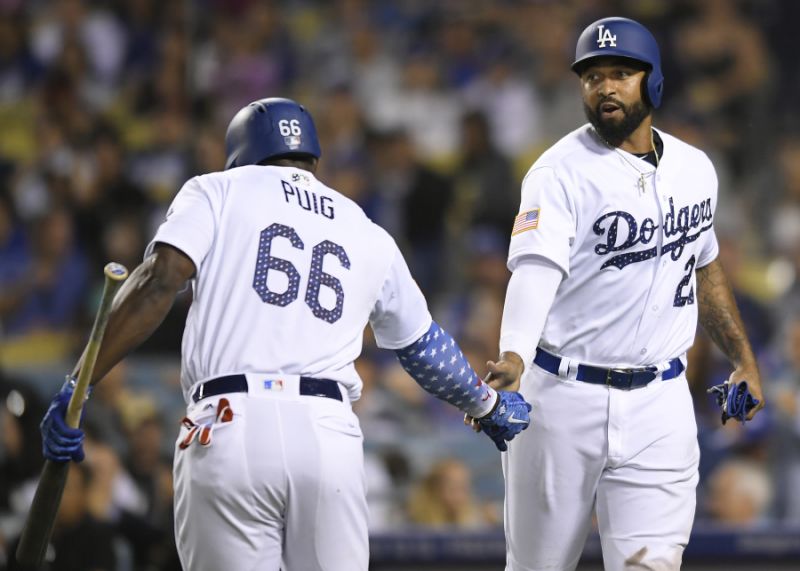 The last week in MLB was about a major trade in the National League, a pair of starting pitchers and relievers sign deals and an infielder moves west.

The Los Angeles Dodgers and Cincinnati Reds completed a huge trade a couple of days ago.

The #Reds have acquired LHP Alex Wood, OF Matt Kemp, OF Yasiel Puig, IF/C Kyle Farmer and cash from the Dodgers in exchange for RHP Homer Bailey and minor leaguers IF Jeter Downs and RHP Josiah Gray. pic.twitter.com/IjJusbl0Ud

The amount of money the Reds will receive in this deal is $7 million, per Joel Sherman of the New York Post.

The surprising part about this deal is the Dodgers were able to move both Kemp and Puig. They were trying to move Kemp as he was owed $20 million this upcoming season, and Puig was unhappy last season about his playing time.

Bailey has been dreadful on the mound over the last four seasons, as indicated by him tallying an ERA over five in each year over that time frame.

However, injuries have played a role in the declining performance as he was limited to 46 starts within that period.

The Dodgers will release Bailey once the trade is official, per Mark Feinsand of MLB.com.

Source confirms the Dodgers plan to release Homer Bailey after the trade becomes official. @Ken_Rosenthal was first with that news.

The deal was interesting for both teams as the Dodgers free up salary to stay under the luxury-tax threshold and acquire talented prospects, per Jeff Passan of Yahoo Sports.

The upshot for the Dodgers is clearing money under the luxury-tax threshold. Matt Kemp is a $20M hit this year and Yasiel Puig and Alex Wood somewhere from $20M-$22M. Even though Homer Bailey and his buyout will cost $28M, the tax hit is just $17.5M.

The Reds wanted to add athleticism, experience, and power in the outfield while addressing a need for a catcher in acquiring Farmer.

The team also has a solid member of the rotation in Wood, and they wanted to move on from Homer Bailey, per Jon Morosi of MLB Network.

#Reds motivations in the deal: They wanted to add athleticism, experience and power to outfield. They addressed need for an optionable catcher (Farmer). They will count on Alex Wood as a member of their rotation. And they wanted to move on from Bailey. @MLB @MLBNetwork

The logical conclusion is the Dodgers made this move to go after free-agent outfielder Bryce Harper.

However, in talks with Harper, the Dodgers want a shorter deal in the four to a five-year range with a large average annual value, and they will be adamant about that even after the deal, per Sherman.

#Dodgers posture with Harper has been willing to do shorter deal (4/5 years) with large AAV, but do not want to tie up long-term $. Not sure they will come off of that posture even with this trade.

The other major aspect about the trade is the Dodgers’ luxury-tax payroll is over $180 million, including the money they’re sending to the Reds.

If they want to stay under, Harper won’t be signed by them, notes Passan.

For those shipping the Dodgers and Bryce Harper: After the trade, the Dodgers’ luxury-tax payroll is going to be more than $180M, including the money they’re sending to Cincinnati. If they want to stay under, Harper isn’t happening. If that’s not a concern, it’s a possibility.

The Washington Nationals have signed starting pitcher Anibal Sanchez to a two-year, $19 million contract, per Ken Rosenthal of The Athletic.

The deal includes a third-year option worth $12 million and another $4 million in additional incentives, per Jon Heyman of Fancred Sports.

Anibal gets 19M for 2 years plus option, 4M incentives. Could reach 33M for 3 years #nats

The right-hander for the first time since 2013 with the Detroit Tigers had a sub-three ERA. Sanchez is a steady option at the back-end of a starting rotation for a team.

The Nationals probably had the same idea; the club already fortified the top of their rotation by signing Patrick Corbin earlier in the offseason.

The club quietly has had a strong offseason to build a contender for the National East crown in 2019.

The St. Louis Cardinals have upgraded their bullpen in a major way by signing reliever Andrew Miller to a two-year contract.

The #STLCards have agreed to terms with free-agent left-handed relief pitcher Andrew Miller on a two-year (2019-20) deal with a vesting option for the 2021 season. #TimeToFly pic.twitter.com/2v6rfivKpq

The deal for Miller is worth $25 million, including a vesting option worth $12 million in 2021 if he appears in 110 games over the next two seasons and a full no-trade clause, per Ken Rosenthal of The Athletic.

Miller dealt with injuries to his shoulder, knee, and hamstring which impacted his performance on the mound.

The Cardinals have been looking for a top-end reliever over the last couple of seasons and currently, have it with the addition of Miller.

The Colorado Rockies have signed infielder Daniel Murphy to a two-year deal, and it includes a mutual option for a third year.

OFFICIAL: The Colorado Rockies have agreed to terms on a two-year contract, plus 2021 option, with infielder Daniel Murphy. pic.twitter.com/9vlCk1dNeZ

The contract is worth $24 million, and the mutual option is worth $12 million, including a $6 million buyout, per Ken Rosenthal of The Athletic.

Murphy accumulated a .299 batting average and .790 OPS with 15 doubles, 12 home runs, and 42 RBIs in 91 games as he split time between the Nationals and the Chicago Cubs last season.

Murphy didn’t play until early June as he was dealing with a knee injury.

The infielder has spent most of his career at second base, but the Rockies will probably have him play most games in 2019 at first base to minimize injury.

The addition of Murphy to the Rockies is great as he’s a fantastic hitter who utilizes the entire field and coupling this with him playing 81 games at Coors Field, this is a formula for success.

In Murphy’s career, he has compiled a .330 batting average and .894 OPS in 26 games at Coors Field. Murphy is a tremendous hitter, and it wouldn’t be surprising if he has a great 2019 season with the Rockies.

The Oakland Athletics have signed reliever Joakim Soria to a two-year deal, per Melissa Lockard of The Athletic.

The deal is worth $15 million, per Jon Heyman of Fancred Sports.

Soria deal is for 15M with a’s

The right-hander has been a solid reliever in the majors as indicated by his 220 saves and 2.88 ERA over 11 seasons.

The Athletics will use Soria in late-inning situations, and it’s possible he might occupy the set-up role for A’s closer Blake Treinen.

The Athletics signing Soria was a solid move as it gives them another steady arm in their bullpen.

The Los Angeles Angels have signed starting pitcher Matt Harvey to a one-year, $11 million deal, and the contract includes incentives worth $3 million per Jon Heyman of Fancred Sports.

Harvey gets 11M plus 3M incentives

Harvey proved after being dealt to the Reds he could get major-league hitters out consistently, which wasn’t the case earlier in the year for the Mets.

Harvey regaining his ace form from several years ago is probably unlikely, but if he can replicate what happened with the Reds over a full season for an Angels’ club which lacks starting rotation depth, this deal will be a success.