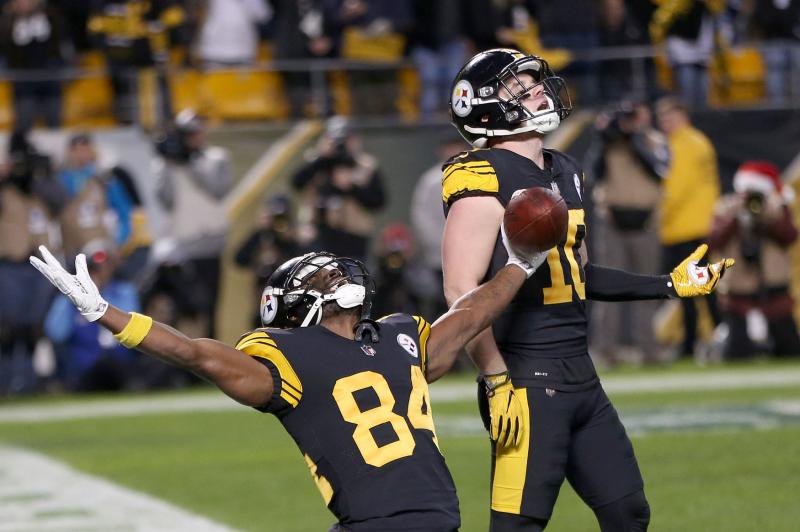 In terms of naming future Hall of Fame players, Ben Roethlisberger is a pretty good bet to be a first ballot selection. For his career, Big Ben is currently 6th in all-time passing yards with 55,527 yards, 7th with 359 touchdown passes, and has collected two Super Bowl rings to boot.

“Is that true?” Jordan said, looking at the questioner who asked if Roethlisberger was a Hall of Famer. “Really? In this era?”

Jordan placed Drew Brees, Tom Brady and Aaron Rodgers ahead of Roethlisberger. Then mentioned Peyton Manning, who retired after the 2015 season.

Jordan continued on, including the last of the talented trio drafted back in 2004…

Pittsburgh Steelers center Maurkice Pouncey got a good laugh on the remarks by Jordan.

“It’s totally fine,” Pouncey said about Big Ben’s HOF credentials. “There are a million people that think he is.”

Pouncey continued with a little smile.

Regardless of what Cam Jordan thinks, this will be a game that features two of the game’s greatest QB’s in Drew Brees and Roethlisberger.

You can almost bet that whomever has the better game will give his team the advantage in coming away with the victory this Sunday at the Mercedes-Benz Superdome, a possible Super Bowl preview, when the Saints (12-2) hook up with the Steelers (8-5-1) at 4:25 p.m..

The Steelers will be without their top running back in James Conner for the third straight game. Jaylen Samuels will look to pick up where he left off, as he torched the New England Patriots for 142 yards rushing, adding two receptions for 30 yards in his 2nd NFL start.

Juju Smith-Schuster, who has 95 receptions for 1,274 yards receiving and six touchdowns, is questionable with a groin injury sustained in Thursday’s practice.

His teammates are confident he will be available.

As did one of the game’s best receivers…

“I think he’ll be there for us,” Antonio Brown said.

James Washington, who would step in for Smith-Schuster if injured, believes in good Juju, as well.

“He’s a tough guy,” Washington said of Smith-Schuster. “I don’t doubt that he (will) be there.”

The Steelers broke out a rarely used five-wide look vs New England last week, and Roethlisberger, like his counterpart in Brees, likes to spread the ball around.

“Even last week, when JuJu was with us, Ben was putting us at different positions, looking for matchups,” Washington said. “So even if someone is not there, you still have got to know everything because you just never know what ‘7’ wants.”

Smith-Schuster is as explosive whether he lines up outside, or in the slot, but, 55 of his 95 receptions have come as he lined up in the slot.

“If (Roethlisberger) sees something during the game – and he sees everything –and he wants us to switch spots, we have to be ready,” Switzer said. “We have to know plays by concepts, not just what (position) we have.”

“It gives us a lot of weapons,” said Big Ben. “Obviously, we are limited in some of the things we can do but it creates some mismatch opportunities. Then it’s about finding the right mismatch or the right opportunity that is available for us.”

While Roethlisberger is busy utilizing whichever receivers or backs he has healthy, Joe Haden and the defense will be focusing on stopping the Saints talented wideout Michael Thomas, who has amassed 109 catches for 1,267 receiving yards and eight scores, and Alvin Kamara, who has rushed for 860 yards and 12 touchdowns… oh, and Kamara also has 77 receptions for 627 yards and another four TD’s.

“It’s not that simple,” Haden said about taking away the two players. “They definitely go to them a lot. Those are two premier players in their passing game. Kamara, he’s like a receiver. Mike Thomas, he’s a volume catcher. We got to make sure where those two are all the time.”

Week nine was the last time Thomas recorded a 100-yard receiving game. Teams have gone all in on stopping him, as behind him on the depth chart are players like Tre’Quan Smith, Keith Kirkwood, and Austin Carr, who have just 44 receptions combined between them.

Regardless, Haden knows he’ll have his hands full in covering Thomas.

“He’s a physical receiver who runs good routes and, at the same time, he’s working with a great quarterback who gets the ball to you,” Haden said. “A lot of times when you’re that good and got someone who can throw you open at the same time, it’s kind of tough. He’s able to get him the ball coming out of his routes.”

Defensive coordinator Keith Butler is beyond confident with Haden doing his job.

“He’s the best corner I’ve been around in my 20 years in the NFL,” Butler said.

The Steelers will be keeping an eye on the result of the Baltimore Ravens-LA Chargers game on Saturday night, as if the Ravens lose, Pittsburgh will clinch the AFC North title with either a win vs the Saints or Bengals in the regular season finale.

BUT…if the Ravens win, and both the Tennessee Titans (vs Redskins) and Indianapolis Colts (vs Giants) win their games, the Steelers will be feeling quite a bit of heat when they take the field in New Orleans. Under that scenario, if the Steelers fail to beat the Saints, then Pittsburgh would have to beat the Bengals the following week and pray that somehow the Cleveland Browns take down the Ravens in week 17.

How about the Steelers just do it on their own, and take care of business this weekend in The Big Easy?

Yes, the Saints are 12-2, and they are excellent at home, but like every team in the NFL, they have their strengths and their weaknesses that can be exploited.

The Saints have superb weapons for Brees in Thomas and Kamara… after that, well, let’s just say no other names bring fear when mentioned.

Pittsburgh’s biggest problems have been untimely and backbreaking turnovers, and a defense that has blown 4th quarter leads in four of their five losses.

Last week the defense put forth a superb effort vs Tom Brady and the Patriots, holding New England to just 10 points, turning Brady away on his final two drives of the game.

Look for the Steelers to imitate what teams have been doing to the Saints the past three weeks, that forcing the likes of Mark Ingram, Tre’Quan Smith, Keith Kirkwood, and Austin Carr to beat them, while locking down both Thomas and Kamara as best they can.

It also didn’t help the Saints cause with Cam Jordan running his mouth. As if Roethlisberger and the Steelers needed any more motivation to begin with, as, yeah, they are playing for their playoff lives here possibly…

The defense plays well again and Roethlisberger has a big game to put his team in position to win the AFC North title once again.

Ben Roethlisberger’s big arm, along with his uncanny ability to slip out of the pocket and extend plays makes him one one of the league’s best.

What more can you say about Antonio Brown? He is the league’s best wide receiver. His dedication and drive to be the best is unmatched by any player in the league. JuJu Smith-Schuster heads into his 2nd season and has picked up where he left off. Speaking of rookies, James Washington was a Camp favorite of Roethlisberger, and is starting to show flashes of becoming a dangerous weapon as the 3rd receiver. Eli Rogers is back and is excellent out of the slot. Darrius Heyward-Bey is mainly used on special teams. Ryan Switzer has been good in the return game, but has also established himself as a reliable target for Roethlisberger out of the slot.

A look at the New Orleans Saints!

Drew Brees is Drew Brees… he’s still one of the best in the game. Very accurate and super quick release. He’s thrown for 3,666 yards with 31 TD’s and just five picks.

Alvin Kamara can do it all. He has rushed for 860 yards and 12 touchdowns, with 77 receptions for 627 yards and another four TD’s. Mark Ingram is the change of pace back.

Michael Thomas is the lone weapon in the Saints receiving arsenal… he has 109 catches for 1,267 yards and eight TD’s. After that…well, Tre’Quan Smith, Keith Kirkwood, and Austin Carr have just 44 receptions combined between them.

Benjamin Watson keeps defying age… he’s reliable as ever with 32 receptions and 365 yards through the air.

The Saints are stout against the run, allowing just 79.1 yards per game. They allow 20.9 points per game and can get after the quarterback with 45 sacks. They have 12 interceptions and 10 fumbles recovered.