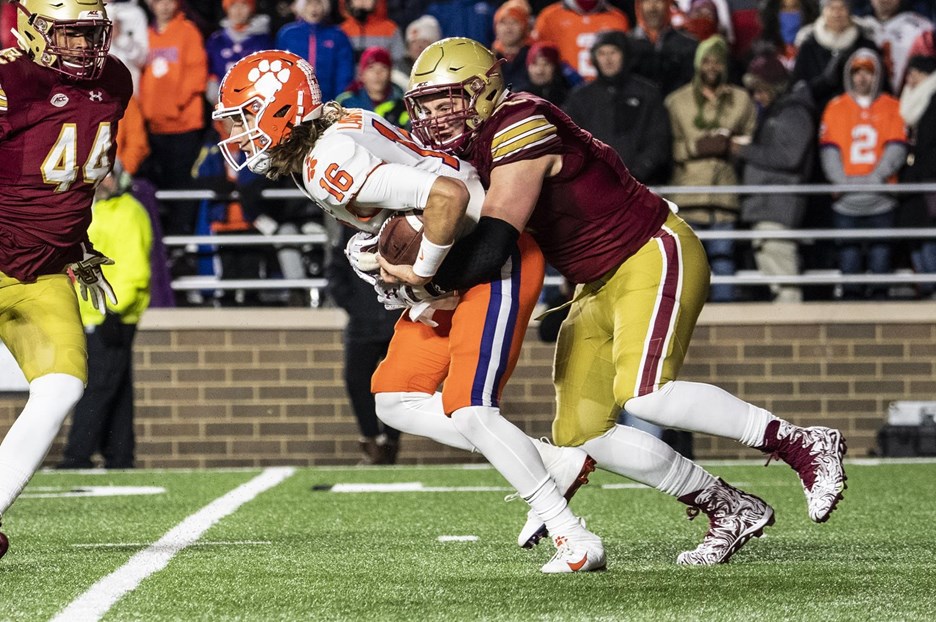 Fourth BC player to receive the honor

The award is presented to the top college football player who is a resident and/or played scholastically in the state of Connecticut. The award is voted on by the Walter Camp Football Foundation membership.

A Second Team All-American according to Pro Football Focus, Allen led the Eagles with 15.0 tackles for loss and ranked second with 6.5 quarterback sacks. He totaled 61 tackles (26 solo), 11 quarterback hurries, two fumble recoveries and one interception. He earned ACC Defensive Player of the Week honors following a seven-tackle (three for losses) and one quarterback sack performance in a win over Louisville on Oct. 13.

An All-ACC second-team selection, Allen ranks among the top 10 in school history in career quarterback sacks and tackles for loss. He was recently recognized with the Scanlan Award, BC’s highest football honor given to the senior who best embodies the ideals of Tom Scanlan, BC class of 1920.

A member of the New England Football Writers All-New England Team, Allen has accepted an invitation to play in the Senior Bowl in Mobile, Ala. Boston College (7-5) will face Boise State in the SERVPRO First Responder Bowl on Wednesday, Dec. 26, at the historic Cotton Bowl in Dallas, Texas.

A native of New Canaan, Allen played scholastically for head coach Lou Marinelli at New Canaan High School. A three-year varsity starter, Allen led the Rams to two Class L state championships and was named Connecticut’s Gatorade Player of the Year following his senior season (2014) as well as being named to the Walter Camp All-Connecticut Team.

Allen, along with the members of the 2018 Walter Camp All-America team including BC teammates Hamp Cheevers and Michael Walker along with Player of the Year Tua Tagovailoa (Alabama), along with other major award winners (Man of the Year Mike Golic; Distinguished American-Archie Manning; Perseverance Award-Jake Olson, USC), will be honored at the organization’s national awards banquet, presented by David McDermott Lexus of New Haven, on Saturday, January 12, 2019 at the Yale University’s Lanman Center.

Walter Camp, “The Father of American football,” first selected an All-America team in 1889. Camp – a former Yale University athlete and football coach – is also credited with developing play from scrimmage, set plays, the numerical assessment of goals and tries and the restriction of play to eleven men per side.

The Walter Camp Football Foundation – a New Haven-based all-volunteer group – was founded in 1967 to perpetuate the ideals of Camp and to continue the tradition of selecting annually an All-America team. Visit www.waltercamp.org for more information.