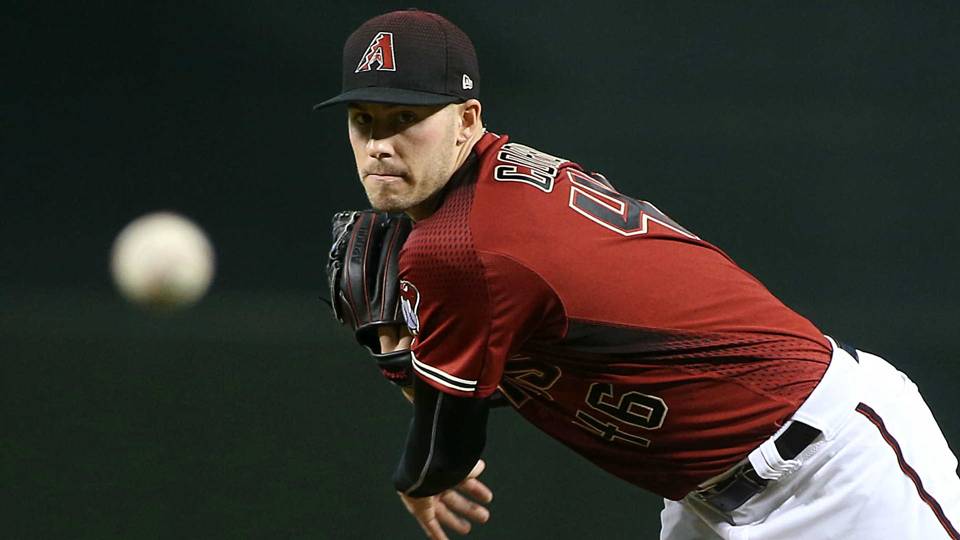 The last week in MLB was about a team in the National League upgrading their rotation, an elite first baseman getting traded, a starting pitcher in the American League signs a multi-year contract and another AL starter inks a multi-year extension

The Washington Nationals upgraded their starting rotation in a major way as they signed starting pitcher Patrick Corbin to a six-year, $140 million deal, per Jon Heyman of Fancred.

Corbin was the marquee free-agent starter available on the market, and it’s surprising the Nationals were able to sign him.

The deal for Corbin will include deferred money, per Ken Rosenthal of The Athletic.

Corbin deal with #Nationals likely to include deferrals, just as Scherzer’s and Strasburg’s seven-year contracts did… https://t.co/dzhjfQ0eDP

The New Yankees were expected to sign the left-hander as Corbin grew up in New York and the Yankees certainly need a starter like Corbin.

A reason the Yankees didn’t get Corbin is their unwillingness to offer him a contract for six years, per Heyman.

Yanks didn’t want to go 6 years for Corbin, so that was why he went elsewhere. will look at Eovaldi and Happ now.

The Nats have a dominating trio at the top of their rotation with Max Scherzer, Stephen Strasburg, and Corbin.

The next-closest trio in the NL had 99 fewer Ks. ???? pic.twitter.com/gz1eziLaqv

Corbin had a wipe-out slider and was very effective using it last season, by recording 195 strikeouts on his slider, 71 more than anyone else in the majors, per ESPN Stats & Info.

Patrick Corbin’s $140M contract with the Nationals is the 2nd-largest free-agent deal in team history.

Last season, Corbin recorded 195 strikeouts on his slider, 71 more than anyone else in the majors. pic.twitter.com/QJHlP7yFqf

The Nats have invested a whopping $525 million in the top three arms of their rotation, per Bob Nightengale of USA Today.

The #Nats now have $525 million invested in Max Scherzer ($210 million), Stephen Strasburg ($175 million) and Patrick Corbin ($140 million) in the front end of their starting rotation.

Scherzer has three years remaining on his $210 million contract, Strasburg has five years left on $175 million deal and now Corbin with six.

The key part to remember is the Nats won’t be done paying once the contracts are finished as each deal has deferred money.

The Nationals have a formidable trio in the rotation, but it remains to be seen if the addition of Corbin will help them get back to the postseason.

The Arizona Diamondbacks made a painful decision as they traded the face of their franchise, who is first baseman Paul Goldschmidt to the St. Louis Cardinals early last week.

Welcome to Arizona! The #Dbacks have acquired right-handed pitcher Luke Weaver, catcher Carson Kelly, infielder Andrew Young and a 2019 Competitive Balance Round B draft pick from the Cardinals in exchange for Paul Goldschmidt. pic.twitter.com/ylANMvt8kU

The #STLCards have acquired six-time NL All-Star 1B Paul Goldschmidt from the Arizona Diamondbacks in exchange for C Carson Kelly, RHP Luke Weaver, INF Andy Young and the club’s Compensation Round B selection in the 2019 MLB Draft. #TimeToFly pic.twitter.com/65SThIrDli

The Diamondbacks are coming off a disappointing 2018 campaign in which they faltered during the final month of the season.

The Diamondbacks entered the offseason knowing they would have to make some tough decisions and trading Goldschmidt wasn’t easy, but it had to be done.

The team did discuss a contract extension with Goldschmidt before the trade, but couldn’t reach an agreement, per Nick Piecoro of the Arizona Republic.

The Diamondbacks had discussed a contract extension with Paul Goldschmidt prior to the trade but obviously were unable to reach an agreement.

They received solid talent in this deal as Weaver is a young pitcher with five years of control, Kelly has high upside as he’s solid with the glove and Young, who finished fifth in the Arizona Fall League with a .936 OPS is someone who can play all infield positions and gets on base frequently.

The major aspect of the deal for the Diamondbacks is adding Kelly.

They’ve struggled for several years to develop catchers, so adding Kelly was significant.

The Diamondbacks will be in rebuild mode next year, but the good news is they have seven of the first 70 draft picks in 2019, per Bob Nightengale of USA Today.

The #Dbacks will now have 7 of the first 70 draft picks in 2019 as they take a step back next season.

The Cardinals are receiving one of the best hitters in the National League.

Goldschmidt is a special hitter, and for someone, his size is deceptively fast, as he has swiped 124 bases in his eight-year career.

Over the past five seasons, Goldschmidt ranks fifth in MLB in fWAR, fifth in wRC+, third in on-base percentage, eighth in slugging percentage and eighth in walk rate, per Andrew Simon of MLB.com.

Over the past five seasons, Paul Goldschmidt is:

The @Cardinals are getting one of the game’s best. pic.twitter.com/7Sf1dkCVBf

Goldschmidt did spend his first eight seasons in hitter-friendly Chase Field, but making the transition to a new ballpark won’t be an issue.

Paul Goldschmidt has spent his entire career in Arizona, playing at hitter-friendly Chase Field. No need to worry about Goldschmidt transitioning to another ballpark though. He hit .339 with a .638 Slug pct and 1.053 OPS on the road last season (all career-bests). #STLCards pic.twitter.com/cDkK6fCTff

The Cardinals have been seeking to add a big bat like Goldschmidt in their lineup, and it’s at a bargain as well.

Goldschmidt will make $14.5 million in 2019 and become a free agent next year.

The Cardinals have spoken to Manny Machado and Bryce Harper this offseason, but the addition of Goldschmidt takes them out of the sweepstakes for either player.

It’s good for the Cardinals, as it would cost them more than double the salary for Goldschmidt to sign either Harper or Machado.

The Cardinals will have a dangerous lineup featuring Matt Carpenter who moves over to third base, outfielder Marcell Ozuna, catcher Yadier Molina, and Goldschmidt.

This trade worked out for both clubs, as the Cardinals get a big bat they haven’t had since Albert Pujols and the Diamondbacks acquire young pieces to help them in the future.

For your dedication.
For your heart.
For everything.

The Boston Red Sox have signed starting pitcher Nathan Eovaldi to a four-year, $67.5 million deal, per Mark Feinsand of MLB.com.

According to a source, Eovaldi’s deal is four years and $67.5 million.

He kicked things onto another gear in the postseason.

Nathan Eovaldi turned up the heat when it mattered most. pic.twitter.com/MVN62b6frw

Eovaldi threw 26 pitches which reached 100+ mph in October, no other pitcher had half that amount, per MLB Stats.

No other pitcher had even half that many. pic.twitter.com/sRGj47swla

He played a significant role in the Red Sox winning the World Series and received a very good contract for his performance.

A major question going into the offseason was could the Red Sox re-sign Eovaldi and that question has been answered.

We have signed Carlos Carrasco to a contract extension through 2022! ????

Cookie has the 7th best fWAR (18.2) among Major League pitchers since 2015, and led the Majors last season in cookies consumed (probably).#RallyTogether pic.twitter.com/dDEndEbqHx

The Cleveland Indians have signed starting pitcher Carlos Carrasco to a three-year extension, per Bob Nightengale of USA Today.

Carlos Carrasco’s new 3-year extension is worth $37.25 million with assurances that he will stay with the Cleveland #Indians, per @Ken_Rosenthal and @Joelsherman1 . Several teams who have spoken with Cleveland believe they’ll now try to trade Bauer, although Kluber still in play

The right-hander for the second consecutive year tossed at least 190 innings pitched, made 30 or more starts and struck out at least 220 batters.

Carrasco has been a stellar starter in the American League for the past couple of seasons, and though, the deal he signed was below market value, making the most money isn’t a priority.

According to Meisel, Carrasco mentioned, “I want to finish my career with the Indians.”

Carlos Carrasco: “I want to finish my career with [the Indians].”

If Carrasco continues to author seasons like 2017 and 2018, he’ll likely end his career with the Indians.