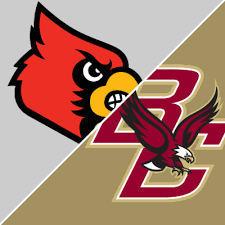 Outmanned and outgunned is the best way to describe what happened to the Boston College Eagles (1-3, 0-2) last Saturday night against Florida State. The Eagles have problems in all three phases of the game. They have given up a special team’s kickoff return for a touchdown (95 yards) on the very first play of the game. On defense, the Eagles had a very difficult time with the Seminoles offense allowing 500 yards of total offense of which 180 were on the ground. QB Jordan Travis was 19-of-31 for 350 yards. They gave up touchdowns on the next two series by FSU. On offense, they never could get started scoring their first points after the game was already 37-0 Florida State. Boston College begins the month of October with a two-game homestand that starts with this Saturday noon time kickoff vs Louisville.

The Cardinals (2-2, 0-2) lead the all-time series with an 8-6 record. BC has won three of the last five meetings between the two schools. Louisville QB Malik Cunnighman is a dual threat kind of player. He has accounted for 782 yards through the air, and 395 yards on the ground. Last week in their win over South Florida, Cunnighman was at his best throwing for 186 yards on 14-of-22 passing with one TD. On the ground, Cunnighman ran for 118 yards on nine carries and three scores. He averaged 12.5 yards per carry. Cunningham is now the third player in school history with 3,000 yards on the ground. He is now the eighth QB in NCAA history to have 1,000 yards passing and 3,000 yards rushing The offense gained 283 yards and four touchdowns on the ground with 259 yards through the air, and 542 yards of total offense. The defense did its job by holding the Bulls’ offense to 158 yards of total offense and forced three turnovers. Two areas of concern for the Cardinals are penalties (10 per game) and turnovers (two a game). Neither of these issues showed up last week at home vs South Florida. Although Louisville did commit five penalties in the game, it never came back to haunt them.

If there’s one thing BC has been good at through the first four games is not getting flagged. The Eagles are first in the league with the fewest penalties per game at four. They have the fewest penalty yards at 28.5 yards. They rank in the top ten in both categories. This week’s match-up will once again be a tough test for the Eagles defense. Playing assessment football will be key to keeping Cunnighman in check. The offense will have to stay on the field and sustain drives to keep the Cardinals offense off the field. This is a big game for both sides as no one wants to be 0-3 in conference play after this one.