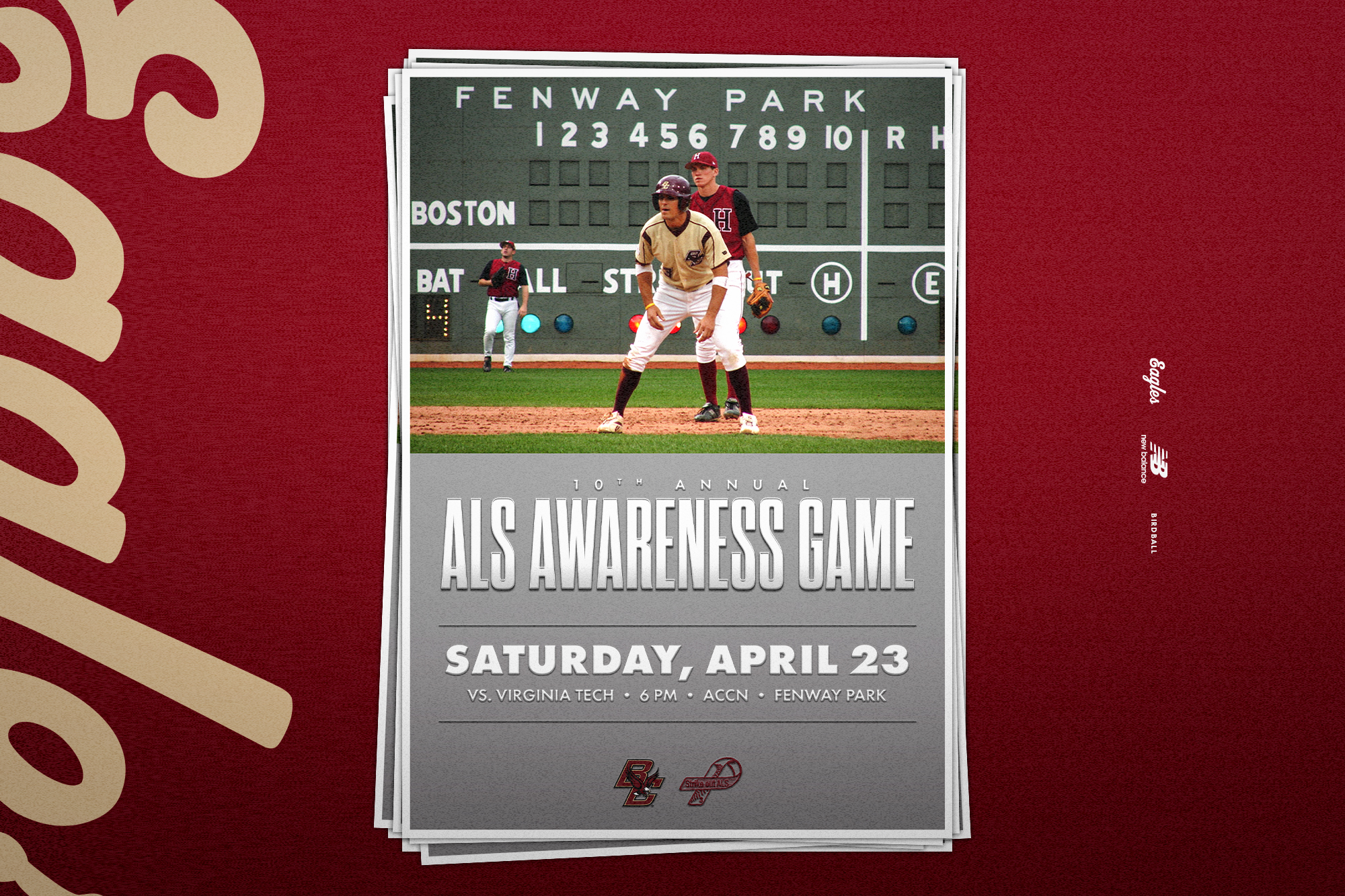 CHESTNUT HILL, Mass. — The Boston College 10th Annual ALS Awareness Game will be played at Fenway Park on Saturday, April 23 against Virginia Tech. The game will be broadcast nationally on ACC Network at 6 p.m. Tickets cost $10 with 100% of proceeds going to the Peter Frates Family Foundation to benefit families caring for individuals with ALS.

BC opens its home series against Virginia Tech Friday at 5:30 p.m. at the Harrington Athletics Village on the Brighton campus. Game two moves to Fenway on Saturday with the finale Sunday in Brighton. Saturday’s ALS Game will air on ACC Network with the other two games streamed on ACCNX. The Eagles are 15-22 overall and 3-15 in the ACC. Sophomore Travis Honeyman, who has played through a foot injury, leads the BC lineup with a .357 average. Junior second baseman Luke Gold is second at .355 with an ACC-leading 17 doubles.

BC trails the all-time series against Virginia Tech, 23-28. The series was even 6-6 as Big East rivals between 2001-2004 with the Hokies sweeping a series in the first-ever meeting of the two programs in 2001. Each team has held a significant advantage on its home field with BC posting a 14-7 home record and VT holding a 20-8 home record. Virginia Tech last visited BC in 2018 as the first ACC series played at the Harrington Athletics Village. BC won the series by taking the opener 7-4 and game two 6-2, on a walk-off grand slam by Dante Baldelli.

Pete Frates ’07 captained the Eagles his senior season and returned to the team as director of operations in 2012 following a diagnosis of ALS at the age of 27. A driving force behind the worldwide “Ice Bucket Challenge” in 2014, Frates helped raise over $220 million dollars toward research for a cure. In the summer of 2019, it was announced that BC’s new indoor baseball/softball facility would be named in his honor. Frates ultimately passed after a seven-year battle with ALS on December 9, 2019. In 2016, Frates’ No. 3 was retired at BC’s old Shea Field, and in 2017 he was awarded the NCAA Inspiration of the Year honor. The bucket from his own Ice Bucket Challenge at Fenway Park resides in Cooperstown along with his Boston College hat and glove from his playing days with the Eagles.